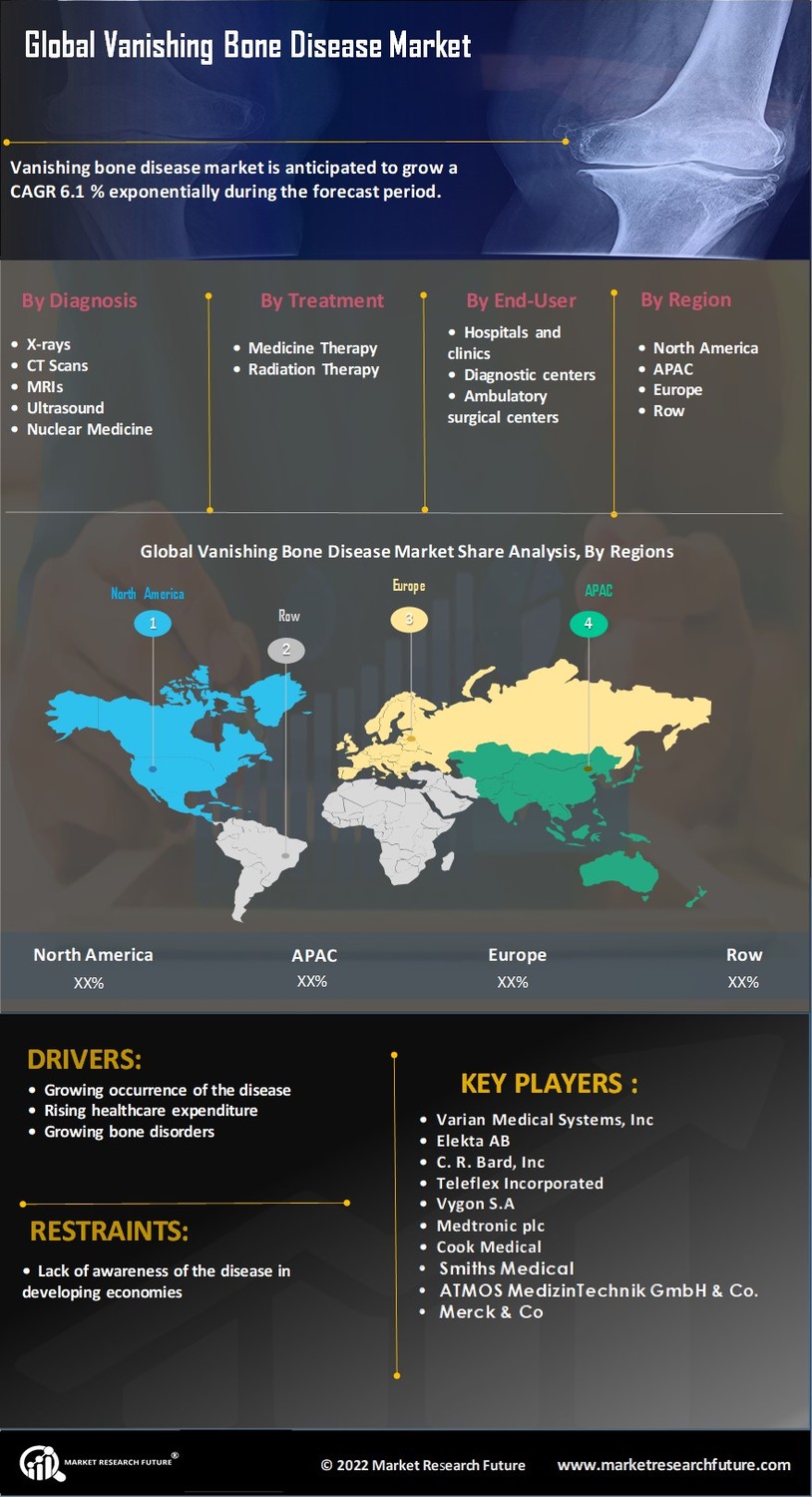 Vanishing bone disease or Gorham-stout syndrome is a rare skeletal disease characterized by progressive osteolysis and the proliferation of lymphatic vessels within the bone which leads to the destruction and absorption of bone. Additionally, the bones affected by the disease are more prone to osteopenia and fracture. Furthermore, the exact cause of the disease is unknown. However, it is considered to be caused due to the improper development of the lymphatic system.

According to the National Center for Advancing Translational Sciences (NIH), in 2016, the number of cases of vanishing bone disease reported ranged from 64 to 200 cases globally. The growing occurrence of the disease is the key driver for the growth of the market. Furthermore, current research for the development of an effective therapeutic intervention for disease treatment is expected to contribute to the growth of the market.

The global vanishing bone disease market is segmented on the basis of the diagnosis, treatment, and end-user.

On the basis of diagnosis, the market is classified as X-rays, CT scans, MRIs, ultrasound, nuclear medicine, and others.

On the basis of end-user, the global market is segmented as hospitals & clinics, diagnostic centers, ambulatory surgical centers, and others.

The Asia Pacific market is segmented into Japan, China, India, Republic of Korea, Australia, and the rest of Asia Pacific.

The global vanishing bone disease market consists of four regions: Americas, Europe, Asia Pacific and the Middle East & Africa. The North American region dominates the global vanishing bone market due to the existing well-established healthcare system, increasing occurrences of rare diseases. For instance, according to the National Institute of Health, rare disorders that affect approximately 30 million people in the United States.  Furthermore, according to the U.S. FDA, rare diseases or disorder affects an approximate 200,000 people in the United States.

Europe holds the second market share in the vanishing bone disease market. It is expected that the government support towards research & development expenditure and rising incidences of rare diseases is likely to drive the European market. For instance, according to the European Commission, rare diseases comprises 5000 to 8000 life-threatening or chronically debilitating diseases which together affect from 27 and 36 million people in the European Union.

The Middle East & Africa holds the lowest share of the global vanishing bone disease market due to lack of awareness of rare diseases, the low incidence rate of the disease and poor medical facilities, especially in the African region.

Market Research Future research is conducted by industry experts who offer insight into industry structure, market segmentation, Treatment assessment, competitive landscape (CL), penetration, as well as on emerging trends. Besides primary interviews (~ 80%) and secondary research (~ 20%), their analysis is based on their years of professional expertise in respective industries. Our analysts also predict where the market will be headed in the next five to ten years, by analyzing historical trends and current market positions. Furthermore, the varying trends of segments & categories geographically presented are studied and are estimated based on primary & secondary research.


Extensive primary research was conducted to gain a deeper insight into the market and the industry performance. In this particular report, we have conducted primary surveys (interviews) with the key level executives (VPs, CEOs, Marketing Directors, Business Development Managers, and many more) of the major players who are active in the market. In addition to analyzing the current and historical trends, our analysts predict where the market is headed, over the next five to ten years.


Secondary research was mainly used to collect and identify information useful for an extensive, technical, market-oriented, and commercial study of the vanishing bone disease market. It was also used to obtain key information about major players, market classification and segmentation according to the industry trends, geographical markets, & developments related to the market and Treatment Perspectives. For this study, analysts have gathered information from various credible sources, such as annual reports, SEC filings, journals, white papers, corporate presentations, company websites, the international organization of chemical manufacturers, some paid databases and many others.

What is Vanishing Bone Disease?

VANISHING BONE DISEASE or Gorham-stout syndrome is a rare skeletal disease characterized by progressive osteolysis and proliferation of lymphatic vessels within the bone, which leads to the destruction and absorption of bone.

What is the CAGR of the Vanishing Bone Disease Market?

Global Vanishing Bone Disease Market is expected to exhibit a strong 6.40% CAGR over the forecast period from 2022-2030.

What is the major driver for the Vanishing Bone Disease Market?

The growing prevalence of vanishing bone disease is the major driver for the market.

Which is the major regional Vanishing Bone Disease Market?

What are the key players in the Vanishing Bone Disease Market?

Leading players in the Vanishing Bone Disease Market include Elekta AB, Varian Medical Systems, and Teleflex Inc., among others.