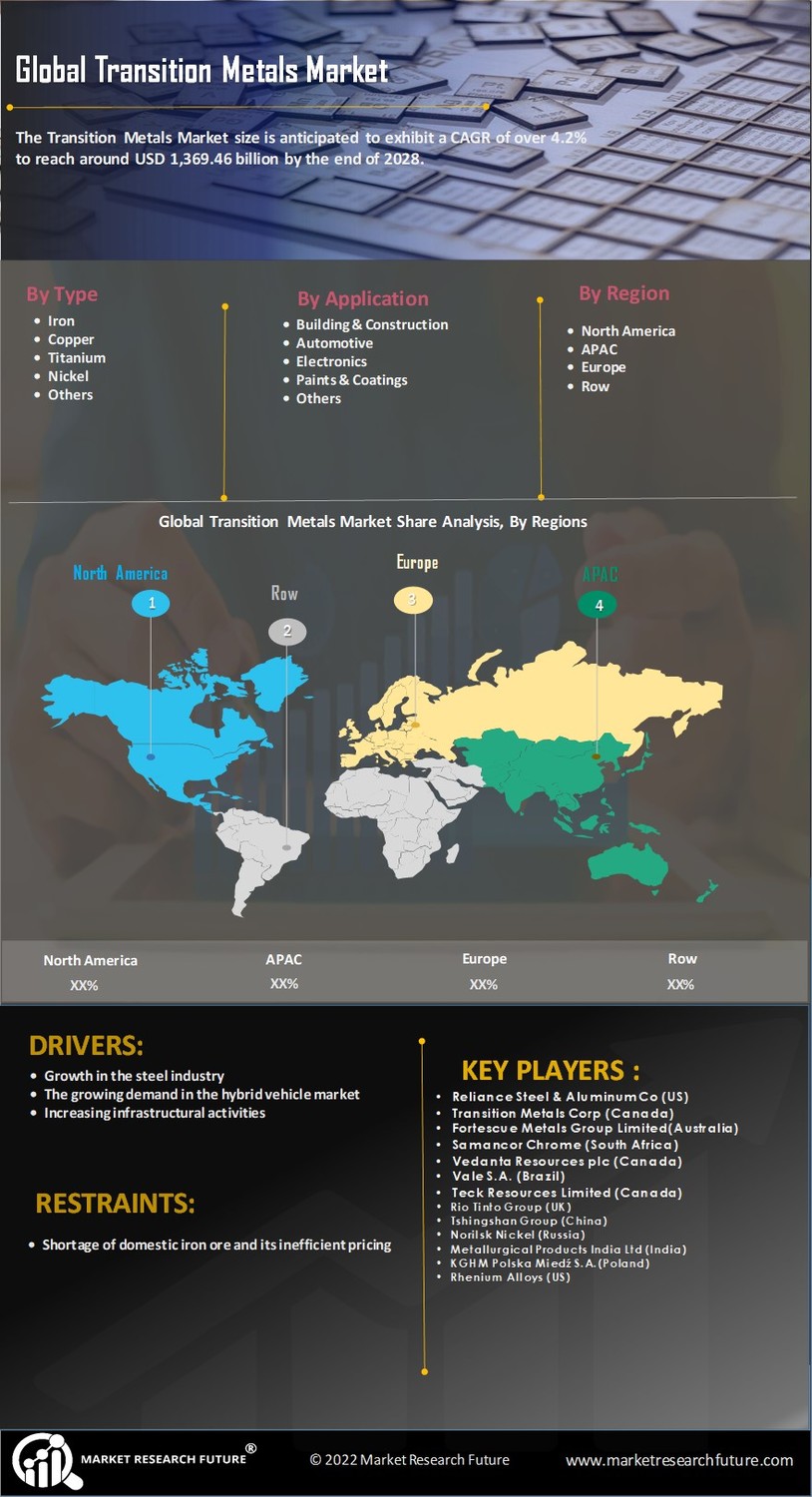 The term 'transition metals' refers to any element that belongs to the d-block of the periodic table, which includes groups 3 through 12. A transition metal is an element having a partially filled d-subshell and can produce cations with an incomplete d-sub shell on its atom. Iron, titanium, copper, nickel, manganese, cobalt, silver, mercury, and gold are some of the transitional metals having wide applications in various end-use industries such as automotive, electronic, building & construction, and paints& coatings, andothers.Iron is the most abundant metal found in Earth's solid crust, ranking fourth among all elements and second among metals in crystal abundance (after aluminum). Transition metals are generally harder, less reactive, and denser as compared to alkali metals.

Transition metalsoxides are utilized in various applications as catalyststo absorb other metals or substances onto their surface and activatethe oxidation process.

Transition metals play a vital role in human lifeas they are used in nutritional supplements, which is expected to boost the market demand in the nearer future. Various transition metals such as iron, cobalt, copper, and molybdenum are necessary to keep humans alive and healthy. Without enough iron in the bloodstream, the body cannot transport oxygen through the body. Other transition metals, like copper and cobalt, exist as trace elements in a body.

Nickel is commonly used as an alloying metal to create stainless and heat-resistant steel. It is combined with chromium and other metals to boost tensile strength, toughness, and elastic limit. Henceforth, increasing demand for nickel in the stainless-steel industry is expected to fuel the Transition Metals Market.

The impact of the Brumadinho dam catastrophe in Brazil (which threatened to restrict nickel output from Vale's holdings) and high demand from the stainless-steel sector in Chinawas countered by unfavorable macroeconomic consequences on the US-China trade war. Due to this trade war, the market’s supply chain gets disrupted and is projected to hindermarket growth.

Particularly, transition metals ion is an essential micronutrient for all livingorganisms and exerts a widerange of effects on human health. Transition metals such as copper, iron, zinc, andmanganese play a crucial role in various bacterial biological activities, contributing to the bacteria's overall evolutionary fitness. Copper and zinc are used to poison the bacteria. In recent years, transition metals have been shown to have regulatory effects on the gut microbiota in a growing number of investigations. As a result, the dosage of transition metals distribution in bacteria is strictly regulated.

Globally, the COVID 19 has affected the metal industry in several ways. Operations in many companies have been harmedthrough isolatedoutbreaks and imposition of lockdowns. The demand for many commodities has decreased, with an even lower near-term demand on the horizon.

Also, the disruption caused in the rapidly developing economy of China due to COVID-19 alone is projected to have a significant impact on the economies of several other countries across the globe. One of the key exceptions of this trend has been gold, which typically benefits from a higher level of uncertainty. China's manufacturing, metal, and mining industries are likely to resume operations as the country recovers from the COVID 19 crisis.

However, some difficulties are accentuated by a heavy production process, fluctuating demand and raw materials supply, and uncertain prices.

Iron, cobalt, and nickel are the only metalsknown to produce a magnetic field.

Jan 2022 The first of StrategX Elements Corp.'s holdings, located on the East Arm of the Great Slave Lake in the Northwest Areas, has been revealed. StrategX's generative efforts in the region resulted in the grassroots discovery of the 939 Cobalt property in 2018. The Company is prioritizing sites to conduct a first-phase discovery drill program, which will begin once permits are received. The Company's primary emphasis is on discovering energy transition metals, which are essential for the development of a "greener" economy. Cobalt is in high demand and is a crucial component of the global supply chain for manufacturing electric vehicles and other modern technologies.

June 2021 An alliance between researchers at the University of Illinois at Chicago's College of Engineering and Washington University in St. Louis' McKelvey School of Engineering has discovered a two-dimensional alloy material consisting of five metals rather than the typical two. It has also been verified to be a good catalyst for converting CO2 into CO, a first for such material, with potential uses in environmental cleanup. This breakthrough is based on a class of minerals known as transition metal dichalcogenides (TMDCs), which combine transition metals with a chalcogen, such as selenium, sulfur, or tellurium. The term "high entropy" refers to an alloy that contains more than three metals in almost equal proportions. The name of the material developed is high-entropy transition metal dichalcogenides given by the researchers.

At what CAGR is the Transition Metals Market predicted to grow during the forecast period?

Transition Metals Market is predicted to grow at Significant through forecast period of 2020-2027.

What is the forecast period of Transition Metals Market research report?

The forecast period for Transition Metals Market research report is 2020-2027.

Which region will lead the global Transition Metals Market?

What are the key factors driving the Transition Metals Market?

Who are the key players in the Transition Metals Market?

The prominent players operating in the Transition Metals Market include

What is the forecast period of Transition Metals Market research report?

The forecast period for Transition Metals Market research report is 2020-2027.

Which region will lead the global Transition Metals Market?

Growing Demand for Materials Across the Globe is Expected to Boost the Demand for Transition Meta...