There are a variety of tobacco products such as cigarettes, cigars, E-Cigarette & Smokeless tobacco for chewing or dipping, dissolvable tobacco, pipe, hookah-cigarettes. Growing population, changing lifestyle, and technology advancement are some of the factors that drive the market of tobacco packaging. Another driving factor of the market is equality laws for men and women, which led to a high number of female smokers.

Stressful life, increased workload, and hectic schedule are encouraging the consumption of tobacco. Introduction of smokeless tobacco for chewing or dipping and E-cigarettes are major trends in the global tobacco packaging market. Furthermore, diseases such as mouth cancer, and lung cancer caused by tobacco hinder the growth of the global market. Government and NGO’s are organizing anti-tobacco campaigns for raising the awareness of the hazardous effects of tobacco. Also, the World Health Organization (WHO) has also launched many projects such as mAwareness & mSmoke-free to control the consumption of tobacco.

Major strategies adopted by key players are joint ventures, divestitures, partnerships, new product launches and mergers. Recently, Amcor has made investments to improve its value proposition for its tobacco packaging customers both, in Europe and the Americas. 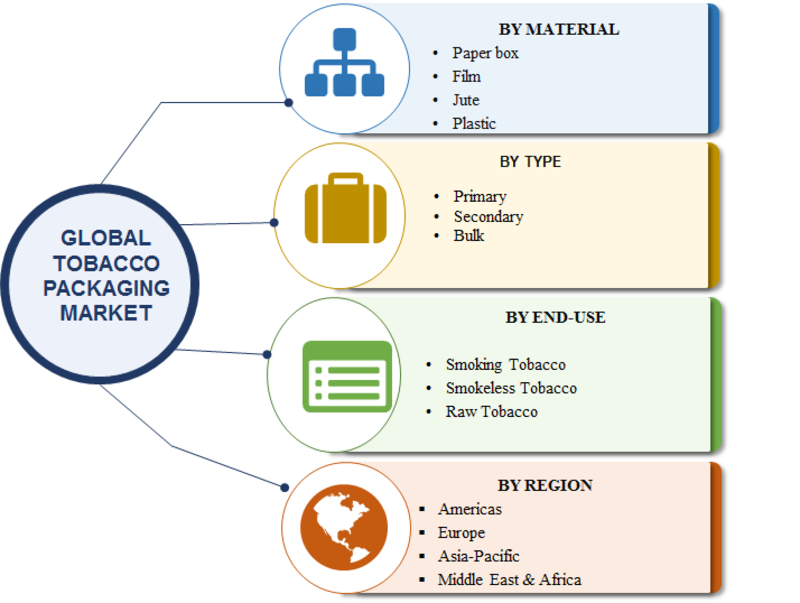 On the basis of materials, global tobacco packaging market is segmented into paper box, film, jute, plastic and others. Materials that are basically used for tobacco packaging include films, boards, cartons, foils, paper, laminates, and membranes. A recent trend shows that manufactures or the packaging industry mainly focus on paper box packaging due to its environment-friendly and cost-effective nature.

Tobacco packaging market is segmented on the basis of types as primary, secondary, and bulk. In 2016, the secondary segment had the largest market share, and is also expected to progress at the highest CAGR in coming years. For primary packaging, materials such as metalized films, polyester & nylon are used. Global tobacco packaging market has been segmented based on end-use into smoking tobacco, smokeless tobacco and raw tobacco. Smokeless tobacco include dipping tobacco, chewing tobacco, snuff, tobacco gum, tobacco gum and other.

Global tobacco packaging market, cigarette production has the largest share as it has become the center of attraction among the youth. Other reasons of growing market of cigarette is increase in consumption of cigarettes in social gatherings, which raise the demand for innovative and attractive cigarette boxes. So, different technologies used for the packaging of tobacco are offset printing, hot-foil stamping, and rotogravure.

China, Brazil, India, U.S., Turkey and South Korea are the leading tobacco manufacturing countries due to rapid economic expansion. In 2016, China was a top producer with production of about 2.8 million metric tons of tobacco. The factor driving the market in countries such as China and India are the growing population and increase in the population of youth in these countries. Brazil and Zimbabwe are the countries whose economies are currently dependent on tobacco production. Thus, the rising demand for tobacco products drives the tobacco packaging market. Moreover, the e-cigarette market has grown highly due to the fact that e-cigarettes are less harmful than smoking tobacco. Most part of the world’s cigarettes is consumed in the Western Pacific region.

Tobacco is basically prepared from the leaves of the tobacco plant. Tobacco belongs to the genus Nicotiana & nightshade plant family. To prevent it from bacteria, aroma transmission, a right quality of packaging is required. So, packaging plays an important role, as it provides information about product content, ingredient and keeps the product in perfect condition.

The report for Global Tobacco Packaging Market of Market Research Future comprises extensive primary research findings along with the detailed analysis of qualitative and quantitative aspects by various industry experts, key opinion leaders to gain deeper insight into the market and industry performance. The report gives a clear picture of current market scenario, which includes historical and projected market size in terms of value, technological advancement, macro-economic and governing factors in the market. The report provides detailed information and strategies of the top key players in the industry. The report also gives a broad study of the different market segments and regions.

What is the valuation of the global tobacco packaging market?

The global tobacco packaging market is expected to reach USD 16.65 billion by 2023.

What is the CAGR of the tobacco packaging market?

Global tobacco packaging market is expected to exhibit a strong 3.1% CAGR over the forecast period from 2018 to 2023.

What is the major driver for the tobacco packaging market?

The growing demand for cigarettes is the key driver for the tobacco packaging market.

What is the leading regional tobacco packaging market?

What are the key players in the tobacco packaging market?

Leading players in the global tobacco packaging market include Amcor Ltd., British American Tobacco, and Innovia Films, among others.