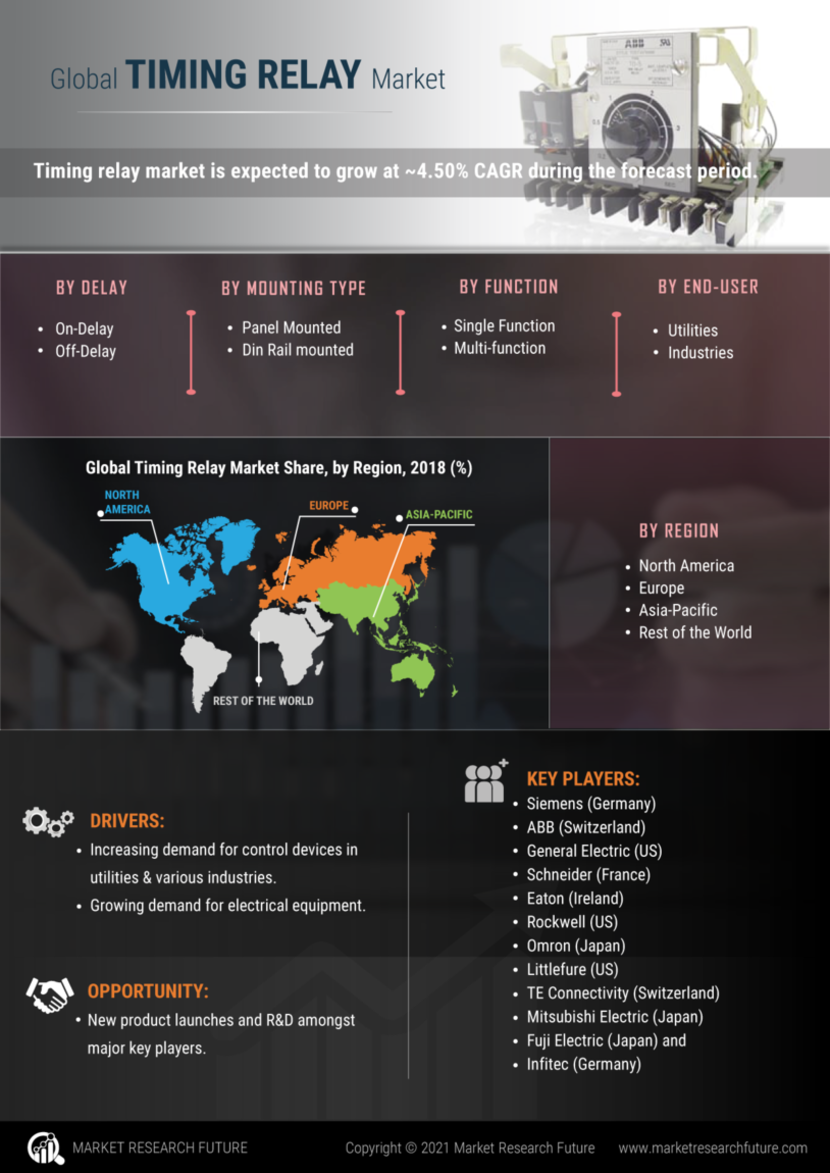 Timing relay market is expected to grow at ~4.50% CAGR during the forecast period.

Increasing demand for control devices in end-use industries is a major driver for the growth of the global timing relay market. Various industries are investing heavily in control devices to increase the production efficiency and simultaneously reduce error ratio. This would positively impact the timing relay market with increased manufacturing activities and power generation capacity addition.

The global timing relay market is projected to grow at a high rate during the forecast period, mainly due to the growing demand for electrical equipment globally. Market growth in this region can be attributed to increasing electricity demand and rising industrialization and urbanization. Countries such as China, Japan, and India are the key markets for timing relays in Asia Pacific.

The global timing relay market is expected to grow at ~4.50% CAGR during the forecast period.

Global timing relay market is expected to witness substantial growth during the forecast period owing to increasing investments in the power generation sector and continuous investment in industrial automation.  As per BP Energy Outlook 2017, the share of energy for power generation would rise from 42% in 2015 to 47% by 2035. This would lead to increasing investments in power generation sector which would drive the growth of timing relay. Moreover, it is estimated that over 1 billion people currently do not have access to electricity, mainly in Africa, India and other parts of developing Asia.  Thus, increase in the demand for electricity would result in growth of electrical equipment market which would drive the timing relay market in the coming years.

Timing Relay, also known as time delay relays, are switches that are controlled by a circuit. It provides simple and reliable control to start a motor, control a load, or affect a process. It is typically used in industrial applications where the timing needs to be locked in. Increasing demand for control devices in utilities & various industries and growing demand for electrical equipment is likely to drive the market for timing relays. For instance, according to the Indian Electrical and Electronics Manufacturers’ Association (IEEMA), the electrical and industrial electronics industry has witnessed growth of 12.8% in 2017-2018. This would have a positive impact on the growth of timing relay market.

Global timing relay market has been segmented based on timer, mounting type, function, end-user, and region. Based on timer, the market is classified into On-Delay and Off-Delay.  On-Delay segment is leading the market and has the largest market share, mainly due to easy implementation when compared to off-delay and other timers. The global timing relay market is further segmented based on end-users, including utilities, industries, and others. Utility segment of the global timing relay market is estimated to register the highest growth rate during the forecast period due to its ability to address problems such as load shedding, load restoration, motor loads, and under frequency protection of generators.

At what CAGR can the timing relay market surge?

By 2023, the timing relay market can soar at a high CAGR.

What is the estimated valuation for the timing relay market?

The timing relay market can garner high profits by 2023.

Who are key players of the timing relay market?

Omron (Japan), TE Connectivity (Switzerland), Littlefure (US), and Mitsubishi Electric (Japan) are some reputed names in the timing relay market.

What are the timing relay market drivers?

The hike in investment for power generation projects can impel the timing relay market expansion.

What is the regional analysis of the timing relay market?

The surge in need for controlled devices can prompt the timing relay market growth in North America.