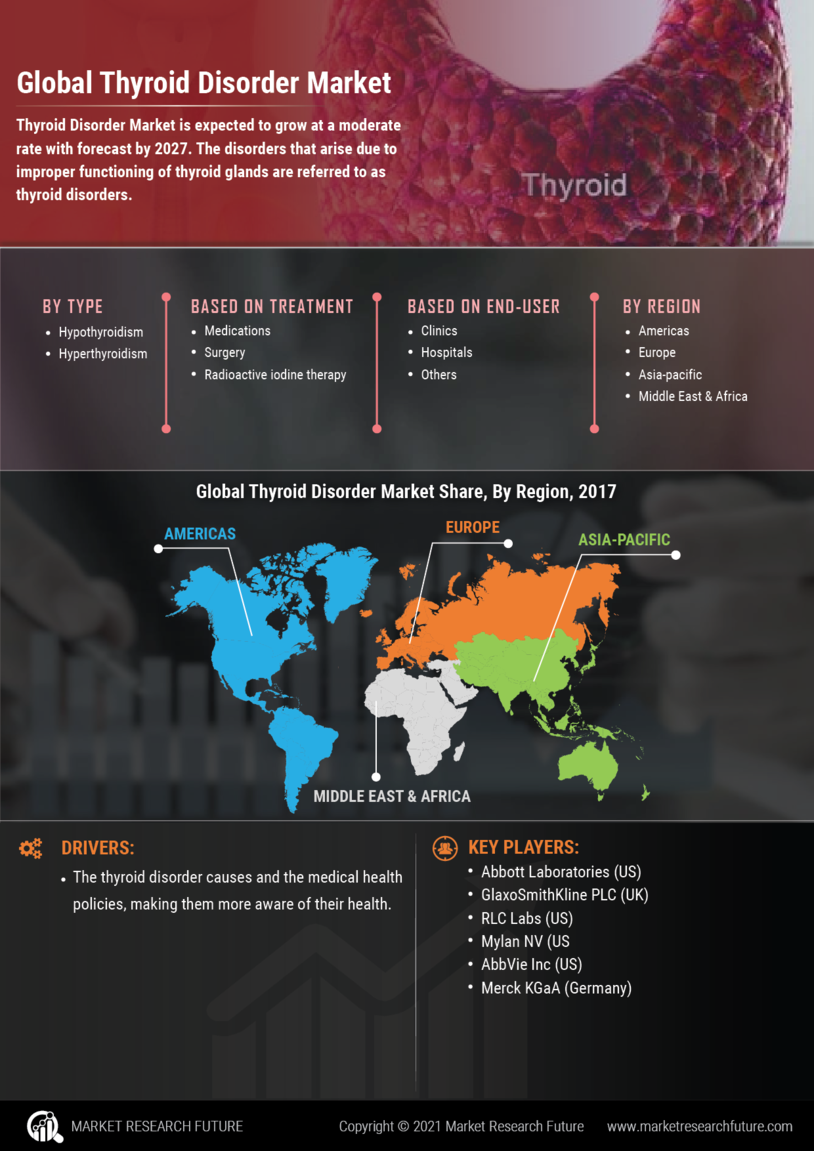 The thyroid disorder market is projected to reach USD 2120 Million by 2030 at 3.30% CAGR during the forecast period 2022-2030. These figures are indeed up-and-coming and ensure that the market has vast scope in the coming future. The disorders that arise due to improper functioning of thyroid glands are referred to as thyroid disorders. This gland is located at the middle level of the lower neck and is responsible for the secretion of the hormone known as thyroid hormone. The primary function of this hormone is to regulate the activities related to metabolism in the body. If an individual suffers from thyroid disorders, it leads to an increased or decreased level of hormones responsible for metabolism in the body. Such elevation or decrease in thyroid disorder symptoms causes hypothyroidism, hyperthyroidism, and many more. The main elements driving the thyroid disorder market are the fact that people are getting more awareness about the thyroid disorder causes and the medical health policies, making them more aware of their health. But factors that restrict or push back the market are the pensive procedures involved are relatively high and also have known to cause side effects.

The entire world has witnessed an unforgettable time with the COVID 19 pandemic attack. Lives for everyone have taken a turn. Businesses have been affected the most, and getting back to normal would take some time for sure. Even after utilizing resources and human resources, each company would require mentorship and guidance to ensure that they are on the correct track and cope with whatever they have lost in a short period.

The reports prepared provide insights about all thin depth analyses carried out by the experts over the last few months. The reports have a particular focus on the effect that the pandemic has bought on the companies. This is one of those cost-effective measures that have expertise attached to them yet are budget-friendly. They also provide the current situation of the market in various countries.

Thyroid-related disorders have been increasing each year. Thyroid disorder causes include bad eating habits or other related factors. According to recent research, more than 12% of the total population in the united states is suffering thyroid-related disorder, which is, in fact, a considerable figure. It's just in the states, but other developed and developing countries like India, UK, and many more have also seen a similar rise in the figures. Hypothyroidism is prevalent in a developed region like the United Kingdom, where around 27.7% of the total population suffers from the same. Type-increasing figures have given a boost to the thyroid disorder market size in the last few years. It has also been studied that thyroid-related disorders are even more common than diseases like cancer.

Marketing, production, and the distribution of the thyroid disorder market are regulated by FDA or food and drug administration. In Europe, it is controlled by EMA or European Medicines Agency. In a recent study, it has been revealed that FDA and EMA both have almost the same criteria for regulations of the products and services in the market. These organizations are being planned to make sure that drugs can be made available to people at many affordable rates. These keep a check of how the service and or products are being marketed and manufactured. The bodies that regulate the fact that the users with thyroid disorder symptoms get everything at affordable prices are not compromises on the quality have proved to bring sustainability and stability in the thyroid disorder market.

Various segments in which the market has been divided are

By type, the thyroid disorder market is sub-divided into:

There is three subdivision in the thyroid gland disorders treatment market :

Based on the route of administration

There are a further three sub-divisions based on the route of administration. These are:

These are further subdivided into three subtypes. These are:

The market is divided into the Americas, the Asia Pacific, the middle east, Africa, and Europe based in the regions.

The Americas dominate the thyroid disorder market size, mainly because of the high population suffering from one of the other thyroid-related disorders. According to a survey conducted in the year 2016, almost 13 million people suffer from these disorders. There has been advancement in medicines and thyroid disorder treatment procedures for thyroid-related conditions as well. Moreover, awareness among the population has to lead to growth and the market too.

The region that bags the second place is that of Europe. An increase in the number of pharmaceutical companies that export their products outside Europe has contributed to the market's growth to a great extent. Research and the development of medicines for thyroid-related disorders have been a main task foremost in Europe. Not only this, but there has been a sharp increase in the investments made in pharmaceutical logistics, which is also a critical factor in the growth of the market in Europe as per the latest thyroid disorder case study.

The fastest-growing thyroid disorder market share is that of Asia Pacific, which can be considered the destinations outsourced for clinical trials, testing, and manufacturing of drugs. Sideways, third-party pharmaceutical companies are also looking to expand their business in developing countries like India, Singapore, China.

Here is a list of the key contenders of the thyroid disorder market according to the latest thyroid disorder case study. Pfizer Inc (US) can be considered the top-notch company that leads the thyroid disorder market. The companies that also have a significant role in the market are AbbVie Inc (US), Merck KGaA (Germany). Not to forget a few others that have emerged as influential players in the last few tears. There are Abbott Laboratories (US), GlaxoSmithKline PLC (UK), RLC Labs (US), and Mylan NV (US). As can be seen, most of the key players are from the united states. Reason being that it dominates the thyroid disorder treatment market for the highest population suffering from such diseases. The strategies that all of them have been following to reach today include product development, expansion, and innovation.

Recent development in the thyroid disorder market are

• In November 2015, a program that focuses on managing the daily routine of those having the life-long condition of hypothyroidism was launched by Abbie under Good Morning Hypothyroidism (GMH).

• In October 2016, ThyroTest was introduced by Abbott acquired Alere Inc., a service provider organization and a diagnostic device manufacturer introduced in the market, which is a test to detect hypothyroidism.

• In March 2018, an orally available tyrosine kinase inhibitor was discovered by Eisai.

• Also, in the same month, it was announced by Eisai Co Ltd and Merck about their strategic collar radiation. They are popularly called MSD after the collaboration.

• The commercialization of LENVIMA was also done in the year 2018.

A market that is all set to reach a CAGR that equals a great figure is the global thyroid disorder market. While the population is experiencing an increased rate of thyroid disorders, the growth that the thyroid disorder market share has seen and is expected to see is tremendous. Rising awareness about the illness is another factor contributing to being the growth of the market. On the other hand, in developed or underdeveloped countries, the market's development is sluggish due to the availability of inadequate health facilities, high cost of thyroid gland disorders treatment market, and lack of awareness. The trend and growth of the market are increasing slowly but would take a little time.

What will be the possible market valuation of the thyroid disorder market?

The global thyroid disorder market is predicted to touch USD 2120 Million by 2030.

At what CAGR is the thyroid disorder market expected to grow over the forecast period?

Which region is predicted to lead the thyroid disorder market?

The Americas is predicted to lead the thyroid disorder market during the forecast period.

Who are the key competitors in the thyroid disorder market?

Name the end-user subtype that dominates the thyroid disorder market?

It is most likely that hospitals will dominate the market.