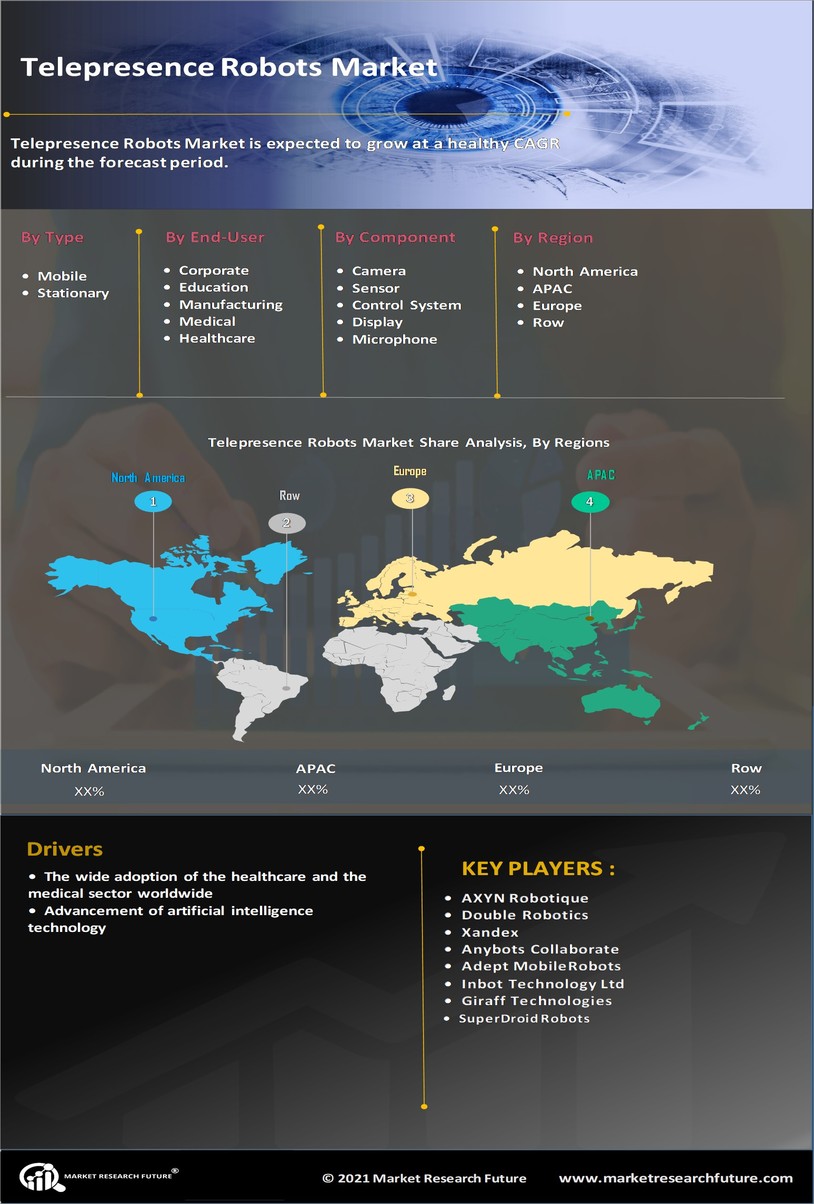 Globally, the Telepresence Robots Market will obtain a substantial CAGR value and significant market valuation in the forecast period by 2027 driven by artificial intelligence technology has been advancing along with the major increase in medical sensations.

The market is progressing due to its increased demand from the healthcare sector. The medical sector is highly adopting this technology due to its various advantages. This factor helps to socialize with elderly patients, and it is widely adopted in the medical.

Telepresence robots can facilitate virtual communication between doctors and patients across the world by connecting them with HD audio and video. It has made it easy for the patients to discuss their health issues with doctors in real-time. It also provides medical education by HD audio-visual recording. Therefore, this has become an essential part of clinical training. Due to these requirements and advantages, the Telepresence Robots Market notices great demand.

The healthcare and the medical sector are the primary drivers of the market. The advancement of artificial intelligence technology in medical sensations is also accelerating the market. The higher usage of smartphones is also fueling the market’s growth. The players are focusing on developments to upgrade the market trends and bring up automation with the operations. These factors are upgrading the Telepresence Robots Market size.

The covid 19 pandemic has affected millions of people residing in different countries across the globe. However, the pandemic has been disrupted by several supply chains that severely lockdown the government's hands. Hence restrictions have affected the global economy that trade volumes due to the disturbed supply and demand. Apart from that, the drones have been particularly wide due to sanitization, an increase in the safety and sanitation has been evolved. Further, the effectiveness of the no contact delivery has been projected to fuel up the Telepresence Robot Market growth within the future.

Moreover, it has been observed that tele presence robotic systems along with the increased demand of AI facilities within smartphones has become one of the most useful applications that fights against the pandemic in public places. Hence, the stated factors have been increasing in demand for bringing automation for operational management within the commercial government sectors across the world.

The driving factor that has been considered as the key marketing insights that mainly includes the wide adoption of the healthcare and the medical sector worldwide for the better presence of the Telepresence Robot Market. Apart from that, it has been observed that the advancement of artificial intelligence technology has been advancing along with the major increase in the medical sensations. Further, it has been addressed that an increase in the utility of the smartphones has been addressed that operates to be one of the key major findings of the stated market research. Thus, an increase in the trends for analyzing the bring up of automation along with the operations for the enterprises.

The data breaches and the security has been well addressed and it details that the operational failures along with the high technical complexities has contributed the major growth of the Telepresence Robot Market as a major challenging factor. Furthermore, it has been observed that the ongoing advancement within the software and the hardware technologies has been addressed that identifies the importance of the internet connection.

An increase within the restarting factors has been in a limited section that regulated the  electronic slanted for the advancement of the communicational facility within the system. Hence, the increment in the transfer of the data through electrical infrastructure has been executed. The focusing aspects of the stated center have been simplified to lower the cost of the overall segments.

The Telepresence Robot Market growth has increased due to the high demand and during covid, the growth was expected to rise even more with outstanding opportunities within the global market.

The research analysis on the concise market has been based upon the telepresence robotic system market along with the innovative technology that have been used in different perceptions. Further, the applications of the artificial intelligence technology have been detected that provide advanced solutions as well Therefore, it has been detected that the stated electrical infrastructure has abbreviated the formulation of the different perspective that mainly includes the various purposes of increasing the trend of the automation and the increasing usage of the smartphones along with the new technologies for better effective effect on the stated market.

According to the global analysis, it has been observed that the global telepresence of the robotic system has been geographically distributed. It states that North America appreciates to hold the position of the global Telepresence Robot Market within the maximum share philosophy. technological advancement has been adopted that initially serves the highest share of the market with a presence of the key players as well. This states that high technical skills, developed network facilities along with the influencing growth of the future that acts as the driving factors as well.

Canada and Mexico have been addressed as the project that contributes the high rate of the overall growth that invades the market sensation during the forecast period. Lastly, it can be stated that Asia Pacific has been standing second in the coming years of future growth. Thus, it stands in the robot market and has the expectation to witness the growth for the future run.

According to the recent update, the new companies that have been joining the Telepresence Robot Market of the particular company have created a scenario for new innovations, and the strategies.

Shortcut Robotics, a Los Angeles-based start-up, continues the beta testing of its first telepresence robot. The tests are conducted in two phases to deliver updates between each phase. The robots operate as driveable video calls and give manoeuvring ability around a remote environment. There are interact naturally with the people. The Shortcut robot imitates a user’s physical presence and offers automatic height adjustment for users.

OhmniLabs has declared its partnership with a Service-Disabled Veteran-Owned Small Business- Lovell Government Services. This partnership is for adding OhmniClean and Ohmni Telepresence Robot for major government contract vehicles. This development is highly significant because it streamlines the acquisition for government customers and helps the government entities with their Service-Disabled Veteran-Owned Small Business procurement goals.

This particular report is entitled to provide all the important facts and information regarding the growth of the largest market share of the robotic system market within the forecast period. Apart from that, the different section has been available that helps to get within the depth information that includes mainly the opportunities, drivers, challenges, regional analysis, covid 19 analysis. Telepresence Robot Market segmentation, and others. Therefore, all of the facts collected have been from the primary and the secondary sources that are entitled to provide information regarding the application of the artificial intelligence automation with technological processing in the future growth of the Telepresence Robot Market.

What motives are estimated to stress the growth of the telepresence robots market?

The upsurge of demand from medical, corporate, healthcare, and educational institutes are expected to provide this market with an influx of opportunities.

Who are the top players in the Telepresence Robots Market?

By the regions, which regional market is likely to motivate the telepresence robots market in the forecast period?

The North American region is at the vanguard of development in the market due to the presence of advanced network technologies.

How is the competitiveness in the telepresence robots market?

What is the income generation capacity of the telepresence robots market?

The market is expected to perceive a promising growth potential in the forecast period.

What are the segments in the analysis of the telepresence robots market?

Type, end-user, components, and region are the notable regions in the study of the global market.

PadBot, VGo, Ohmni and Beam Telepresence Robots Are The Key Driving Force For The Growth Of The M...