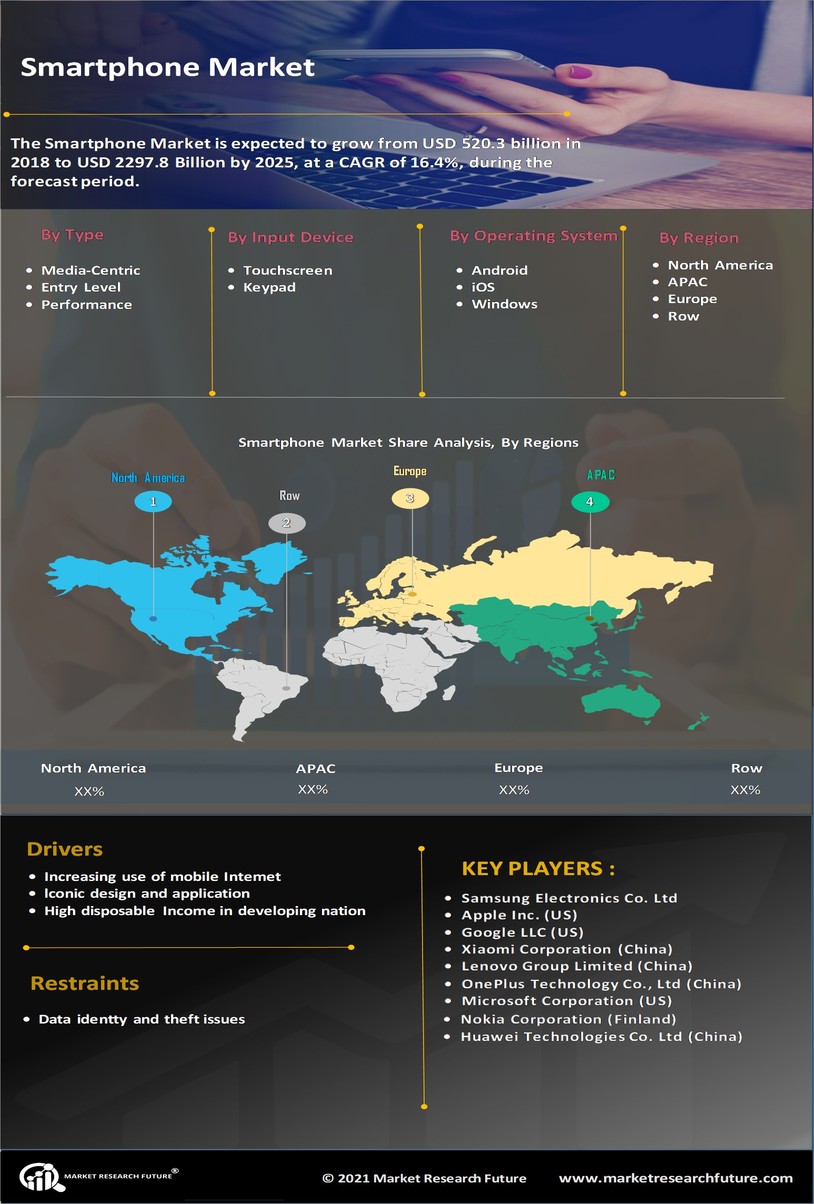 A smartphone is a category of mobile phones differentiated from feature phones by the stronger hardware, software capabilities, and broad mobile operating systems. A huge range of features is available on a smartphone, including multimedia functionality consisting of video, gaming, music, camera, voice calls, video calls, and the internet, including wide software functionalities and web browsing. Different operating systems are used in smartphones, such as iOS, Android, Windows, Blackberry Operating System, and others. The growth of social media platforms such as Twitter and Facebook has raised smartphone use. Over the years, smartphones have massively progressed. They are combined with innovative technologies with a global positioning system, gyroscope, flash memory, optical fingerprint sensors, near field connectivity, increased reality, virtual reality, etc. The Smartphone Market is estimated to grow from USD 520.3 billion in 2018 to USD 2297.8 Billion by 2025, at a CAGR of 16.4%, during the predicted period.

Due to the Covid-19 situation, all small businesses, medium and big, are facing a downfall in revenue. Specific government rules limit the gathering of people, which hugely disturbs the companies running online. However, with the arrival of vaccination, everything is going back to normal. It is expected that by 2023 things will get back to normal, and business will grow.

The main factors that operate the use of the smartphone market are premium design of smartphone adoption, high disposable income, high internet connectivity use of mobile internet, and increase in population technical approach. Smartphones are radical devices that make every task easy in just a few clicks. Though, smartphones carry a mixture of integrated computers and other features such as web browsing and operating system that makes them exceptionally best.

Due to the situation of Covid-19, all businesses small, medium, and big are facing a downfall in revenue. Certain government norms restrict the gathering of people which hugely affects the businesses running online.

However, the vaccination drive may soon get everything back to normal. It is expected that by 2022 things will get back to normal and business will flourish.


The major factors that drive the use of the smartphone market are high disposable income, premium design of smartphone adoption, high internet connectivity use of mobile internet, increasing population technical approach. Smartphones are revolutionary devices that make every task easy in just a few clicks. However, smartphones carry a combination of integrated computers and other features such as operating system and web browsing that makes them exceptionally the best.


Factors that provide opportunities for the growth of the smartphone market are an increasingly young population, the need for a device to stay connected, browse the internet, click pictures, use social media, etc. All these tasks can be easily performed with the use of smartphones in just a few clicks, smartphones come in handy. Identities include smart smartphone manufacturers and their investment heavily in research and development to incorporate new technologies which are attracting customers. New launches and updated products in the market hype up the need to have the latest version of the smartphone. These are some of the opportunities that contribute to the market growth.


The smartphone market growth is however declining due to a few factors. These factors include data identity and data theft issues which affect the growth of the smartphone market. The interface usually doesn't function smoothly due to a load of work such as digital media player from music, loading photos, and videos through a single interface.

Given below is the segmentation of the market-

Based On The Type:

Based On The Operating System:

Based on operating systems the smartphone market has been segmented into Android, iOS, and windows.

Based On The Distribution Channels:

The Smartphone Market is divided based on distribution channels into OEM, retailer, and e-commerce.

Based On The Input Device:

The division of input devices in the smartphone market is divided into screen and keypad.

Based On The Region:

Based on the region, the divisions are made into regions namely North America, Asia Pacific, Europe, South America, and the Middle East and Africa.

Based on region the smartphone market is divided into the Asia Pacific, North America, Europe, South America, and the Middle East, and Africa.

The region of Asia Pacific is segmented into countries of India, China, Indonesia, etc. The smartphone market in the region of Asia Pacific experiences high growth due to factors such as increasing per capita and come in the region, the presence of a massive population within increasing disposable income, and also there is a growing interest in the population to use new technologies and services. Companies such as Jio, Airtel, etc. In India, they are slowly adding up to the adoption of smartphones and also increasing their demand by providing data at the lowest cost possible.

The region of North America and Europe are among the countries which witnessed a bit of decline in revenue and shipment. This downfall is due to the maturity in the market, however, the growth is still witnessed in the smartphone repair market as customers do not frequently like changing their old smartphones in these regions. However, there are some regulations and rules implemented by the government to drop the roaming charges from all the networks which have held it to minimize communication costs for the consumers.

The Middle East and Africa are expected to show some increasing growth from 2020 to 2028, This is followed by the region of South America. The factors for such increasing growth are due to growing network coverage in rural areas, and increasing the affordability of mobile devices and tariffs.

All these prominent key players play a major road in the dynamics and growth of the smartphone market. These major key players opt for many strategies and policies to widen their customer base. These policies and strategies mainly include collaborations, mergers, acquisitions, extensions, joint ventures, establishments, new production processes, innovations, technology widening the existing products, partnerships, etc. All these important methods are opted to get the needs of customers and develop a strong potential growth base.

According to IDC, smartphone Shipments Declined 8.9% in the First Quarter as Global Demand Softened.

As of 2020, The Smartphone Market is expected to grow from USD 520.3 billion in 2018 to USD 2297.8 Billion by 2025, at a CAGR of 16.4%, during the forecast period. The global smartphone market in the global market research report consists of the following elements

Which Are Mentioned Down Below-

What is the growth scope of the smartphone market?

Who are key players of the smartphone market?

What are the types of smartphone?

What are smartphone market drivers?

What is the regional analysis of the smartphone market?

The penetration of e-commerce to cause the smartphone market in APAC to boom.

What is the smartphone market?

Who is leading the smartphone market?

Big players like Samsung Electronics Co Ltd, Apple Inc., and Xiaomi Corporation are expected to dominate the smartphone market during the forecast period