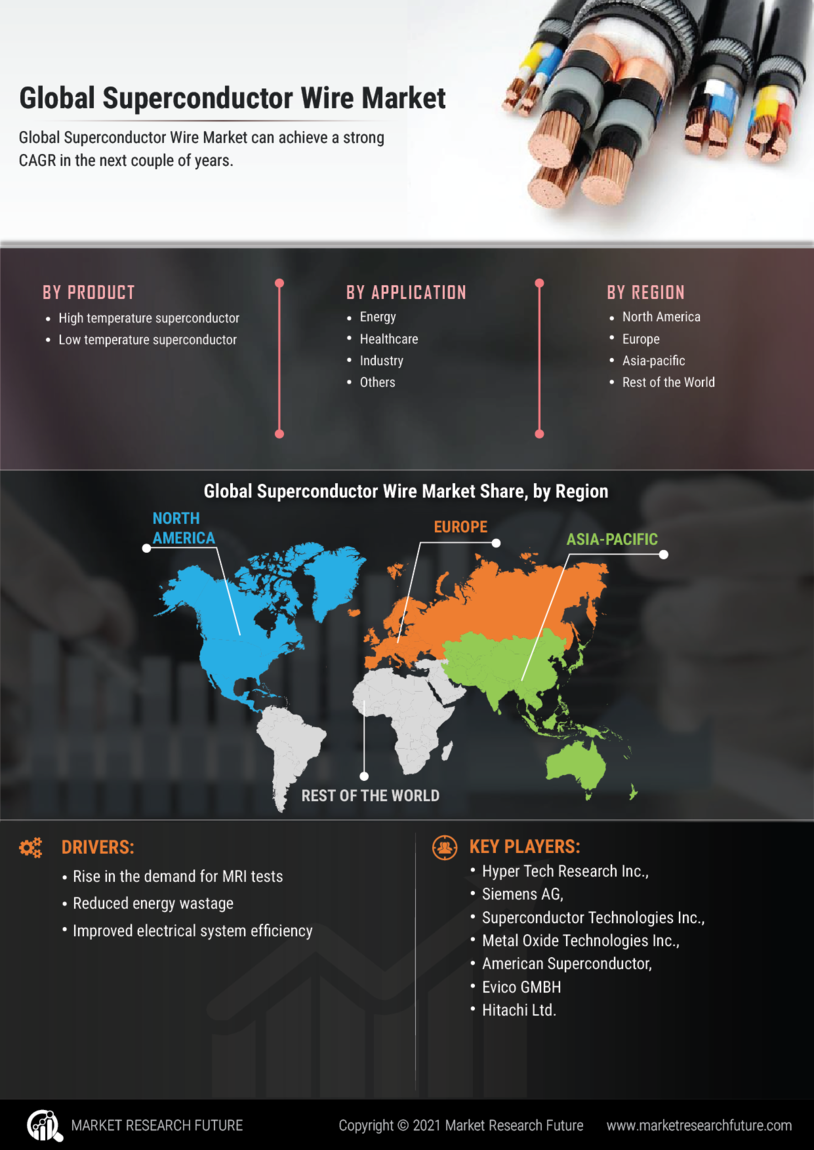 Besides, high-temperature conductors like YBCOP generally offer higher benefits than copper and aluminum materials. As the latter consists of current densities with zero power dissipation. Superconductor wires are widely used like magnets in scientific and medical equipment. The demand for computer-chip technologies are increasing over the years due to which superconductor wire market growth

On the global fronts pandemic has impacted the industries severally. National lockdowns have reduced market functioning due to which supply chain disruption has increased. Due to delays in production and distribution, facilities are suffering losses. Also, the pandemic crisis has reduced investment capabilities which have also impacted the market growth.

However, there has been growth in superconductor-based magnetic resonance imaging systems. Along with improved demand for advanced computer chip design technologies. High voltage transmissions provide efficiencies due to which superconductor cables demand will be increased.

Opportunities- Superconductors have zero resistance due to which it is used in varied applications. It has emitted no heat, sound, and other elements. Due to this, it has been widely applied in generators, motors, and power transmission lines.

Moreover, over the years there has been an increasing need for transportation, medical, industrial processing. Due to which manufacturers in the superconductor wire industry can reap various market opportunities.

Challenges- Superconductors are associated with high expenses. They are required to be maintained at specific temperatures. The magnetic field is often supplemented for avoiding internal forces of which the maintenance is quite expensive.

Cumulative Growth Analysis- The technology of superconductors helps in developing motors and generators which are much lighter, small in size, and efficient in energy. There have been continuous technological advancements that have pushed superconductor wire market growth.

Also, development has improved the performance limits which include endurance of high temperatures and magnetic fields. The superconductors can be replaced with conventional copper wires. In recent years, the superconducting wire market size is expected to grow at a higher rate due to an increase in electrical applications. For instance, South Korean Company has been collaborated with American conductors for building 10Km power lines in Seoul.

Value Chain Analysis- There have been global initiatives for developing smart cities. Hence, superconductor power lines will be highly demanded due to their features of reducing transmission loss. Along with the provision of a cost-effective supply of power to the cities.

Superconductor power lines reduce environmental damage, as digging up ground conduits is eliminated. Also, they can be easily integrated with existing power lines due to which government incurs high-cost savings. Superconductor wires are compatible with the regulatory frameworks. Due to this, superconductor wire market growth will be propelled.

The market is high conglomerated and can be divided into types, applications, and regions.

Based on Type- It further includes low and medium temperatures& high temperatures superconductors. The latter is further subdivided into first- and second-generation HT superconductors. Besides, low-temperature conductors are cost-effective, hence are expected to gain higher market growth. Owing to its increased usage in NMR, superconducting magnetic energy storage (SMES), and others.

Based on Application- It can be further subdivided into energy, medical equipment, research, industry, and others. In end-use sectors, the healthcare industries will capture a higher market share due to increased demand during 2022-2030.

Based on Region- It includes North America, Europe, Asia Pacific, and others.

Competition in Superconductor Wire Market size is not very intense as no dominant player exists. Key market players are listed below

The superconducting wire market size is majorly scattered between North America, Asia- Pacific, and Europe. North America will capture the highest market share during the forecast period. The region has been making developments in superconductivity for implying feasibility in practice.

Academic institutions like Houston university and Massachusetts Institute of technologies are working on research on superconductors. This will help in broadening its applications in medical, energy, and industrial applications. Also, Asia – Pacific will be the largest growing region due to the high presence of manufacturers and users as well.

Europe is estimated to reach higher market demand due to higher demand for efficient energy electrical devices. It is estimated that the US market will hold a share of US$339.7 million. China's market will grow at a CAGR of 5.3% with a market value of US$2020 million by end of 2030. Japan and Canada are estimated at a CAGR of 2.9% and 3.9% each.

In the European region, Germany will encounter a higher growth rate with a CAGR of 3.5 % by 2030. The global market has been adopting superconductor power lines at an increasing rate for few years.

What is the estimated CAGR for the forecast period?

It is estimated that superconductor wire market growth will reach an approximate CAGR between 4- 6%.

Mention some key players in the market?

What are the main drivers for superconductor wire market growth?

What are the market restraints?

There is a lack of testing centres while high capital costs of superconductors will restrict the market growth during the forecast period.

Which segment will encounter high growth?

Which will specific region will contribute to high market growth?

It is estimated that North America will capture the highest market share. As the region has been conducting developmental projects in superconductivity. Also, Asia – Pacific will be contributing significantly due to the presence of manufacturers in this region.

What is the impact of a pandemic on the industry?

Globally, the pandemic has impacted many industries severally. Owning to the national lockdowns which have reduced market functioning. This has resulted in supply chain disruptions of production and distribution, Also, the pandemic crisis has condensed investment capabilities. However, the superconductor wire industrycan expect high market growth in upcoming years.