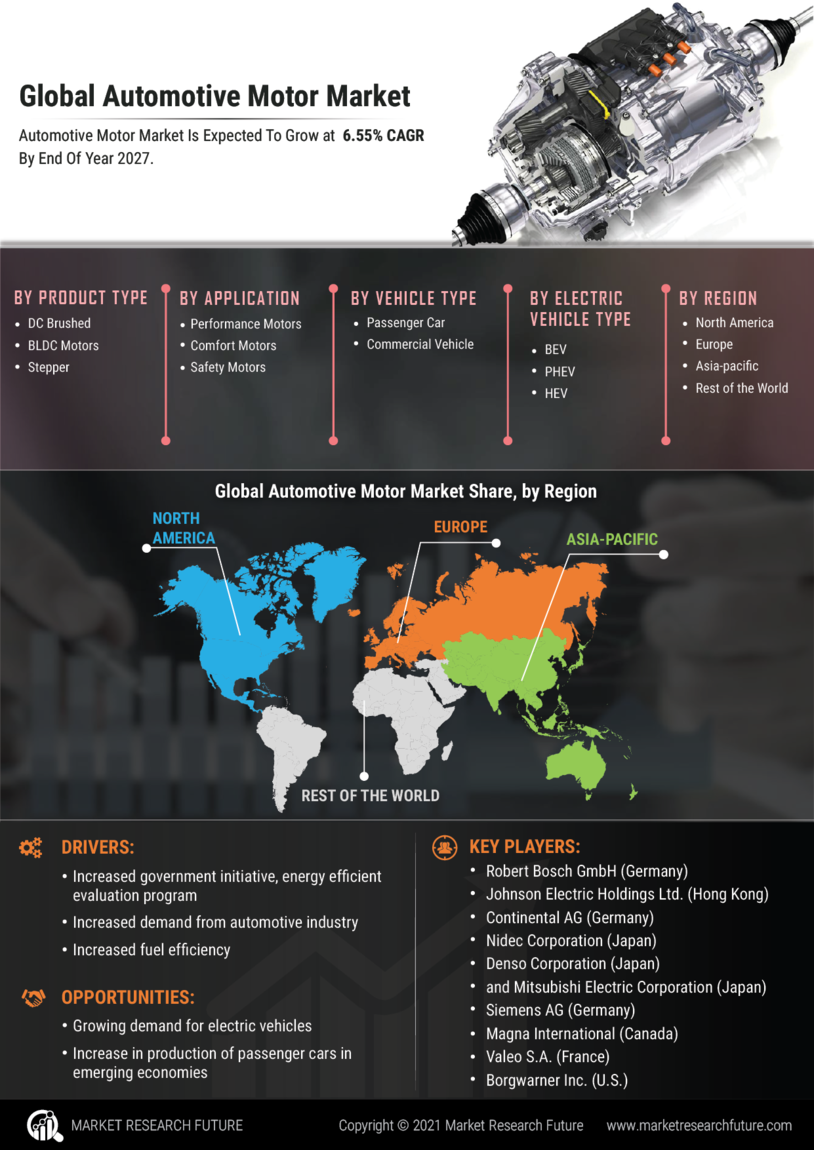 The global automotive motor market is estimated to witness a 6.55% CAGR during the forecast period.

The factors that are responsible for the growth of automotive motor are increased government initiative, energy efficient evaluation program, increased demand from automotive industry, and others. Government have taken various initiatives to improve the efficiency of the motor. According to Office of Energy Efficiency & Renewable Energy, there has been a significant investment of about USD 25 million for the advancement of technology to provide energy-efficient motor. The department of energy have taken up various projects by Next Generation of Electric Machines which will enable them to get fund opportunity. The initiative will leverage the manufacturers of motors with advanced technology made in nanomaterial’s research with improved performance. The improved performance of automotive motor will result in the growth of the market during forecast period. The increased demand from automotive industry is majorly due to growing demand for electric vehicles. The most popular electric vehicle manufacturer Tesla is equipped with high-speed motor with a 3-phase electric induction motor. The increase in demand from the electric vehicle manufacturers will result in the growth of the automotive market.

The automotive motor is designed to convert one type of energy into mechanical energy. They are an integral part of vehicle components because of its wide use in engine cooling fan, power steering, battery cooling, and other systems. The electric motor in automotive convert’s electrical energy into mechanical energy and pneumatic motors uses compressed air. The motors in automotive are used in internal combustion engine, high-speed motor, and others. In comparison internal combustion engines with high-speed motors, which are used in automotive, high-speed motor are double efficient than internal combustion. The motor in vehicles have wide applications, which include performance motors, comfort motors, and safety motors. The performance motor improves the overall efficiency of the vehicle,comfort motor provides increased riding capability, which increases the demand of the vehicles in future.

By region, the market is segmented based on North America, Asia Pacific, Europe, and Rest of the World. Asia Pacific is expected to dominate the market during the forecast period due to the growing production of passenger and commercial vehicle in emerging economies. The attribution of the growth is majorly due to countries such as India, China, and Japan where there is increased production contribution by the OEM’s. There are various government regulation, which have mandated safety features in vehicle such as airbags, ABS, and others. The increased safety feature components require installation of motor which will increase the demand for the market in future. North America is expected to be the second largest market in automotive motor. In North America, U.S. is expected to dominate the market due to growing demand for safety features to be installed in the vehicles

The report for Global Automotive Motor Market of Market Research Future comprises extensive primary research along with the detailed analysis of qualitative as well as quantitative aspects by various industry experts, key opinion leaders to gain the deeper insight of the market and industry performance. The report gives the clear picture of current market scenario which includes historical and projected market size in terms of value and volume, technological advancement, macro economical and governing factors in the market. The report provides details information and strategies of the top key players in the industry. The report also gives a broad study of the different market segments and regions.

The market is believed to be performing significantly backed by a number of favorable factors and trends as well as opportunities.

What is the use of automotive motor?

The automotive motor helps convert a type of energy into mechanical energy and is an important part of a vehicle.

Which country is expected to dominate the north American market?

The United States is expected to dominate the north American market.