Please note that the assessment period of the report has been updated from 2018-2025 to 2020-2027. Cordially fill Sample form for the updated data and TOC 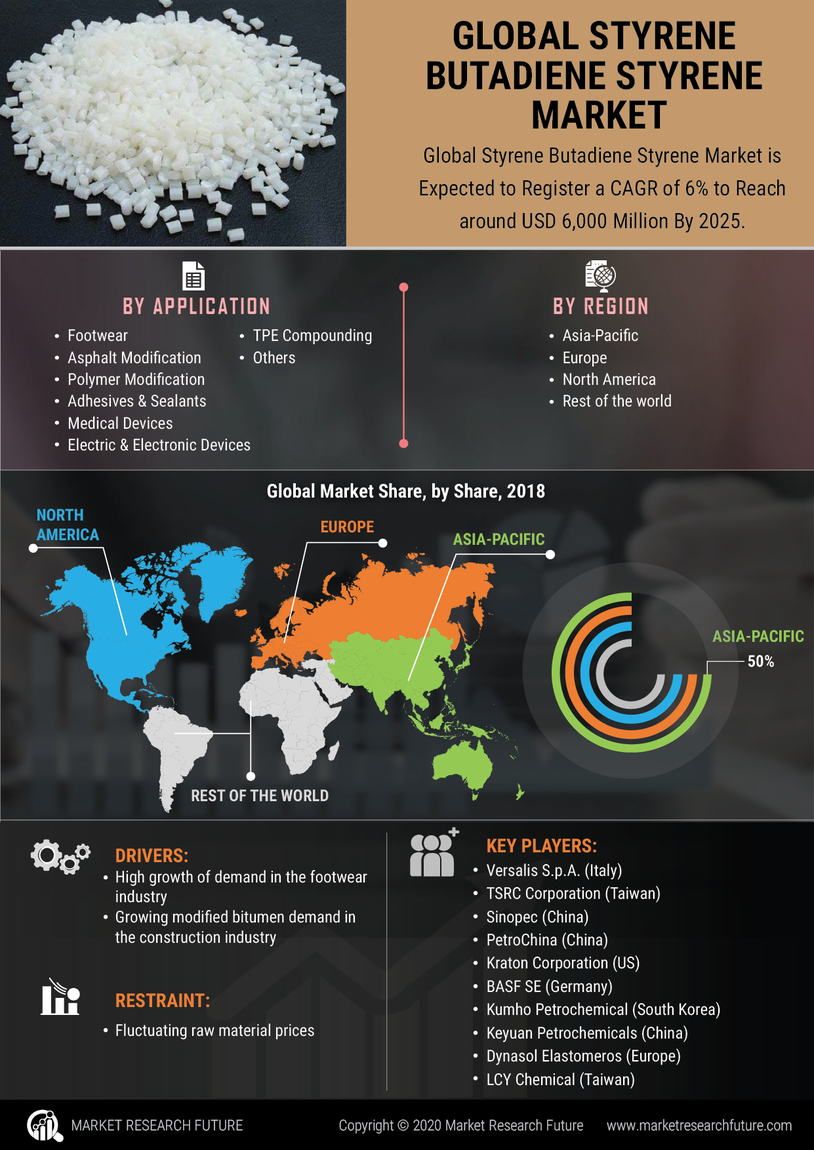 Global Styrene Butadiene Styrene Market is Expected to Register a CAGR of 6% to Reach around USD 6,000 Million By 2025. Styrene Butadiene Styrene (SBS) is a thermoplastic elastomer of styrene and butadiene. It is a type of block copolymer with a long chain of polystyrene and a middle chain of polybutadiene. SBS copolymers have properties of both polymers and rubber. In SBS, polystyrene gives strength and durability, whereas polybutadiene provides flexibility. The growth of the global market is mainly attributed to the increasing demand for SBS in a wide range of applications such as soles of shoes, asphalt modifications, adhesives, and electric & electronic devices, amongst others. Further, the ongoing global crisis due to the corona outbreak has had a huge impact on the global market as the virus has created a pandemic situation leading to the shutting down of production plants and end-use markets globally, thereby affecting the sales and trade of SBS products.

The Global Styrene Butadiene Styrene Market is projected to witness healthy growth, registering a CAGR of 6% during the forecast period, 2019–2025. The prominent factor driving the growth of the global market is the widespread usage of SBS in the manufacturing of shoe soles, heels, slippers, etc. in footwear. The growing demand for athletic and casual shoes is one of the key factors driving the growth of the global market. Furthermore, the rising usage of SBS as a bitumen modifier has further propelled the growth of the market. The increasing construction activities in emerging economies such as India, China, Indonesia, and Thailand due to rising residential construction, coupled with the population growth and increasing per capita disposable income, are expected to boost the demand for SBS. However, as SBS is manufactured from butadiene, which is one of the co-products in the manufacture of ethylene by steam cracking. Thus, fluctuations in raw material prices affect and hamper the growth of the market. Moreover, with the increased focus on research & development activities, manufacturers have developed new areas of application in diverse industries such as adhesives & sealants, medical devices, and tire treads in the automotive industry. 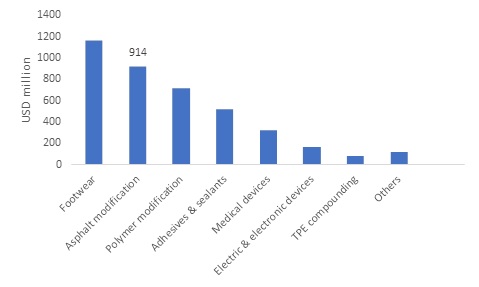 The Global Styrene Butadiene Styrene Market has been Segmented by Application and Region.

Based on Application, the global market has been segmented into footwear, asphalt modification, polymer modification, adhesives & sealants, medical devices, electric & electronic devices, TPE compounding, and others. The footwear segment accounted for the largest market share of around 30% in 2018 due to the huge consumption of SBS in the manufacturing of shoe soles and the growing demand for lightweight and functional shoes globally. The footwear segment is also expected to be the fastest-growing segment and was valued at around USD 1,100 million in 2018; it is expected to register a CAGR of around 6.5% to reach over USD 1,800 million by the end of 2025. 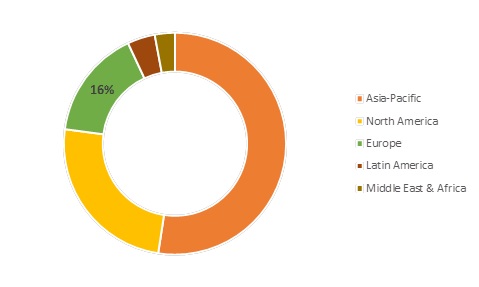 The global SBS market has been divided based on region into Asia-Pacific, Europe, North America, and the rest of the world.

Asia-Pacific dominated the global SBS market with a share of over 50% in 2018 and is expected to maintain its dominance of the market during the forecast period. This growth is attributed to the rapid rise in urbanization and population, and the presence of a large number of producers, cheap labor and global manufacturers shifting operations to low-cost countries. In addition to this, China and India are some of the major producers and consumers of the footwear industry which boosts the growth of the market in the region. The regional market is expected to register a CAGR of over 6.5% and reach a value of around USD 3,200 million by 2025. China held the largest market share of around 65% in the Asia-Pacific market and is expected to reach a value of USD 2,100 million by the end of 2025.

North America held the second-largest market share of the global SBS market in 2018 due to the high consumption of SBS in the footwear and construction industries. The market in North America is expected to grow at a CAGR of around 6% during the forecast period. Considering the high investments in R&D activities and the presence of advanced technologies in the region.

The global SBS market is characterized by the presence of many global, regional, and local vendors. The market is highly competitive with all the players competing to gain maximum market share. The rapid expansion of production capacities and growing applications of SBS in diverse end-use industries such as footwear, construction, adhesives, and medical devices are the key factors that influence the global market growth. The vendors compete based on cost, product quality, availability, and reliability of the products. It is crucial for vendors to provide cost-effective and high-quality products to compete in the market.

The high competition has encouraged the players to expand capacity and launch new products in the market. The players operating in the global SBS market are adopting various strategies such as mergers & acquisitions and expansions to maintain their market position and increase geographic presence. Expansions were the most widely employed growth strategy amongst many market players to capture maximum market share.

styrene butadiene styrene market was valued at more than USD 3.5 billion in 2016.

Increasing adoption of styrene butadiene styrene in footwear production is the major driver for the market.

Leading players in the market include Versalis SpA, TSRC Corporation, and Sinopec, among others.

Growing Consumption Of Styrene Butadiene Styrene In The Footwear Industry Propels The Growth Of T...