Strontium Market Overview The Strontium Market is projected to register a CAGR of 5.50% during the forecast period 2021 to 2027. Strontium is a silvery-white soft metal. Celestine and strontianite are the two main ores from which it is mined. It comes in a variety of forms, including discs, granules, ingots, pellets, and powder. Strontium-88, strontium-86, strontium-87, and strontium-84 are the four isotopes found in nature. Strontium has roughly 16 radioactive isotopes that are created synthetically by nuclear processes. Due to its outstanding qualities such as gloss, contrast ratio, opacity, resistance to salt, fog, weather, and UV, better film coverage, easy dispersion, high pellet flow, and smooth surface, the worldwide strontium market is primarily driven by high demand from the paints & coatings industry. The global strontium market is being driven by the increasing use of paints and coatings in related end-use sectors such as aerospace, automotive, construction, and electronics. Furthermore, as a benign alternative to barium and lead, the use of strontium oxide and strontium carbonate as frits in ceramic glazes is propelling market expansion. It's also utilized as a glass modifier to improve glass's optical characteristics, hardness and strength, and light refraction intensity. Because it absorbs ultraviolet and x-ray radiation, strontium-based glass is an excellent choice for cathode ray tube faceplates. Because of its high dielectric constant, it can be employed in wireless devices and memory chips. It can also be utilized as a substrate material for semiconductors and piezoelectric devices. 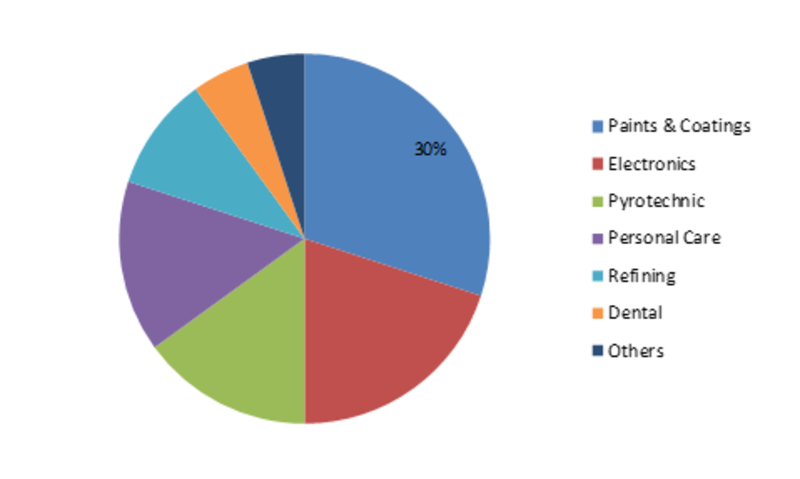 The global strontium market has been segmented into five regions, namely, Asia-Pacific, North America, Europe, Latin America, and the Middle East & Africa.The market in Asia-Pacific dominated the global strontium market in 2017 due to the high demand from packaging industry for paints & coatings, electronics, personal care, and others. The high growth of the market in this region can also be attributed to the fast-paced industrialization and urbanization in the emerging countries such as India, Thailand, Malaysia, and Singapore.

North America accounted for the second-largest market share in 2017 on account of the high demand for strontium from the aerospace, automotive, and electronics industries in the region. The developed militarily and army strength in the US is the major driver of the high product demand for military applications in this region.

The high production and sales of automotive parts in the Western European countries such as UK, Germany, France, and Italy are expected to fuel the demand for paints & coatings, which will further drive the demand for strontium.

The global strontium market has been segmented on the basis of product, application, and region.

By application, the market has been divided into electrical & electronics, paints & coatings, personal care, pyrotechnic, refining, dental care, and others.


Solvay agreed to sell its technical-grade barium and strontium operations in Germany, Spain, and Mexico, as well as its sodium percarbonate business in Germany, to Latour Capital on November 23, 2020. The barium and strontium division of Solvay is part of a joint venture with Chemical Products Corporation (CPC), which is part of the deal. Due to the employment of a new CEO in September 2020, Noah Chemicals becomes the premier customer-centric organization in the strontium market.

What can restrain strontium market growth?

Which region is slated to dominate the strontium market?

The Asia Pacific market has the scope to make sure of their dominance in the strontium market.

Name the industries that can increase the uptake of strontium and ensure a better growth rate of the strontium market.

Name the participants to ensure a better growth rate for the strontium market.

What strategies would place the strontium market in an advantageous position?

Strontium Market: increasing demand from major end-use industries across the globe is set to driv...