Space Technology Market Information By Subsystem (Orbit, Launch Platform, Launch Vehicle, and Payload), By End-Use (Civil, Commercial, and Military), and Region (North America, Europe, Asia-Pacific, and the Rest of the World)—Forecast till 2030 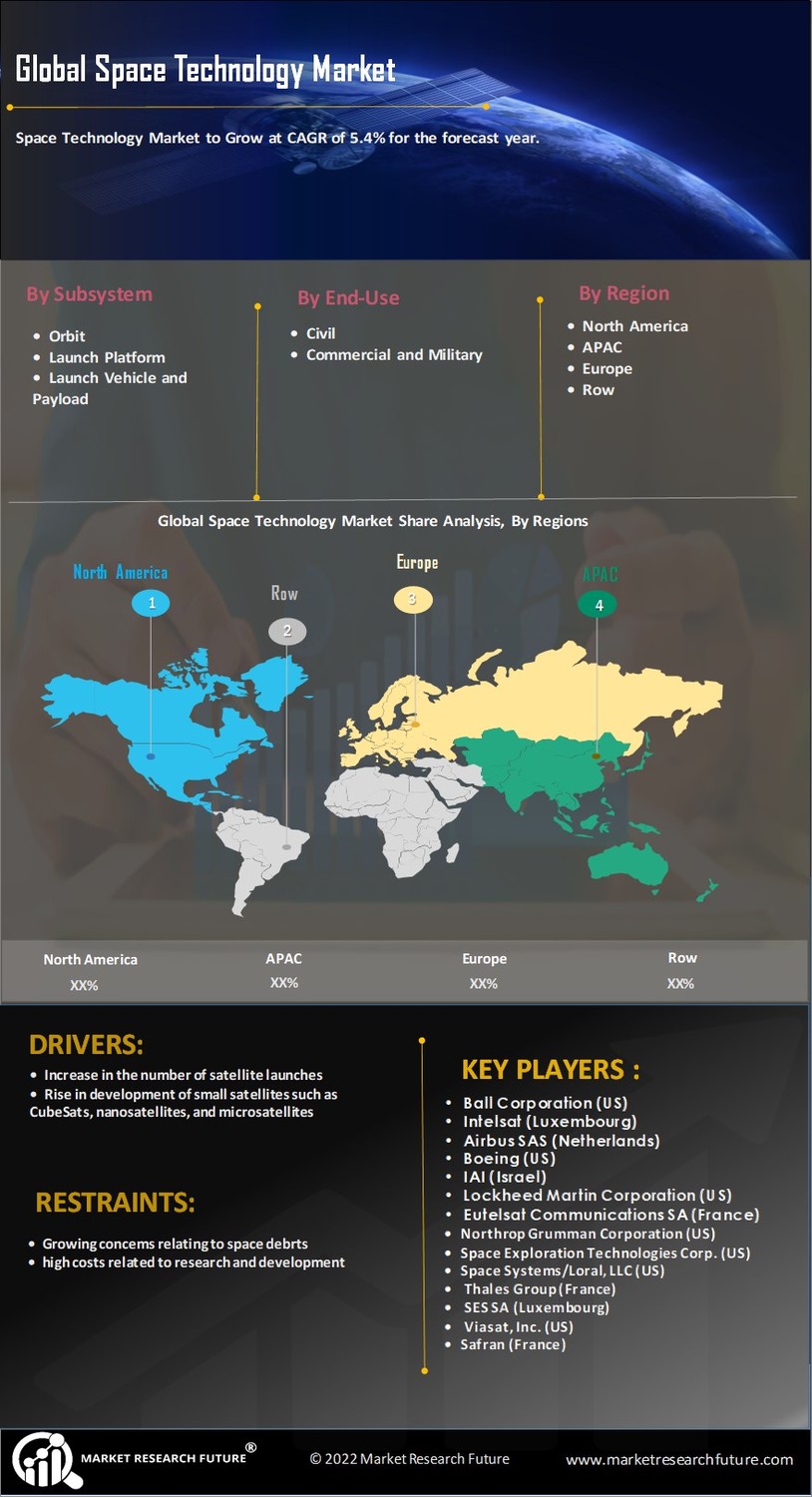 The  space technology market size is projected to register a CAGR of 6.70% from 2022 to 2030. The market's expansion is mostly attributable to advances in the production and deployment of satellites. Additional causes include the rising popularity of space farming and the creation of space hotels. Additionally, it is anticipated that the development of small satellites like microsatellites, nanosatellites, and CubeSats would accelerate the market's expansion in the upcoming years. Military forces' increasing demand for satellites has increased market growth over the assessment timeframe, which is likely to be a contributing factor. Furthermore, the massive investments made in the development of next-generation satellite systems by nations like the US, China, Russia, and the European Union, as well as the widespread procurement of such systems by nations like Saudi Arabia, India, Japan, and South Korea, are expected to drive demand for nano-satellites and reusable launch vehicle systems. The US is the domain's biggest spender, with China, the European Union, India, Russia, Japan, and South Korea expected to make up the majority of spending.

The number of partnerships between government and private space agencies, contracts, and sub-contracts - including procurement of various ancillary parts and small equipment, software development, and robotic devices - has increased recently. Private companies are also increasingly involved in the space exploration sector. Plans for the colonization of the moon and Mars, respectively, have been announced by businesses like Amazon and SpaceX. The ongoing pursuit of space tourism is anticipated to increase spacecraft production and manufacturing shortly, lowering the cost of space flights. All these factors are anticipated to drive the growth of the  space technology market over the forecast period.

The COVID-19 pandemic considerably impacted the space industry, particularly in the satellite launch, manned spacecraft, launch vehicle domains, and post-launch services sectors. The slowdown in major firms' operations has significantly impacted the market for new launches. Oxygen shipments for COVID patients also interfered with the planned launch of the Landsat 9 satellite, a joint project of NASA and the US Geological Survey. The Defense Advanced Research Project Agency's (DARPA) Blackjack mission, intended to test a new military communications network in Low-Earth Orbit, may not launch as planned in 2022 due to a shortage of microchips and other electrical components.

The development of space hotels and the rising popularity of space farming are two factors. Additionally, it is anticipated that the market will expand in the upcoming years due to the increased development of small satellites, including microsatellites, nanosatellites, and CubeSats. Military forces' increased demand for satellites has boosted the market's expansion, which is expected to continue throughout the assessment period. On the other side, it is projected that the market's expansion will be hampered by the strict government regulations governing satellite production, high costs associated with R&D, and growing worries over space debris.


Major nations have controlled the  reusable launch vehicle business by showcasing their space capabilities, and space exploration missions have drawn much interest. Additionally, the  market for spacecraft has grown due to R&D investments and expanding space. The  market for space missions is also expanding, stoking demand for reusable launch vehicles. Growing cooperation among international space institutions to integrate technology and investment is doing this. Government expenditures and the space budget may rise along with the number of space exploration missions.


Space debris includes both natural meteoroids and man-made (artificial) orbital junk. While most man-made debris revolves around the Earth, meteoroids circle the sun. Orbital garbage is any object created by humans in orbit around the Earth but no longer serving a useful purpose. Debris includes abandoned launch vehicle stages, broken spacecraft, mission-related rubbish, and fragmentation debris. About 23,000 bits of space debris are present. This debris, which orbits the Earth and is bigger than a softball, can move at high to 17,500 mph. The speed is high enough to cause harm to a satellite or spacecraft from an orbital debris particle that is relatively modest in size.


Leading Industry players typically use agreements, alliances, and joint ventures as their primary competitive tools in this market. For instance, SpaceX recently received a contract to use the Falcon 9 launch rocket to launch two satellites for Kazakhstan as part of a larger contract. Additionally, Lockheed Martin Corp. and The Boeing Company formed a joint venture to create United Launch Services, LLC. The actions of key companies increase the market share for space launch services ly to unprecedented heights. NASA, for instance, shortlisted 12 businesses in January 2022 for the Venture-Class Acquisition of Dedicated and Rideshare (VADR) missions.

The  space technology market segmentation, based on end-use, is civil, commercial, and military. The commercial segment, which predominated the market in 2021, is anticipated to grow at the fastest rate throughout the forecast period due to an increase in the number of satellites being launched by businesses worldwide. For instance, SpaceX launched 60 Starlink satellites in May 2019 to provide  high-speed Internet connectivity. Also anticipated to fuel the segment's expansion is the expanding idea of space travel. 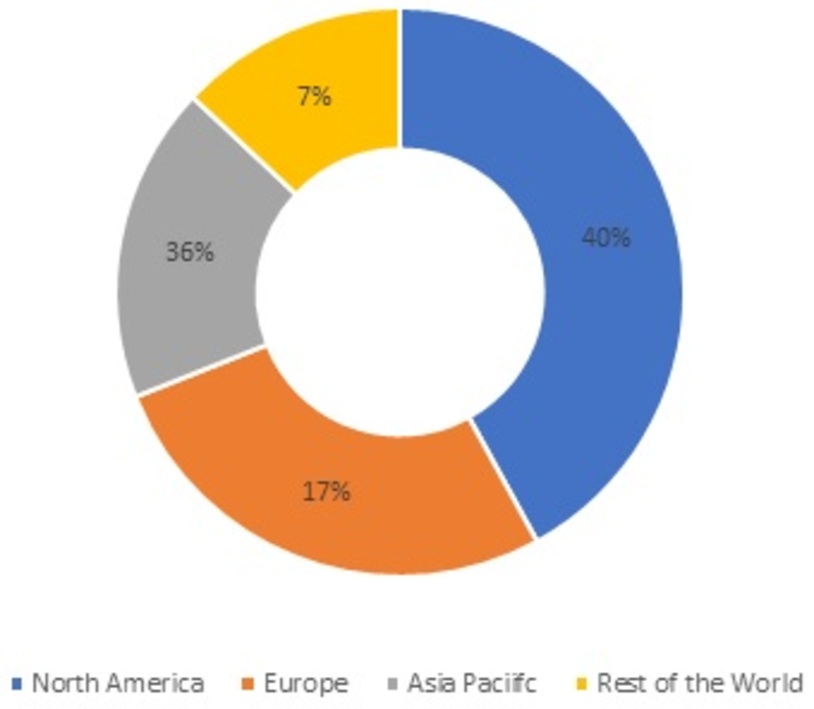 By region, the  space technology market has been divided into North America, Europe, Asia-Pacific, and the Rest of the World. North America accounted for the most extensive market share. Asia-Pacific will exhibit the highest CAGR during the forecast period.

In 2021, North America held a lion's market share with a USD 4.84 billion valuation. The government's funding allocation for space exploration operations and an increase in the number of different space missions are the causes of the expansion. Additionally, NASA will get USD 23 million from the US Congress for various space missions and operations for the fiscal year 2021. The market is also growing due to major industry players like United Launch Alliance, Blue Origin, Lockheed Martin, and SpaceX.

A significant increase is projected in Asia-Pacific during the projection period. The expansion can be attributed to the region's growing need for space launches for satellite communications, telecommunications, and surveillance systems. The major market participants in the Asia-Pacific region, including China, India, and Japan, held most of the market shares.

In December 2020, A contract for two further second-generation cosmo-skymed satellites was inked by Telespazio and Thales Alenia Space. The two new Thales Alenia Space-built satellites would guarantee the completion of the SAR (Synthetic Aperture Radar) surveillance service constellation and its full operational capability.

In September 2019, To launch a new era in British commercial space exploration, Spacebit, a U.K.-based firm, struck an agreement with Astrobotic to start scientific and commercial lunar exploration with its first mission in 2021 aboard the Peregrine lunar lander.

To identify and infer the drivers, restraints, opportunities, and challenges in the  space technology market growth

To provide a detailed insight into the major companies operating in the market. The profiling will include the company's financial health in the past 2-3 years with segmental and regional revenue breakup, product offering, recent developments, SWOT analysis, and key strategies.

What is the estimated growth rate of the Global Space Technology Market?

Global Space Technology Market is projected to register a moderate 6.7% CAGR in the forecast period.

What is the study period of the space technology market report?

The market is expected to register a CAGR of ~6.70% over the next 10 years, according to  space technology market research.

What is the expected space technology market size by 2030?

Who are the key players in the Market?