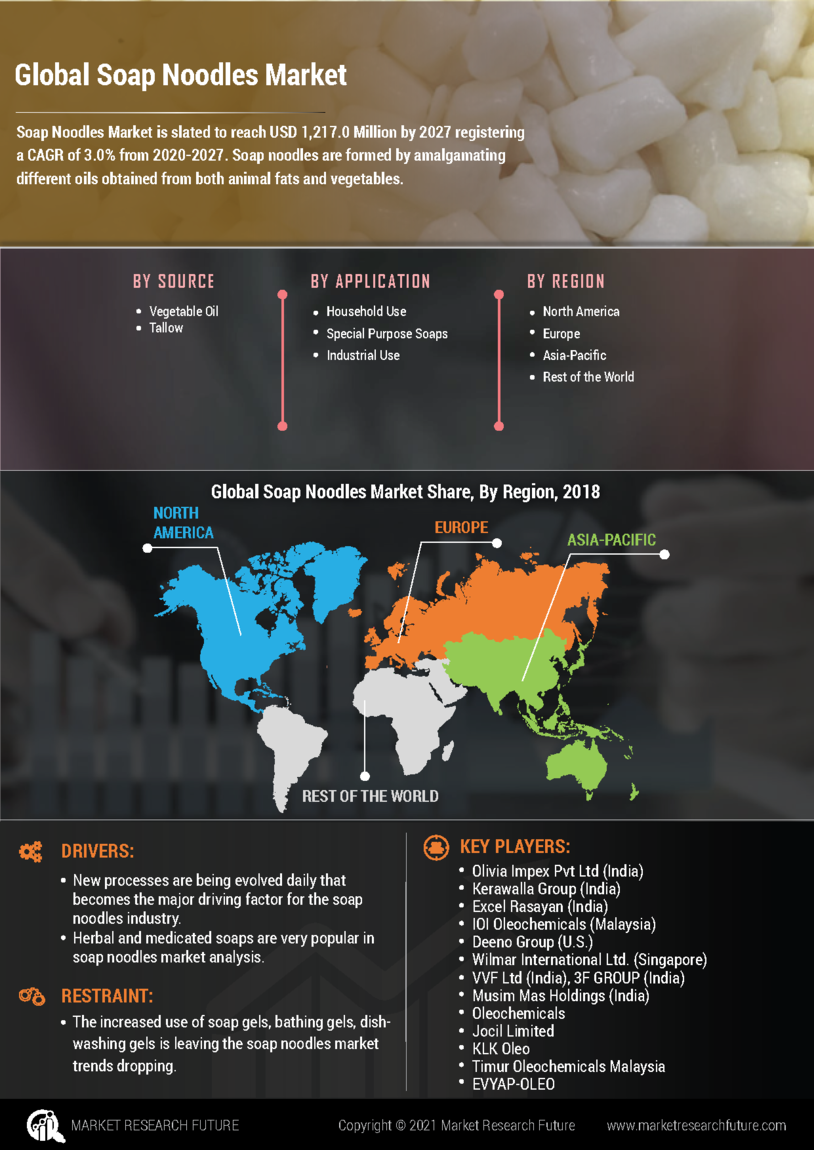 Soap Noodles Market is slated to reach USD 1,217.0 Million by 2027 registering a CAGR of 3.0% from 2020-2027. Soap noodles are formed by amalgamating different oils obtained from both animal fats and vegetables. They are sodium salts of fatty compounds and are formed by the technique of saponification. Soap noodles’ chemical composition includes the mixing of palm oil and coconut oil in the ratio of 80:20. Other blending ratios can be 70:30, 60:40, or 90:10. The soap noodles manufacturing process begins with the saponification of fatty or oil compounds. It then forms a non-combative mixture of fatty acids that are further processed with fatty methyl esters. A good soap noodle forms the right amount of lather, does not erode easily, is less harsh, and has good cleaning properties.


The above-listed companies come together in joint ventures, mergers and, acquisitions to launch new devices and products. Their main objective is to deliver cost-effective goods, adds quality to the standard of living of the people, and have effective cleaning results. With advanced technologies, the key players are focusing on developing specialized soap noodles to meet the specific needs of their consumers.

People across the globe are suffering from the covid19. It has adversely affected the functioning of all the industries, except for the pharmaceutical industry. Soap industry statistics reveal that the business houses were halted owing to the complete lockdown situation across the globe. The manufacturing was stopped for a certain period. Although, it was observed that there was a sudden increase in demand for cleaning soaps and detergents.

Washing of hands and other goods that were brought home from outside was washed off more often than usual. It increased in demand for medicated soaps. It, thus, increased the soap noodles market share.

Every nation has its major key players owing to the increasing demand for soap noodles. The plentiful availability of palm and kernel oil acts as an opportunity for soap noodles manufacturers. By using different ratios of combinations new toilet soaps, cleaning soaps, as well as, bathing soaps are being manufactured by the companies. 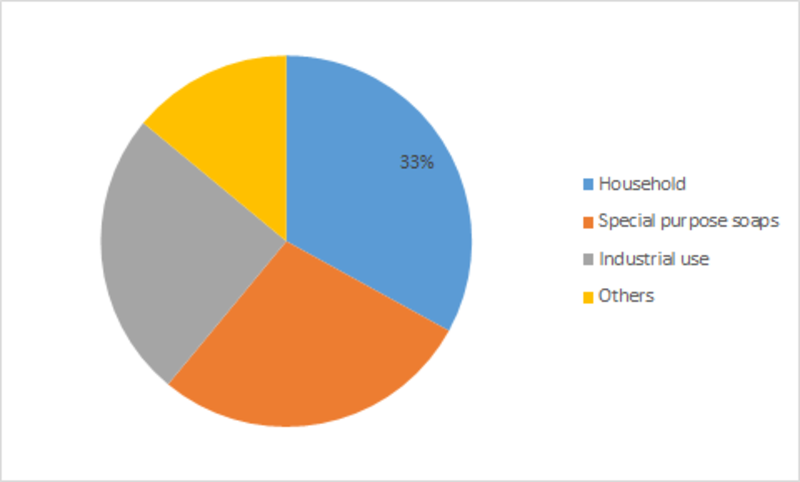 The global soap noodles market can be divided into various segments. These are: based on source, based on processes, and based on application.

Vegetable oil and Tallow are the two major raw materials used in the production of soap noodles. Palm oil, palm kernel oil, and coconut oil are the primary sources used in Southeast Asia. It has dominated the market until the year 2018. Production from tallow or animal fat is currently being used by China and Japan. Tallow is present at a cheaper rate than palm oils.

Soap noodle market analysis shows that several kinds of soaps are being produced to meet the demand of the consumers. The consumers vary from the local household to a large-scale chemical industry. Some of the end products manufactured by soap noodles manufacturer are as follows: Personal hygiene soap, household use soaps, Laundry and cleaning soap, Multi-purpose soap, Industrial soaps, and others.

Soap noodles market size is increasing with every passing day. It is leaving its impression in every corner of the world. The regions where they are operating include America, Europe, Asia-pacific, and the rest of the world.

Asia-Pacific region, which includes China, Japan, India, Australia, and South Korea, is a huge market for the production of soap noodles. It owns to the fact that soap noodles are consumed largely in every household of this region. These are also manufactured for industrial use as well as for producing special-purpose aromatherapy soaps. The process of production used is eco-friendly and is done with the help of less hazardous products.  Soap noodles market share in India is very large. Malaysia and Indonesia are the biggest manufacturers in this region.

America, which includes the area of North America (the US and Canada) and Latin America, is growing its market share of the soap noodles industry. This is because of the increase in industries and industrial requirements for soap noodles. It is expected to grow double folds throughout the forecasted period.

The European region which includes Germany, UK, France, Russia, and Italy, is rapidly increasing because of the rise in the standard of living of people. Adapting to healthy and clean living has propelled the soap noodles market.

The rest of the world, which includes regions of the Middle East and Africa, is showing constant but slow growth. It will grow because of the demand for herbal and scented products, moisturizing soaps, and others.

Soap noodles are formed by amalgamating different oils obtained from both animal fats and vegetables. They are sodium salts of fatty compounds and are formed by the technique of saponification. The plentiful availability of palm and kernel oil acts as an opportunity for soap noodles manufacturers. The most commonly used method for manufacturing soap noodles is Saponification Route and Fatty Acid Route. The key players are trying to procure and manufacture palm oil at lower prices so that the ultimate price of production of soap noodles can be lowered.

What are soap noodles?

Soap noodles are a feedstock for soap production, produced by the saponification reaction from vegetable oils and animal fat. They are formed as a salt of the fatty acids.

What are the advantages of soap noodles?

What are the major applications for the soap noodles market?

The leading application segments of the soap noodles market include household, special purpose soaps, industrial use, and others. The household segment holds the leading share in the market.

What is the major driver for the soap noodles market?

The growing demand for special purpose soaps such as herbal soaps and aromatherapy soaps is likely to be the major driver for the global soap noodles market over the forecast period.

What are the major players in the soap noodles market?