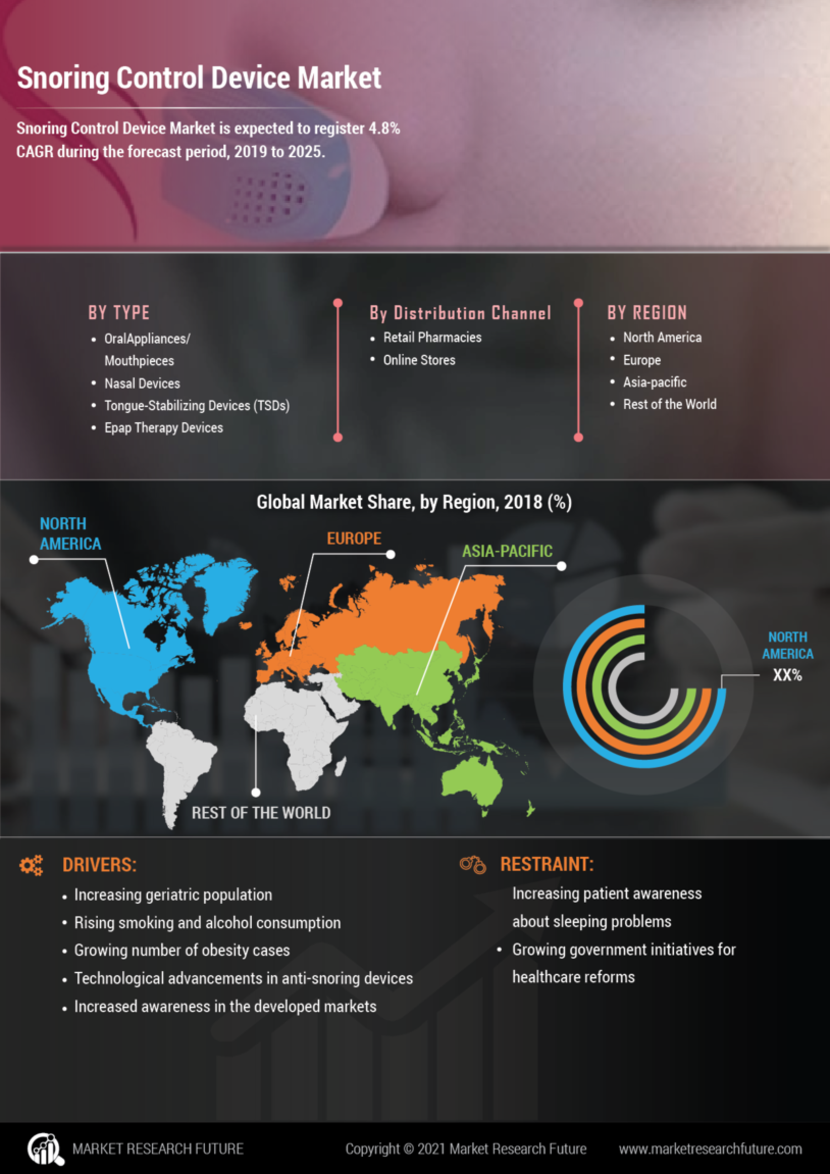 Snoring Control Device Market is expected to register 4.8% CAGR during the forecast period, 2019 to 2025.

Increasing geriatric population, rising smoking and alcohol consumption, growing number of obesity cases, technological advancements in anti-snoring devices, and increased awareness in the developed markets are the key factors propelling the growth of the market. An increase in weight is a major contributor to the problem of snoring, especially in the elderly population. According to the National Sleep Foundation, in 2017, 37 million individuals faced snoring problems on a regular basis. The World Health Organization (WHO) estimated that in 2016, more than 1.9 billion adults were overweight and over 650 million were in the obese category. Among children, more than 40 million below the age of five were overweight or obese.

The Snoring Control Device Market has been segmented based on Type, Distribution Channel, and Region.

The global market, based on type, has been segmented into oral appliances/mouthpieces, nasal devices, tongue-stabilizing devices (TSDs), Epap therapy devices, position control devices and chin straps. The oral appliances/mouthpieces are further segmented into mandibular advancement devices (MADS) and tongue-retaining devices (TRDS). The mandibular advancement devices (MADS) is further segmented down to non-custom MADS and custom-made MADS. The Epap therapy devices is segmented into 3-unit bridges, 4-unit bridges, Maryland bridges, cantilever bridges, dentures, and abutments. Based on the distribution channel, the market has been further divided into retail pharmacies, online stores.

The market has been divided, by region, into Asia-Pacific, the Americas, Europe, and the Middle East & Africa. The snoring control device market in the Americas has further been branched into North America and Latin America, with the North American market divided into the US and Canada. The European snoring control device market has been subdivided into Western Europe and Eastern Europe. Western Europe has further been classified into Germany, France, the UK, Italy, Spain, and the rest of Western Europe. The snoring control device market in Asia-Pacific has been segmented into Japan, China, India, South Korea, Australia, and the rest of Asia-Pacific. The market in the Middle East & Africa has been divided into the Middle East and Africa. 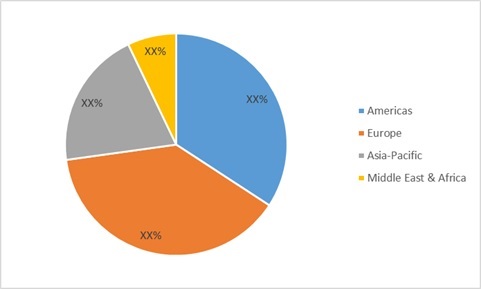 The market in the Americas is expected to dominate the global snoring control device market due to the increasing prevalence of obesity cases and increasing per capita healthcare expenditure in the region. Other factors such as existence of major industry players, rising number of baby boomers in the country is driving the snoring controlling devices market in the U.S. Technological advancements in the snoring treatment along with increasing investment in research and development to familiarize superior products in the market is further propelling the demand for treatment for snoring cessation in the country.

The market in Europe showed a considerable amount of growth. This can be attributed to the presence of a well-established healthcare system and increasing initiatives by government bodies for the development of new treatment options and is estimated to provide the market with high growth potential.

The market in Asia-Pacific is projected to register a steady growth rate during the forecast period owing to the increasing patient awareness about sleeping problems and growing government initiatives for healthcare reforms.  According to WHO, nearly 100,000,000 are likely to suffer from snoring problems hugely found in the age group of 55–60 years.

The market in the Middle East & Africa is projected to account for the least share of the market due to the low per capita disposable income in the region.

At what CAGR is the global snoring control device market projected to grow in the forecast period (2016-2022)?

How much is the global snoring control device market worth in the future?

The valuation of the global snoring control device market is estimated to increase to USD 1,456 MN by the end of 2022.

Which are the largest segments in the global snoring control device market?

The nasal device segment by types and the laser turbinectomy segment by treatment hold the larger shares in the global snoring control device market.

Which region holds the largest share in the global snoring control device market?

Who are the top players in the global snoring control device market?