Small Arms Market: Information by Type (Handguns, Shotguns, Machine Guns, and Rifles & Others), by Operation (Manually-Operated Firearm and Self-Loading Firearm), by Barrel (Rifled-Bore and Smooth-Bore), by End-User & by Region - Global Forecast till 2030 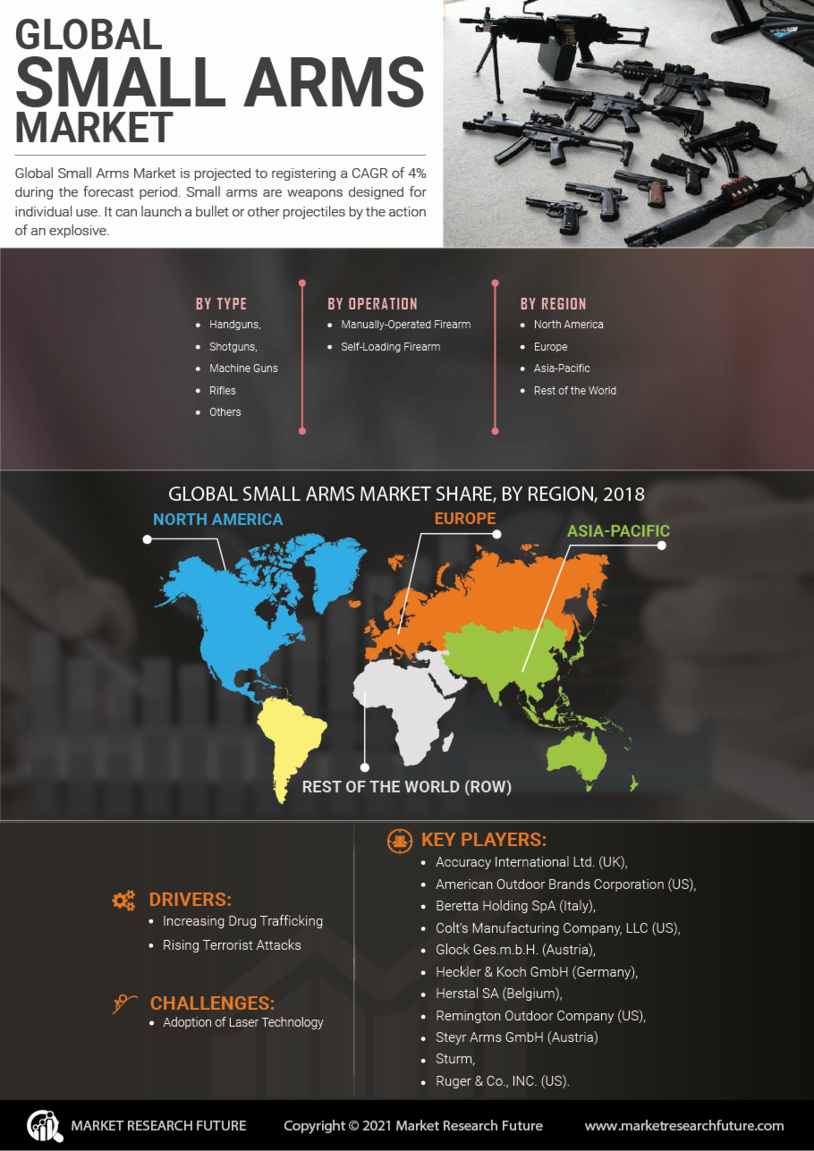 The business chiefs and industry experts predict that the global small arms market has been projected to have reached a global revenue figure worth USD 9.6 billion by the end of the forecast period in 2030

The global market is witnessing the emergence of prominent market factors such as the changing nature of developing warfare, followed by the militarization of police forces, along with the increasing incidence of drug trafficking and propelling terrorist activities. Also, the global market is witnessing a rising degree of modernization of armed forces that are likely to emerge as the driving factors assisting the growth of the small arms market during the ongoing forecast period that will be ending in 2028.

The spread of the global coronavirus pandemic has introduced various kinds of changes and has also changed how agencies characterize and carry on their production and supply offerings. Most of the target and contributory sectors of the economy as a whole are reaching a backseat because of the rising degree of uncertainty that is triumphing in those outbreak instances. With the rising number of cases with each passing day and the diploma of severity taking a toll, the major need of the small arms market is to dedicate a higher cognizance to the development of healthcare infrastructure and further, catering to comparable desires of people.

The healthcare enterprise is likely to be witnessing the first-rate demand and the growing dependence of people is presenting them with a large-scale requirement to cater to. The imposition of temporary and permanence lockdowns has hampered the ability of the markets to enhance the product line and portfolios for the global audience to choose from during the pandemic year 2020.

As a result of the regulations imposed alongside the temporary and permanent lockdowns, the target audience is witnessing ongoing instructions, and hence, the usage of digital devices is growing. This is emerging as new trends of the town and the rise in incomes is resulting in-dwelling to an excellent degree of demand for the small arms market share. The global market investors are now understanding the prevalent need for the market to return and conduct operations and hence, the global governments are improving their funding by reducing the restrictions that have been imposed. Also, there is another important thing that the market players also are investing in inside the research and improvement departments for the enhancement of these devices and adding the functions.

For instance, the 6.8mm ammunition that has been manufactured by True Velocity, which is a leading arms and ammunition manufacturer based in the US, is likely to be developed in the form of a replacement of the conventional 5.56mm NATO rounds in some special operation units. The new caliber, as a part of the global market, is designed to be slightly heavier and further, has more velocity than 5.56mm NATO rounds. This is likely to enable troops to fire from a greater distance and with more sharpness and accuracy.

Economic, legal, and political frameworks that differ from country to country are resulting in varying regulations regarding arms, ammunition, and others like warfare equipment. This is one of the major factors that is affecting the indigenous and outside players in the small arms market during the forecast period. The global market players are expected to fully comply with the prevailing laws and regulations of their home countries along with those of the foreign governments since the compliance failures affect sales, revenues, and profit margins, as well. These may even move forward and invite administrative and criminal actions. The government regulations often impact the contracting and procurement processes of several participating countries.

The small arms market share has been rising because of the evident employment of technology that is likely to prove to be helpful in the market expansion and the portfolio that will push the market towards excellent growth during the forecast period that ends in 2028.

The small arms review shows the performance of the following market segments:

The small arms market has been segmented and is inclusive of the following:

The small arms market size has been segmented based on the caliber and includes the following:

The type segment of the small arms market includes:

The small arms market has been segmented based on the cutting type and includes the following:

The technology segment of the market includes:

The action segment of the global market includes the following:

The North American region showcases the highest demand potential for small arms. This is primarily due to the increased defense spending in countries in the US and Canadian region. Also, for the same, there has been a huge rise in incidences of gun violence, which are driving both, factors related to law enforcement as well as civilian segments to procure small arms for procedures like counter-terrorism as well as self-defense applications.

The prominent players of the small arms market size are as follows: