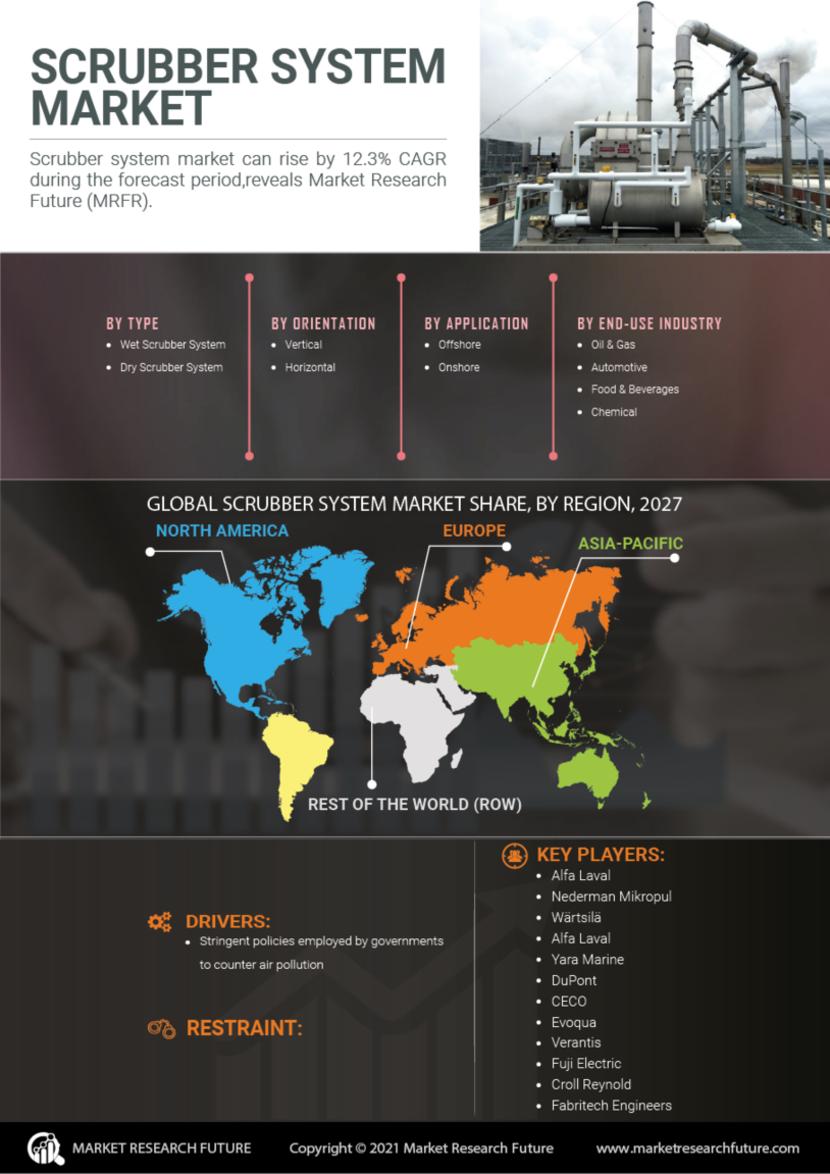 Scrubber system market can rise by 12.3% CAGR during the forecast period (2018-2023), reveals Market Research Future (MRFR). The report further shares a possibility for the scrubber system market to scale a valuation from USD 1.12 billion in 2017 to USD 1.7 billion by 2023.

Scrubber system can be regarded an important component in controlling air pollution. With concerns raised by authorities about ecological damage, maintaining a safe standard of pollution in industries has become of utmost importance. Hence, the spur in the scrubber system market as several industries are now integrating scrubber system in their manufacturing process. Scrubber systems protects the exhaust streams of factories and vessels against certain gases or particulates. In doing so, it reduces the level of pollutants in the air.

Scrubber system works by injecting liquid agent to wash unwanted pollutants from a gas stream or by using dry reagents to flush out acid gases. It can also be used in flue-gas condensation for heat recovery. Stringent policies employed by governments to counter air pollution can be a major factor for the scrubber system market growth during the forecast period. At the same time, maritime transport and seaborn trade are witnessing an uptick. The shipping industry has a strict regulation to adhere when it comes to gaseous emissions. This can also help in the ballooning of the scrubber service market.

On the flip side, norms regarding safety standards are quite strict and takes long time for approval which can dampen the scrubber system market prospect over the forecast period.

The Global Scrubber System Market can be segmented by type, orientation, application, and end-use industry.

By orientation, the scrubber system market includes vertical and horizontal. Horizontal segment is the current bellwether.

Based on application, the scrubber system market comprises onshore and offshore. Offshore segment is setting the trails for the market.

Based on end-user industries, the scrubber system market can be segmented into oil & gas, automotive, food & beverages, and chemical. Oil & gas is the leading segment.

Region-specific analysis of the scrubber system market encompasses North America, Europe, Asia Pacific, and Rest-of-the-World (RoW).
Europe is the fastest growing region in terms of revenue generating. The region has quite strict government policies regarding pollution which has forced a lot of industries in implementing scrubber systems in their production capacities. Ships are also following the process effectively.

North America’s impact in the market is also quite substantial. The region adheres global policies of maintaining ecological safe standards. The APAC region is also expected to show substantial growth. The drastic change can be expected from the increasing eco-awareness and education about environment protection. South Korea and China are lucrative markets that the market titans would love to explore.

By employing meticulous strategies, competent data analysts of Market Research Future collect information and study them extensively before predicting the future market size with a detailed listing of the relevant market segments. Interviews with prime decision makers of various trendsetting companies of the apposite market give the primary research much prominence. The secondary method includes a minute analysis of the present and the past trends to have a better grasp of the upcoming market scenario. To increase the precision of the obtained data, top-down & bottom-up approaches have been integrated into the system which gives a walk-through of the demand and supply equation. Furthermore, by adhering to credible resources such as annual reports, SEC filings, and white papers, our data analysts empower themselves with subtle comprehension of the germane product before proceeding to discuss market factors. The intent is to provide a holistic view of the sector by judging it against irreproachable parameters and enriching it with significant inputs.

In the future, what CAGR is forecasted for the scrubber system market?

A 12.3% CAGR is foreseen to be accomplished by the market.

How is the performance of market firms going to affect the scrubber system market revenues?

Who are the eminent firms functioning in the scrubber system market?

Verantis, Evoqua, Fuji Electric, Fabritech Engineers, and Croll Reynold are the contenders in the market.

What is the regional forecast for the scrubber system market?

The European region is expected to uplift the global market.

What are the factors inducing the growth in the scrubber system market?

The need to maintain a safe measure of pollution in industries is foreseen to benefit the market.

Scrubber System Market Can Set Its Eyes For Usd 1.7 Billion Valuation By 2027: Mrfr