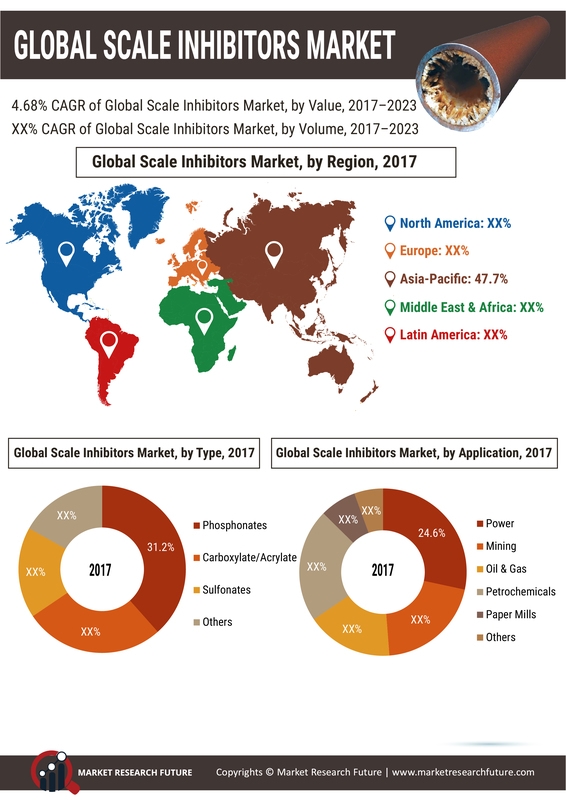 As per the Market Research Future Project, the scale inhibitors industry holds a scale inhibitors market value of USD 3286 million during the market forecast period by the end of 2030. It has also been marked that the scale inhibitors market holds a CAGR of 4.67% during the market forecast period of 2021-2030. Scale inhibitors are said to be the chemical materials that are used in the manufacturing industry for reduction or for checking the formation of scales. These scale inhibitors have been used in various industries for power generation plants, mining and construction, treatment of water and wastewater, oil and gas industry, food and beverage industry, and various environmental protection industries. The amount of scale precipitation depends on the temperature, pressure, amount of water congruity, and amount of mineral content in the water.

Scales are those precipitates that are formed on the surface of various types of machinery that continuously expose themselves to water. When the temperature increases this precipitation gets either fully or partially insoluble. The major end-user industry so marked till now is the oil and gas industry. The water so used in oil and gas industries is treated with these chemicals of scale inhibitors.

The outbreak of COVID led to the improvement of lockdown and shutdown. The subsequent lockdown and shutdown had a bad effect on the firms where the firms had to shut their manufacturing processes. The demand for the end-product deteriorated whereas disruption in the supply chain was marked. The government took several steps for the safety of the nationwide people amidst the rising cases of COVID. In the regions of Germany, the United States, Spain, Italy, and France, the rise in growth of scale inhibitor chemicals were dropped thus affecting the expansion of scale inhibitors market size. Due to the pandemic majority of the key players were trying to revive their operations by giving priority to the rising growth of supply chains while imposing certain measures for addressing the results of the COVID.

As per the rise in growth in the market, the suppliers and the distributors have involved themselves seriously in both research and developmental activities. The key players involved in raising the growth have adopted various competitive strategies like merging with other competitors, acquisitions, building partnerships with the next distributors thus helping to steer up the market growth globally. The market players holding a large-scale inhibitor market share play a substantial role where they are trying to propel up their customer base by creating joint ventures with some other contenders. Kemira Oyj is the leading manufacturer who holds an extensive area where it manufactures special products including the manufacturing of calcium sulfate, calcium carbonate, barium sulfate under some conditions. Some of the key players operating in the market are


By technologyBy the use of advanced technology people could develop some of the research methods where one could view the result through multidimensional analysis. The key players took the help of technology and utilized the novel detection protocol for analyzing and measuring the scale inhibitors.

The market of Asia Pacific covers a CAGR of 5.38% in the upcoming years which owes to the need for demand for effective water treatment for rivers and the growth in using the efforts taken by the government with this respect. A rise in awareness level about the treatment and increased migration to the urban areas across India and the Chinese region steers up the scale inhibitors market size during the assessment period. The Namami Gange Programme is the best project which uses scale inhibitors to cater the growth augmentation for portable water treatment. China is said to be an attractive market due to the rise in cruise oil production and occupies a scale inhibiting market value of USD 727.5 million by the end of 2023. The Japanese region is marked to be the second most bankable market region holding a record value of CAGR 4.56% in the following years.

August 2021: In around 70 vertical conventional wells in the Permian Basin, the application of an extended-release scale inhibitor demonstrated approximately three times the performance of the incumbent chemical. Tomson Technologies and Group 2 Technologies implemented a scale-squeeze programme for this carrier system in collaboration with Occidental Petroleum (Oxy). It enables the use of fewer squeeze treatments, resulting in reduced chemical usage, reduced plugging risk, and lowered environmental effect.April 2020 – H2O Innovation Inc. has released its latest Genmine range following years of extensive research and development. The range comprises scale inhibitors as well as cleaners developed for addressing issues related to the treatment of mine water. The new scale inhibitors can operate at both alkaline and acidic pH and restrict calcium sulfate and many common scales.June 2020 – Xiaomi has upgraded its Water Purifier C1, which now has new features including front Carbon rod coupled with a scale inhibitor, folding PP, a rear Carbon rod and reverse osmosis.

What is the contribution of the application segment towards the market?

The application segments comprise certain areas like petrochemicals, mining, oil and gas sectors, paper mills units, and many more. The power application units cover a growth of CAGR of 4.67% in the upcoming years where a huge amount is spent on the development. The power segment has marked that it owns a CAGR of 26.67% in the overall scale inhibitors market during the market forecast period. These power sectors and the units owe to the escalating requirement for the treatment of wastewater. The oil and gas units occupy the second-largest growth because the government is investing much more in deepwater as well as in ultra-deepwater exploration activities especially in the South China Sea along with an increase in the availability of oil reserves along with the regions of the Gulf of Mexico.

What notes about the North American market?

How does the progress in the Middle East and African region take place?