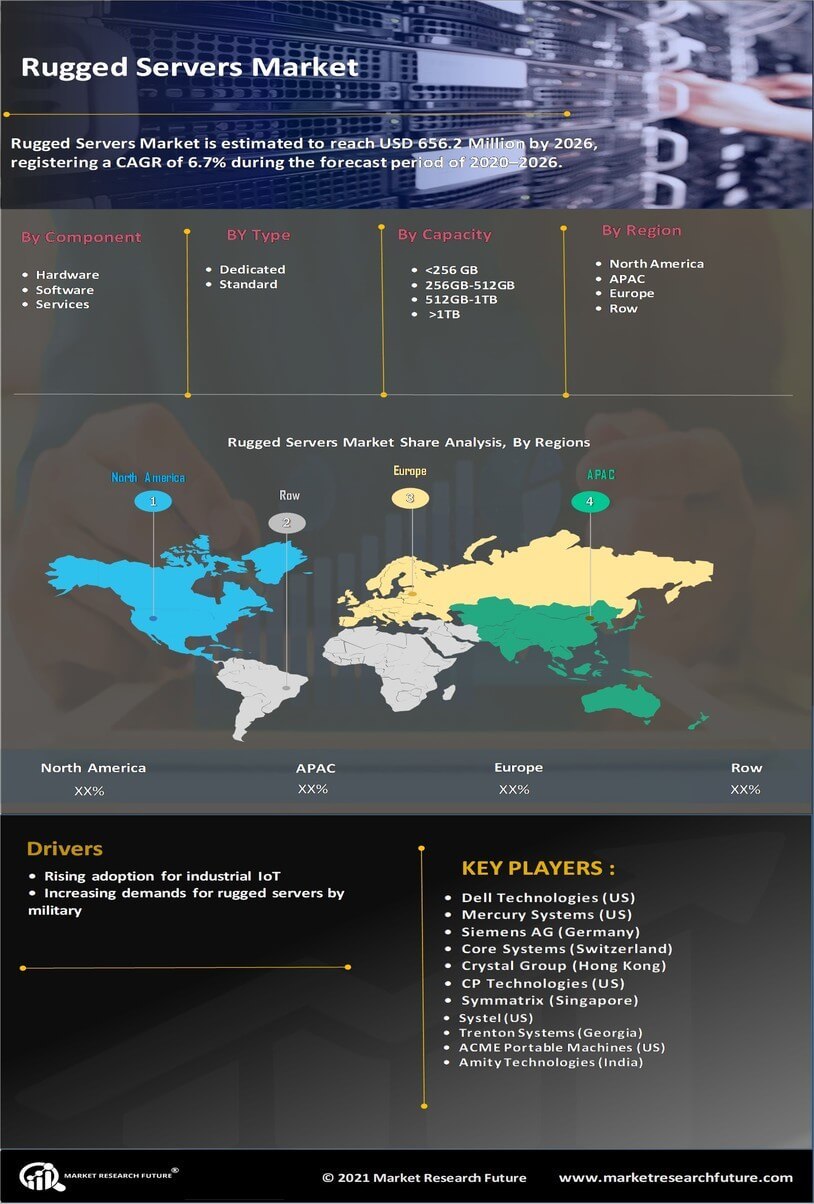 Globally, the size of rugged Servers Market is estimated to reach USD 656.2 Million by 2026, registering a CAGR of 6.7% during 2020–2026 driven by the rising use of industrial IoT and increasing demand for rugged servers by the military, industrial, and power sectors.

Robust servers are used by the military, industrial, and commercial specialists for high-performance computing and large-capacity data storage in a rugged, all-aluminium design that can resist some of the harshest terrains and applications. Rugged servers are primarily intended for usage in manufacturing and production environments, increasing the Rugged Servers Market Trends. This could be anything from a factory computer that assists with product separation on an assembly line to various medical, telecommunications, or aviation-related tasks.

The new coronavirus causes COVID-19, an infectious disease. COVID-19, which was largely unknown before its global outbreak, has gone from a regional catastrophe to a global epidemic in just a few weeks. COVID-19 has disrupted supply chains and hampered numerous industrial activities in practically every industry across the world. The majority of businesses have ceased or reduced their manufacturing operations to the absolute minimum. In the early stages of the pandemic, governments' COVID-19-responsive measures, such as lockdown and social isolation, resulted in the shutdown of manufacturing plants. The demand for numerous input items in the industrial sector has decreased dramatically as a result of the limited number of industrial operations permitted. The aforementioned considerations appear to be critical in influencing the Rugged Servers Market Share, as these industries are likely to employ far fewer new robust server systems during the current crisis.

The rising use of industrial IoT and increasing demand for rugged servers by the military, industrial, and power sectors are some of the factors influencing the Rugged Servers Market Growth throughout the forecast period. Due to a considerable movement in industrial industries towards digitization, the Rugged Servers Market has also gained traction during the Rugged Servers Market Forecast. Rugged servers are used in a variety of industries, including military, aerospace, marine, and power, to boost factory productivity and meet demanding product quality and safety criteria. These are well-suited for controlling processes in a variety of manufacturing industries, helping to balance product costs and quality while also ensuring regulatory compliance. There are certain processes in process industries, such as food and beverage and pharmaceuticals, must be operated at severe pressures or temperatures. Conventional servers, on the other hand, cannot perform successfully in manufacturing processes under such extreme temperatures, and working in these settings would be difficult for humans as well. As a result, some severe rules mandate the use of robust servers in such situations to safeguard the sectors' safety and security.

The upfront expenses of deploying these servers, as well as worries about data security at remote sites, may limit market expansion during the projection period. The safety and security of data are critical to any company's entire operation. Because rugged servers are utilized in severe conditions and are frequently deployed in remote areas, automatic security procedures are required to protect against theft, malfunction, accidents, and malicious assaults. Rugged servers, like any other system, are vulnerable to hacking and virus attacks, which result in the loss and misuse of sensitive data and hurt Rugged Servers Market Size and Rugged Servers Market Share by disturbing the whole security mechanism. As a result, rising data privacy and security concerns are projected to limit the market's growth and Rugged Servers Market Trends in the coming years.

Manufacturers all around the world are migrating away from traditional production techniques and toward digitalized manufacturing methods as the manufacturing landscape changes. Several manufacturing organizations are steadily boosting their R&D spending, adopting emerging information and communication technologies, and developing innovative goods to fulfill changing consumer demands in this respect. The use of enabling technologies in manufacturing is increasing, as is the adoption of industrial robots in the manufacturing sector, which is being fueled by the development of collaborative robots. The connected enterprise is also helping to drive digitization in the manufacturing and processing industries. Rugged servers are projected to play a key role in allowing efficient process control and monitoring, as well as effective data transfer, in the digitalized manufacturing scene. These servers are mostly used to transport data between devices in companies that operate in harsh conditions. As a result, demand for rugged servers is likely to rise in several end-user industries as the industry shifts toward digitalization.

North America led the global market, and this trend is likely to continue during the forecast period. Due to high-end improvements and research & development efforts, military & aerospace, telecommunications, and power—key end-users of rugged servers are well-established in North American countries, particularly the United States and Canada. Furthermore, during the forecast period, the growing demand for improved process flexibility and efficiency harmonized production processes for effective supply-chain management, and lowering maintenance and operation costs in discrete industries is expected to drive the adoption of rugged servers in industrial applications in the country. The area of Asia-Pacific, on the other hand, is predicted to develop at the fastest rate during the forecast period. The market in this region is likely to be fueled by rising demand for smart energy solutions, as well as an infusion of industrial IoT across the region.

The Rugged Servers Market is quite competitive, with a number of prominent companies. Several of these firms dominate the market in terms of market share. Due to the quick rate of development of server technologies and the presence of multiple businesses focused on R&D activities aimed at developing innovative solutions in the Rugged Servers Market, the market has become extremely competitive in recent years. These companies place a premium on innovation and, as a result, invest heavily in research and development to offer a cost-effective product portfolio. There have been recent mergers and acquisitions among the major players, a tactic used by businesses to expand their consumer base. The major key players in the Rugged Servers Market are as follows:

The research methodology utilized to estimate and predict the Rugged Servers Market, press releases, annual reports, and other secondary sources were collected and analyzed. When determining market segmentation, vendor offerings are taken into account. Based on the revenues of the largest firms, the full market size of the worldwide market was calculated using the bottom-up technique. Following the determination of the total market size, the market was divided into several categories, each of which was then validated by primary research.

How big is the global rugged servers market?

The rugged Servers Market is estimated to reach USD 656.2 Million, expected to register a CAGR of 6.7% by 2027

Who are the key manufacturers of the global rugged servers market?

What is the primary market driver?

The rugged servers market is estimated to be driven by increasing expansion of IoT and demand for rugged equipment by the military.

What can restrict the market growth?

Why will APAC can display a robust growth rate in the rugged servers market?

APAC can display a robust growth rate in the rugged servers market owing to use of networking equipment in rough terrains and demand for smart energy solutions.