Recombinant DNA Technology Market Information By Product (Medical and Non-Medical), By Component (Expression System and Cloning Vector), By Application (Food & Agriculture, and Health & Disease), By End User (Biotechnology Companies and Pharmaceuticals), and Region (North America, Europe, Asia-Pacific, and the Rest of the World)—Forecast till 2030 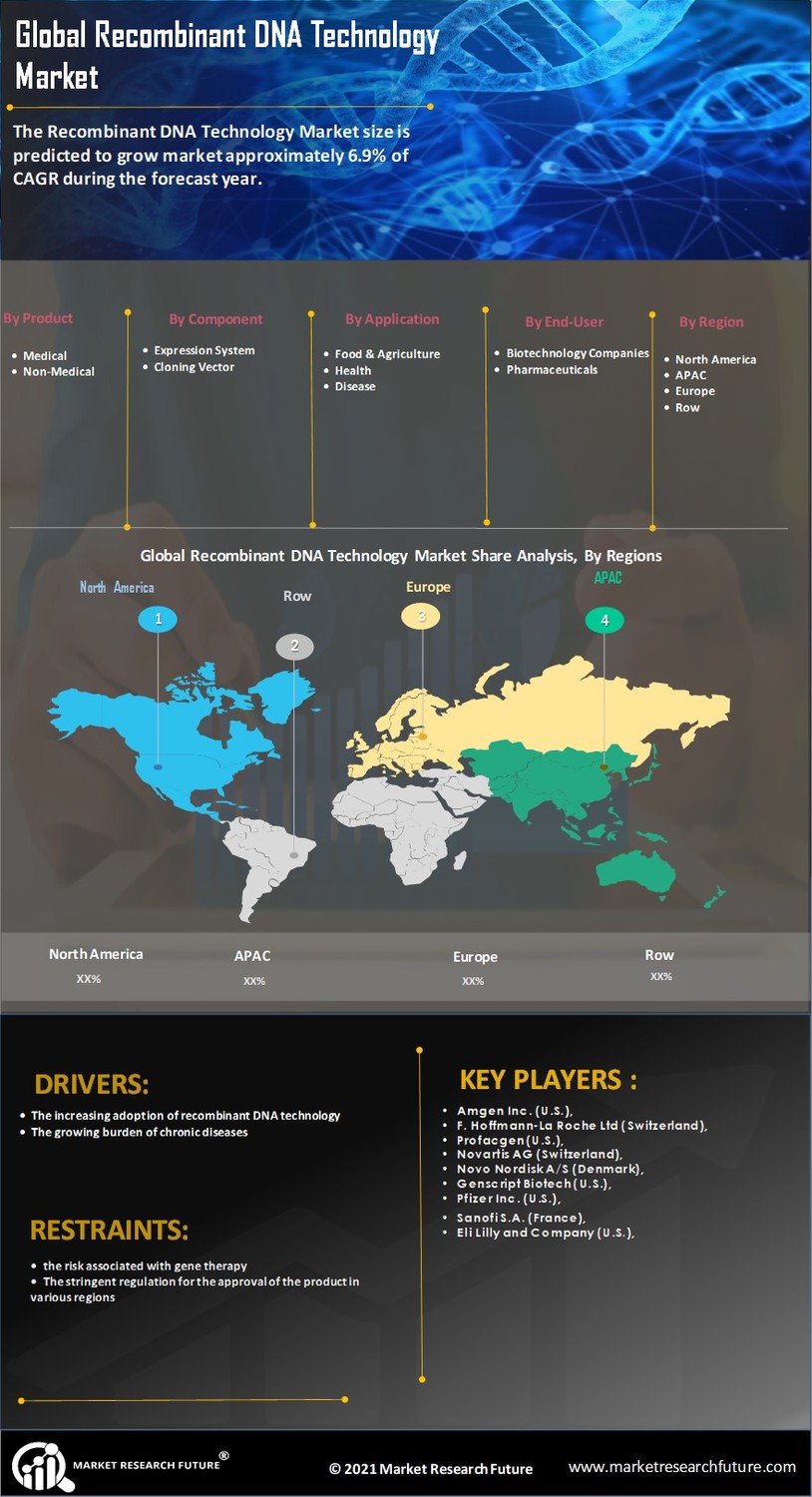 Recombinant DNA Technology Market is expected to grow at CAGR of 4.9% to reach USD 1.06 trillion during the forecasted period 2022-2030.

The Recombinant DNA Technology Market is expected to reach USD 1.06 trillion by 2030 at 4.9% CAGR during the forecast period 2022-2030. Scientists now have unprecedented control over genetic material thanks to recombinant DNA (rDNA) technology. This has increased its use in a wide range of traditional and unconventional applications. This field has made remarkable progress in the creation of recombinant medications and therapies without the use of human donors in recent years. ​The commercial success of genetically modified insulin for diabetes therapy is a typical example of this feat. The biotech and pharmaceutical industries are engaged in interpreting the potential of rDNA approaches in many parts of disease management. This is primarily to battle the rising burden of chronic diseases and to keep up with the growing demand for treatments. For instance, in February 2022, VBI Vaccines Inc. obtained good feedback from the European Medicines Agency's Committee for Medicinal Product Use. This opinion was connected to the 3-antigen hepatitis B (HBV) vaccine, PreHevbri, for establishing vaccination to protect against infection caused by the hepatitis B virus in adults. Hepatitis B remains a public health issue in Europe; consequently, this favorable opinion established a meaningful choice for health providers in safeguarding patients from the disease. ​

Remarkable advancements in the sector to treat life-threatening human disorders such as infectious diseases, diabetes, and cancer are some of the major drivers influencing market growth. Recombinant technology advancements have aided in the development of long-acting therapeutic proteins for medication development, the introduction of gene therapy, and the development of innovative molecular medicine. Positive impact on genetic disease treatment and growing innovations will likely drive market expansion during the forecast period. ​Leading biopharmaceutical businesses and research institutes strategically work with key manufacturers to create novel therapies based on recombinant DNA technology. Such collaborations are expected to drive worldwide market growth throughout the forecast period.


Increasing strategic collaborations by leading market players to advance recombinant DNA technology are projected to fuel market expansion over the forecast period. Major market participants collaborate strategically with major biopharmaceutical companies and research institutes to develop innovative therapies based on recombinant DNA technologies. Such market-wide strategic collaborations are projected to foster the expansion of the  market shortly. For instance, Sanofi Pasteur, the vaccines division of the French multinational pharmaceutical company Sanofi, acquired Protein Sciences Corporation, a biotech company based in Meriden, Connecticut, in August 2017 to add a promising product to its vaccine portfolio - Flublok (Influenza Vaccine), the only FDA-approved recombinant protein-based influenza vaccine.


The high expense of gene therapy and adverse effects such as Cytokine Release Syndrome (CRS) or Neurological Toxicities are inhibiting market expansion. Additionally, scientific, regulatory, and ethical constraints linked with gene therapy are projected to limit market expansion during the projection period.


Many additional businesses benefit from genetically modified organisms (GMO) research, such as microorganisms that are considered clean fuel generators and bio degraders. Genetically engineered vaccinations are produced to cure numerous diseases in humans and plants. By changing microbes, animals, and plants to provide medically valuable compounds, recombinant DNA technology has created various potential opportunities and prospects for generating a wide range of therapeutic items with immediate effects in medical genetics and biomedicine.

The market segment of recombinant DNA technology, by product, is medical and non-medical. The medical segment dominated the market in 2021, and this trend is expected to continue at the highest CAGR over the forecast period. rDNA technology has changed the medical industry and has an ever-increasing impact on clinical medicine. It has facilitated illness treatment by inserting fresh genes in place of damaged & sick genes. Growth in the medical segment is expected to be also driven by advances in genetic engineering and process development. The success of GM crops is driving the non-medical component of this business.

The market segment of recombinant DNA technology, by component, is expression system and cloning vector. The largest part was acquired by expression systems, owing to continuous improvements for efficient protein expression and large-scale protein isolation. Mammalian, bacterial, insect, and yeast expression systems are the most commonly employed. The creation of cell lines such as HEK293 and Chinese Hamster Ovarian (CHO) has contributed significantly to the mammalian expression system market share.

By application, the market is segmented into food & agriculture and health & disease. The health & disease application has accounted for the majority of the share in the recombinant DNA technology market growth in 2021. This high proportion can be attributable to a diverse variety of recombinant products for human illness treatment, including medicines, vaccines, and enzyme replacements. With the increasing burden of crop development and the resulting stress on farmers to satisfy customer expectations, this technology has steadily grown as a panacea for tackling these agriculture sector concerns. 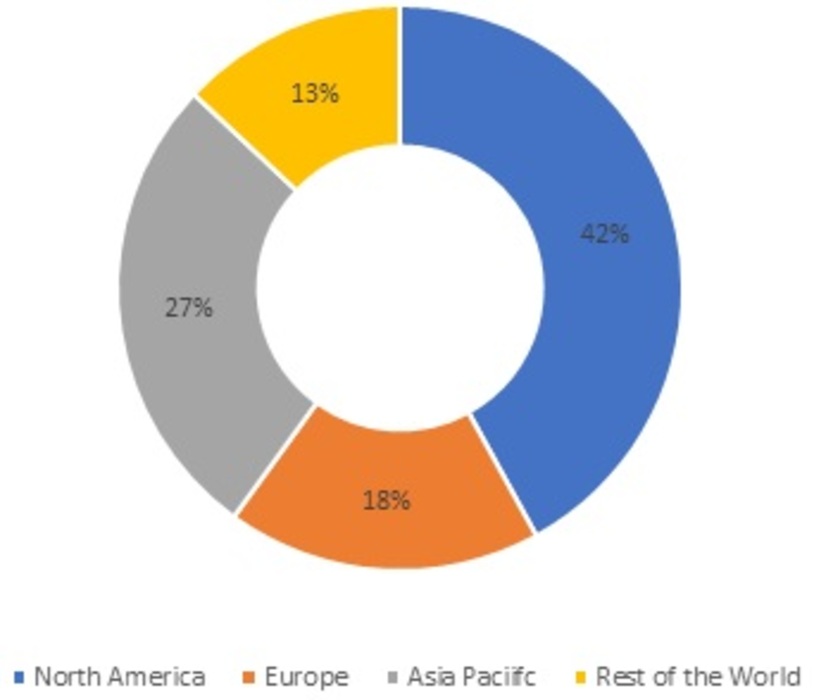 By Region, the  market of recombinant DNA technology has been divided into North America, Europe, Asia-Pacific, and the Rest of the World. North America accounted for the most extensive market share. Asia-Pacific will exhibit the highest CAGR during the forecast period.

In 2021, the North American region held the largest market share. The greatest proportion of the North American area can be attributable to the fact that the United States is home to many biopharmaceutical manufacturing participants. Furthermore, the availability of strong regulatory organizations to monitor the numerous ethical and scientific concerns associated with using technology has fueled regional progress.

The presence of low-cost manufacturing centers in Asian nations such as China has piqued the interest of multinational companies looking to relocate their operations to this region. Furthermore, Japan is one of the world's tops per capita importers of food and feed, developed with current biotechnology methods. Japan's GE agricultural regulating regime is becoming better. Furthermore, there are no significant trade barriers in Japan to impede the export of GE items from Western countries. As a result, Asia-Pacific is predicted to be the region's fastest-growing market in the forecast period.

The market includes tier-1, tier-2, and local players. The tier-1 and tier-2 players have  reach with diverse product portfolios. Companies such as Amgen Inc. (U.S.), F. Hoffmann-La Roche Ltd (Switzerland), Profacgen (U.S.), and Novartis AG (Switzerland) dominate the  market due to product differentiation, financial stability, strategic developments, and diversified regional presence. The players are concentrating on supporting research and development. Furthermore, they embrace strategic growth initiatives, such as development, product introduction, joint ventures, and partnerships, to strengthen their market position and capture an extensive customer base. For instance, VBI Vaccines Inc. approved PreHevbrio (Recombinant Hepatitis B Vaccine) in the United States in March 2022 to prevent infection caused by hepatitis B virus (HBV) in adults aged 18 and older. Furthermore, the release of the vaccine can potentially increase immunization rates with US health professionals' help while protecting adult patients against HBV.

To identify and infer the drivers, restraints, opportunities, and challenges in the  recombinant DNA technology market growth

What is the study period of the recombinant DNA technology market report?

What is the recombinant DNA technology Market Growth rate?

The market is expected to register a CAGR of ~4.9% over the next 10 years, according to the  recombinant DNA technology market research.

Who are the leading Recombinant DNA Technology Market players?

Leading players in the Recombinant DNA Technology Market include Novartis, Profacgen, and Amgen, among others.

Which Region has the highest market growth rate?

Which Region has the largest share of the market?

What is the expected recombinant DNA technology market size by 2027?