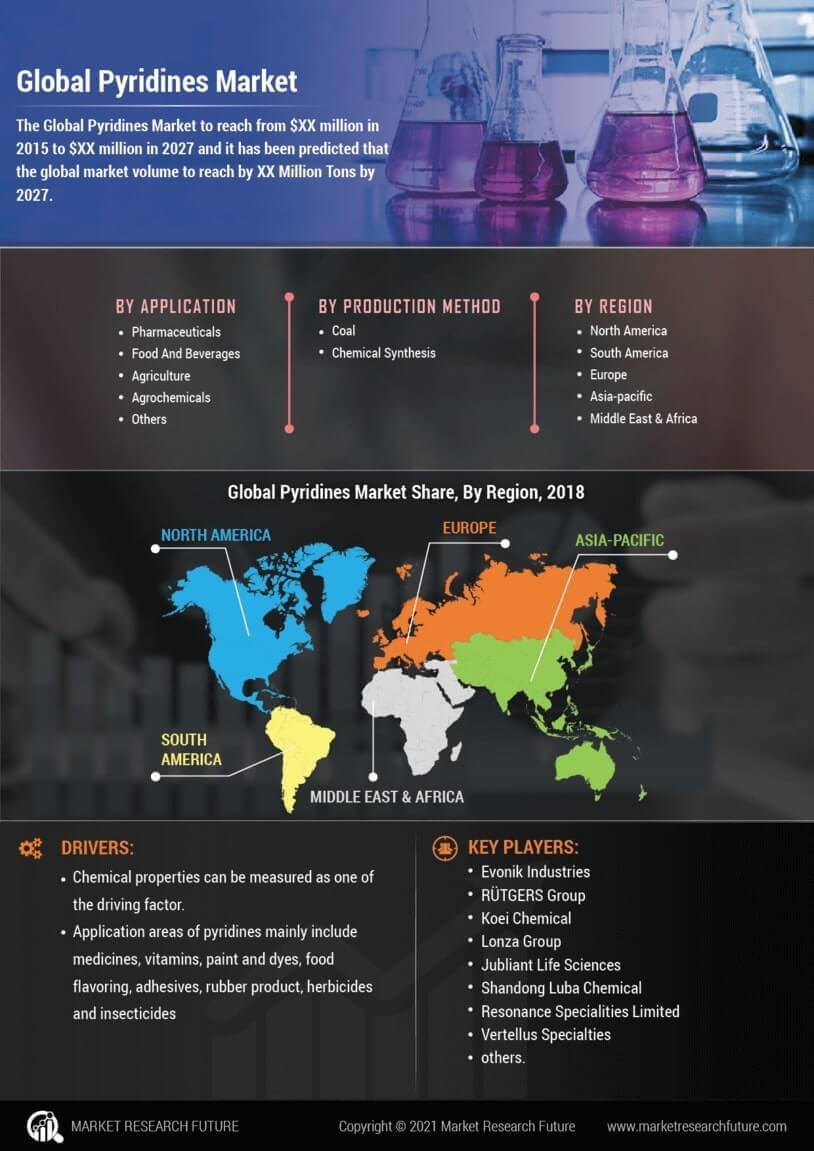 Pyridines Market Synopsis:
The global pyridines market has seen a potential growth over the past year and expecting huge growth during the forecast period. Pyridine is high flammable, colorless, water-soluble liquid which is usually made from crude coal tar and from different chemicals.

The primary use of pyridine is to dissolve the other substance. This chemical properties can be measured as one of the driving factor. The application areas of pyridines mainly include medicines, vitamins, paint and dyes, food flavoring, adhesives, rubber product, herbicides and insecticides. The growing demand of such application has increased the demand of pyridines across the globe.

Sep 2021 According to the Department of Science and Technology (DST), Indian scientists have created a cost-effective and thermally stable electronic polymer-based sensor for promptly detecting nitro-aromatic compounds used in high-energy explosives for the first time. To overcome these drawbacks, a group of scientists from the DST's Institute of Advanced Study in Science and Technology, developed a layer-by-layer (LBL) polymer detector made up of two organic polymers: copolysulfone of cholesteryl methacrylate with hexane (PCHMASH) and poly-2-vinyl pyridine with acrylonitrile (P2VP-Co-AN).

May 2021 Trinseo SA has announced an increase in the prices of all vinyl pyridine latex sold into the tyre cord market throughout Europe, the Middle East, and Africa. As per contractual agreements, the price increase will be Euro 500/wet tonne as of June 1st. The increase was required, according to Trinseo, to balance increased raw material costs. In May of last year, Trinseo purchased Synthomer's VP latex activities and began producing the goods at its Marl, Germany, facility.

The market report for Pyridines of Market Research Future comprises of extensive primary research along with the detailed analysis of qualitative as well as quantitative aspects by various industry experts, key opinion leaders to gain the deeper insight of the market and industry performance. The report gives the clear picture of current market scenario which includes historical and projected market size in terms of value and volume, technological advancement, macro economical and governing factors in the market. The report provides details information and strategies of the top key players in the industry. The report also gives a broad study of the different market segments and regions.

At what CAGR is the Pyridines Market predicted to grow during the forecast period?

Pyridines Market is predicted to grow at Significant through forecast period of 2022-2030.

What is the forecast period of Pyridines Market research report?

The forecast period for Pyridines Market research report is 2022-2030.

Which region will lead the global Pyridines Market?

Who are the key players in the Pyridines Market?

The prominent players operating in the Pyridines Market include

At what CAGR is the Pyridines Market predicted to grow during the forecast period?

Pyridines Market is predicted to grow at Significant through forecast period of 2022-2030.

What is the forecast period of Pyridines Market research report?

The forecast period for Pyridines Market research report is 2022-2030.