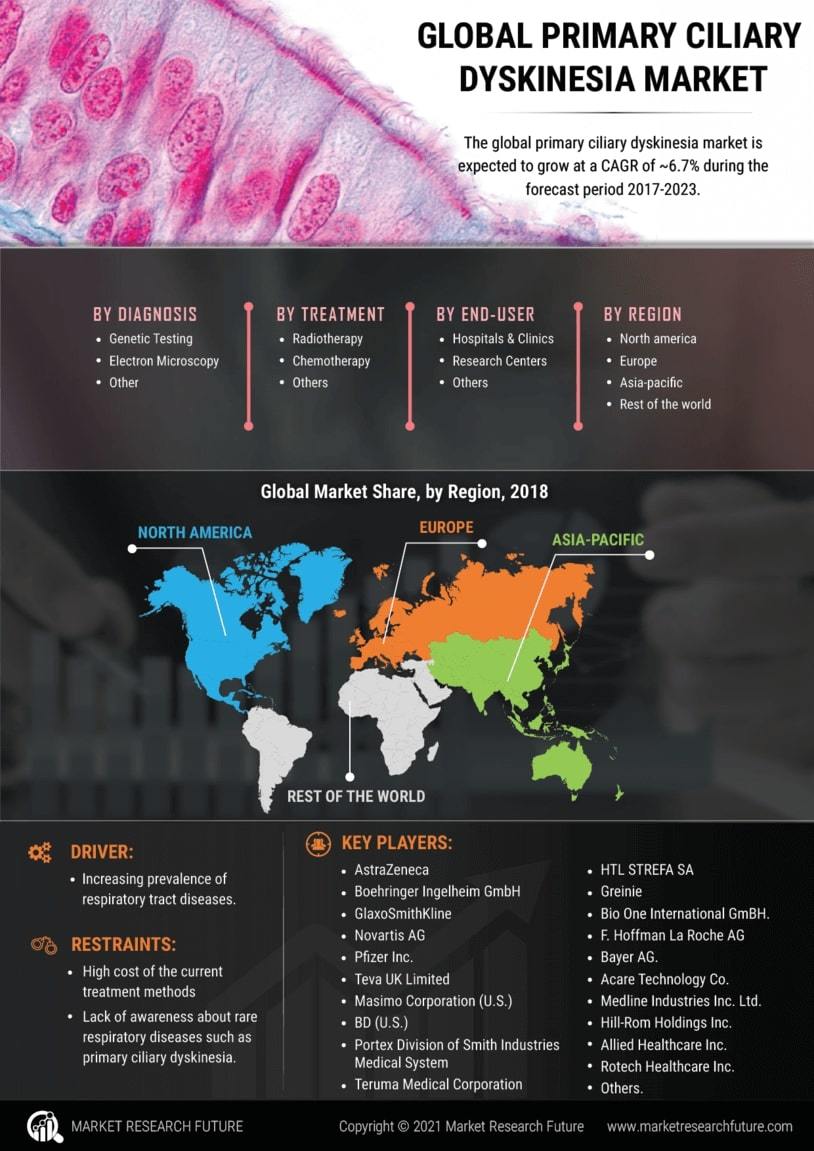 The Primary Ciliary Dyskinesia Market is expected to reach USD 528.5 Million by 2030 at 8.6% CAGR during the forecast period 2022-2030. Primary ciliary dyskinesia (PCD), also kown as immotile ciliary syndrome or Kartagener syndrome. Primary ciliary dyskinesia is a rare disorder and is a type of chronic respiratory tract infections, normally occurs in internal organs of human body. The major symptoms of this condition are caused by abnormal cilia and flagella. Normally cilia are microscopic, finger-like projections that stick out from the surface of cells. They are found in the linings of the airway, the reproductive system, and other organs and tissues. Flagella are tail-like structures, similar to cilia that propel sperm cells forward.

In some cases, mutations in the genes can cause primary ciliary dyskinesia result in defective cilia that move abnormally or are unable to move. As cilia have many important functions within the body, defects in these cell structures cause diseased condition

Increasing prevalence of respiratory tract diseases is one of the major factors for the growth of the primary ciliary dyskinesia market during the forecast period. According to the Centers for Disease Control and Prevention (2014), 9.3 million adults diagnosed with respiratory problems. Whereas, 147,101 deaths occurred due to chronic lower respiratory diseases.It is predicted to be the 3rd most death causing factor.

According to the World Health Organization (WHO), over 7 million deaths occur each year of which more than 6 million deaths result from direct use of tobacco. Moreover, According to Eurostat’s, (2014), COPD (Chronic Obstructive Pulmonary Disease) affected more than 200 million people worldwide and is one of the major diseases whose prevalence is increasing across the globe.

On the basis of diagnosis, the primary ciliary dyskinesia market is segmented into genetic testing, electron microscopy, and others.

On the basis of end user, the primary ciliary dyskinesia market is segmented into hospitals & clinics, research centers, and others.

Europe holds the second largest primary ciliary dyskinesia market across the globe due to encouraging government policies for research & development and healthcare professionals by various European countries such as France and Germany. Moreover, according to Eurostat’s, (2014), over 401000 deaths were caused by respiratory system diseases, which are equivalent to 8.0 % of all deaths. Proportion of deaths in the UK from respiratory diseases is considerably higher than the other European countries, which will drive the market growth in this region during the forecast period.

Asia Pacific is the fastest growing market owing to more number of developing nations present in this region, for instance, countries like India, china are encouraging the growth of the healthcare domain. Furthermore, increasing patient population from respiratory diseases in developing countries will directly increase the demand for various treatment methods and will boost the growth of the primary ciliary dyskinesia market.

Primary Ciliary Dyskinesia Market is Expected to Grow at a of CAGR of ~6.7% by 2023