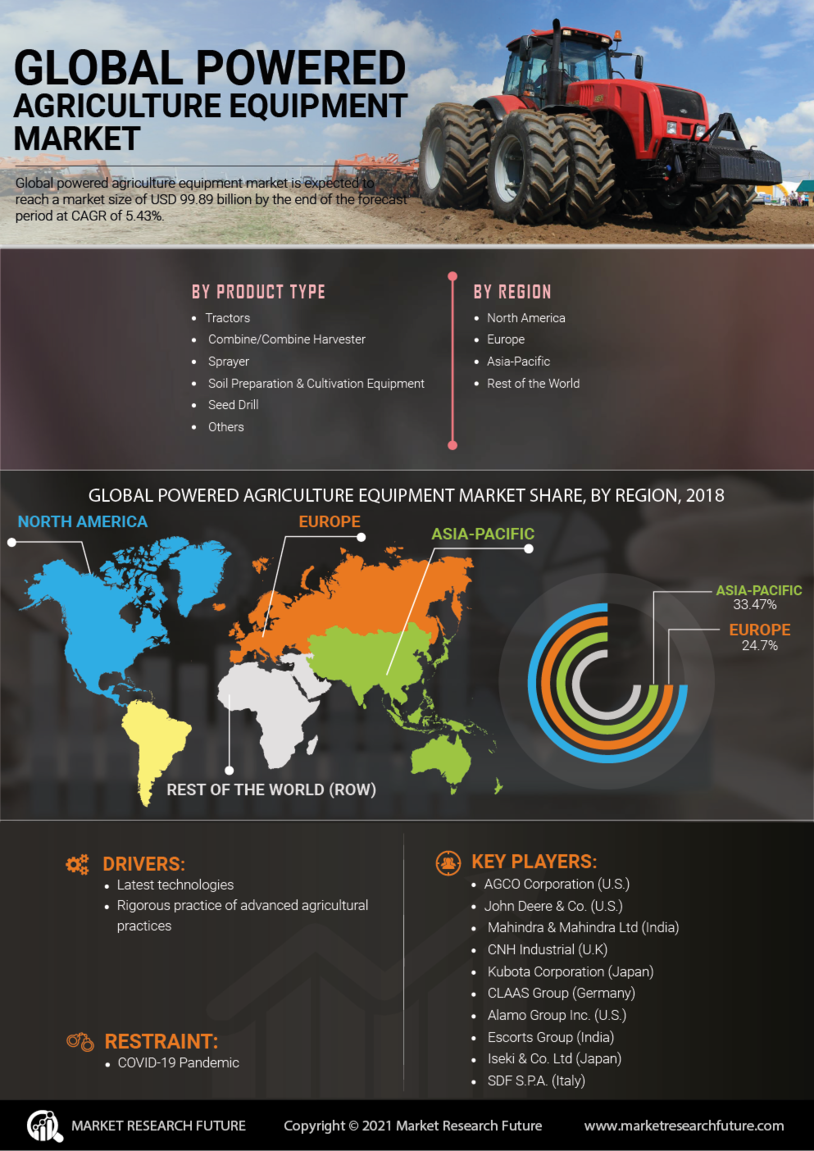 Powered agriculture equipment market is expected to reach a market size of USD 115 billion by the end of the forecast period at CAGR of 5%.

Based on product type, the powered agriculture equipment market has been divided as tractors, combine/combine harvester, sprayer, soil preparation & cultivation equipment, seed drill and others. Tractors segment accounted for the largest market share of 52.4% in 2016, with a market value of USD 36.37 billion. Tractors are essential in the agriculture industry and they are the highest volume segment in the market. The high sales of tractors can be attributed to their multifunction. This is because they are usable as agricultural equipment in monsoons and for other transport and commercial purposes. India is the leading tractor market, globally, followed by China and the USA.

Combine harvesters was the second-largest market in 2016, valued at USD 9.5 Billion in 2016. Combine harvester is among the most expensive agricultural equipment in the market. It combines the process of reaping, threshing, and cleaning grains, and collecting them in a grain tank fitted in the machinery. Soil preparation & cultivation equipment segment is projected to grow at the highest CAGR of 5.59%. There are different equipment to be used for soil preparation and cultivation such as cultivator, plow, rotary tiller, and others. Sprayers are significant in agriculture process as they help in proper and timely application of herbicides, pesticides, fungicides and other products used for crop protection. The Crop Protection Products (CPP) are applied to the crops through sprays and are necessary for better yields. Thus, powered agriculture equipment is of great use in such applications.

On the basis of region, Asia Pacific accounted for the largest market share of 33.47% in 2016, with a market value of USD 115 billion and is projected to grow at the highest CAGR of 6% during the forecast period. The region comprises more than 60% of the world’s population and is predicted to increase in the future, due to which the country is facing issues of food shortage. This generated the need of increasing food production. Use of agricultural equipment and machinery has proven to be an effective way to increase food productivity. Additionally, countries such as India, China, and Indonesia, majorly promote agricultural production in the Asia Pacific region. In India, a large number of people are connected with the agriculture sector. The major factor that favors the market is the amount of subsidies by both central and state governments, which encourage farmers to buy farm equipment.

North America was the second-largest market in 2016, valued at USD 20.2 Billion in 2016. North America is the major producer of wheat, corn, and soybean, which require the use of agricultural equipment, thereby driving the growth of the market. US accounts for the largest share in the North America market. There are presently more than 2.2 million farms in the U.S., covering an area of 922 million acres. Canada is also the major market for powered agriculture equipment and is expected to grow at a CAGR of 5.00% during the forecast period. The European market accounts for around 24.7% share in the global agriculture equipment market in the year 2016. Germany and France are the major markets in Europe. Germany is one of the leading exporting countries of agriculture machinery in the world and is ranked first when it comes to agriculture equipment market in Western Europe. John Deere, and Fendt, are among the leading agriculture tractor manufacturers and suppliers in Germany. 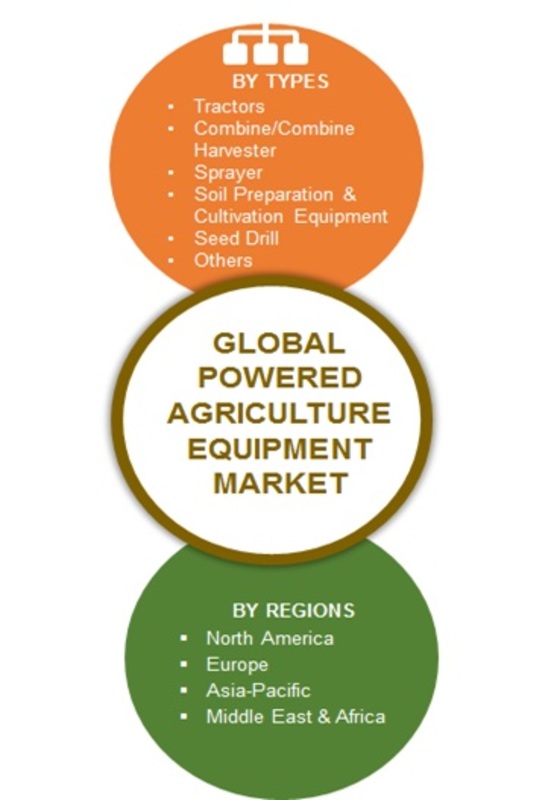 The report for Global Powered Agriculture Equipment Market of Market Research Future comprises extensive primary research along with the detailed analysis of qualitative as well as quantitative aspects by various industry experts, key opinion leaders to gain a deeper insight of the market and industry performance. The report gives a clear picture of the current market scenario, which includes historical and projected market size in terms of value and volume, technological advancement, macro economical and governing factors in the market. The report provides details information and strategies of the top key players in the industry. The report also gives a broad study of the different market segments and regions.

At what CAGR can the powered agriculture equipment market expand?

The powered agriculture equipment market can thrive at 5.43% CAGR by 2023.

What is the estimated valuation for the APAC powered agriculture equipment market?

The APAC powered agriculture equipment market can value at USD 23.3 Bn by 2023.

Who are the key players of the powered agriculture equipment market?

What is the types of powered agriculture equipment?

What is the powered agriculture equipment market driver?

The powered agriculture equipment market is expected to surge due to rigorous practice of advanced agricultural practices.

Powered Agriculture Equipment Market Size Expected To Grow At A Cagr Over 5.43% From 2020 To 2027