Polymer Resin Market accounted for more than USD 76 Billion in 2018 and expected to reach around USD 121.43 Billion in 2025, registering a CAGR of over 6.83% during the forecast period. Polymer resin is a liquid plastic product that hardens to make durable and thick coatings. These resins have the greatest extent of crosslinking it is produced by soaping organic compound, i.e. thermosetting plastic. It is significantly used in electrical & electronics, construction, packaging, and medical industries. For instance, Furukawa Electric Co., Ltd, a Japanese electric and electronics equipment company reported that around 40% of global polymer resin produced is used to manufacture plastic bags or food packaging products.

In the automotive industry, polymer resin is used to manufacture bumpers, seat belts, and carpets. The automobile manufacturers are opting for polymer resin owing to its distinctive lightweight properties. Further, the increasing adoption of electric vehicles is surging the need for lightweight materials, which, in turn, is driving the growth of the global polymer resin market. The rising production and sales of electric vehicles are estimated to drive the growth of the global polymer resin market. For instance, according to the American Automotive Policy Council, reported that the automobile production in the US is expected to exceed 11 million in 2021 and projected to reach 12 million in 2025. Europe is the world's largest manufacturers of automobiles, and the sector represents 4% of the European GDP. Thus, increasing investment in the automotive industry is expected to surge the demand for polymer resin across the globe. 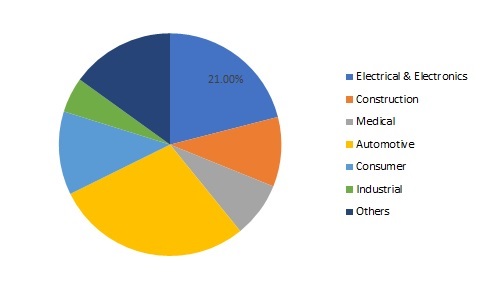 North America leads the global polymer resin market with significant market share as there is a large number of petroleum-based manufacturing companies located in the country; furthermore, a high focus oil & gas extraction has increased the production of synthetic polymer in the region. The cosmetic and personal care industry is growing at remarkable pace owing to huge public funding and favourable government regulations & policies, which is estimated to drive the demand for polymer resin during the forecast period.

The European polymer resin market is driven by increasing application in medical devices and equipment. The European medical industry has been growing exponentially due to rise in geriatric population and increasing number of chronic diseases. The market in Asia-Pacific is likely to register steady growth owing to the flourishing construction activities in the region. In addition, the governments of China and India have been focusing on development of electronic and consumer sector, which is favoring the adoption of polymer resin.

The markets in the Middle East & Africa and Latin America are expected to register significant CAGR owing to the increasing demand from automotive and construction industries.

The global polymer resin market has been segmented on the basis of resin types, application, and region. Based on resin types, the global market has been segmented into polystyrene, polyvinyl chloride, polypropylene, expandable polystyrene, and others. The polyvinyl chloride segment is estimated to lead the segment. The application segment includes electrical & electronics, construction, medical, automotive, consumer, industrial, and others. The automotive segment is estimated to exhibit significant growth owing to the increasing sales of automobiles in Asia-Pacific and Latin America across the globe demanding greater proportion of polymer resin in the industry.

What will be the possible market valuation of the polymer resin market?

At what CAGR is the polymer resin market expected to grow over the forecast period?

Which region is predicted to lead the polymer resin market?

North America is predicted to lead the polymer resin market during the forecast period.

Who are the key competitors in the polymer resin market?

What are the strategies adopted by key players to stay ahead in the polymer resin market?

Key players have adopted strategies such as product launches, mergers and acquisition, and partnership to stay ahead in the market.