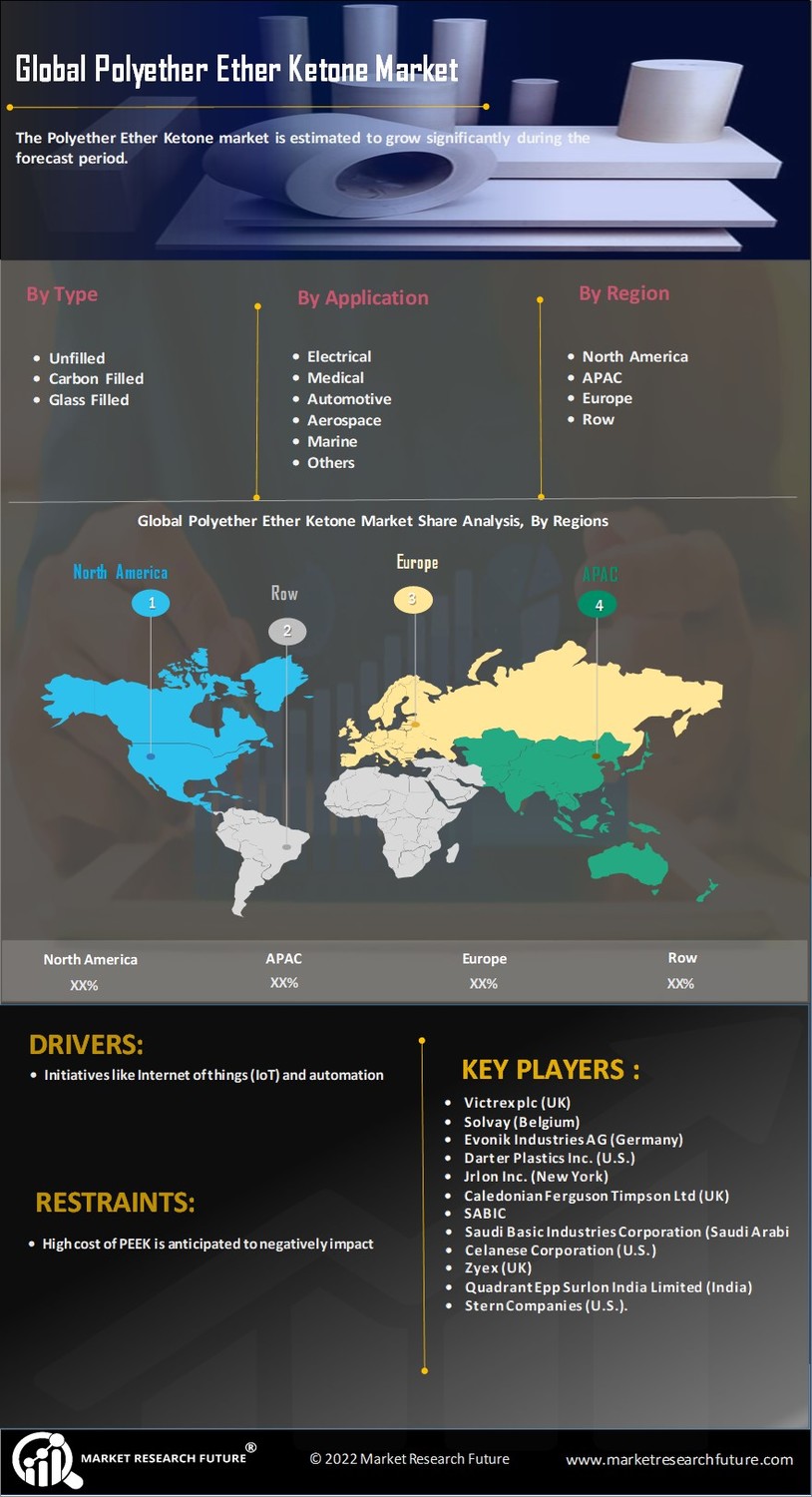 Polyether Ether Ketone Market Overview Polyether Ether Ketone Market is projected to be worth USD 1225.8 million by 2027, registering a CAGR of 6.9% during the forecast period (2021-2027). PEEK (polyether ether ketone) is a chemically and mechanically resistant partly crystalline polyaromatic lining thermoplastic. It is used in a variety of industries, including electronics, medical, automotive, aerospace, and others. Because of its increased durability, wear resistance, and abrasion resistance, it is commonly employed in the production of electronic components. Because of its high mechanical qualities and great temperature tolerance, polyether ether ketone is becoming more used in the electrical industry. Global polyether ether ketone market expansion is being fueled by rising demand for miniaturization in electronic gadgets. Product demand is being fueled by rising digitization combined with rising consumer purchasing power. Internet of things (IoT) and automation initiatives are important driving drivers for the polyether ether ketone industry. Biocompatibility is causing a surge in product demand in the healthcare industry. Because of its similar mechanical qualities to bone and less stress shielding, PEEK is extensively utilized in dental implants in place of titanium metal. In the long run, the market is likely to be driven by the increased use of lightweight materials and PEEK in the electrical and electronics industry. During the projected period, the availability of cheaper alternatives is expected to stifle market growth. The expanding number of applications in the healthcare industry is likely to function as an opportunity for the market.

Polyether ether ketone (PPEK) is a partially crystalline polyaromatic liner thermoplastic with high chemical and mechanical resistance properties. It finds application in various end-use industries such as electronics, medical, automotive, aerospace, and others. It is widely used in the manufacturing of electronic components due to enhanced durability, strong wear, and abrasion resistance properties.

Polyether ether ketone utilization in the electrical industry is rising due to its strong mechanical properties and extreme temperature resistance. Rising demand for miniaturization in the electronic devices is propelling the polyether ether ketone market growth globally. Growing digitalization coupled with increasing purchasing power among consumers is fuelling the product demand. Initiatives such as the Internet of things (IoT) and automation are major driving factors for polyether ether ketone market. The product demand from healthcare sector is booming as a result of biocompatibility. PEEK is widely used in dental implants in place of titanium metal owing to less stress shielding and similar mechanical properties of PEEK and bone. Solvay S.A., a key player in the PEEK market, introduced two products under the brand name Zeniva ZA- 500L and ZA- 600L for use in implantable devices. Flourishing automotive and aerospace industries across the regions are augmenting the polyether ether ketone market growth. For instance, in 2016, Victrex PLC introduced new product under the brand name VICTREX AE 250 composites for the aerospace industry to increase the efficiency of aircraft. The company also entered into a joint venture with Tri-Mack plastics in 2017 to accelerate adoption of polyketone composite for the aerospace industry. The steps taken by the company are in tune with the increasing demand for the aircraft worldwide. 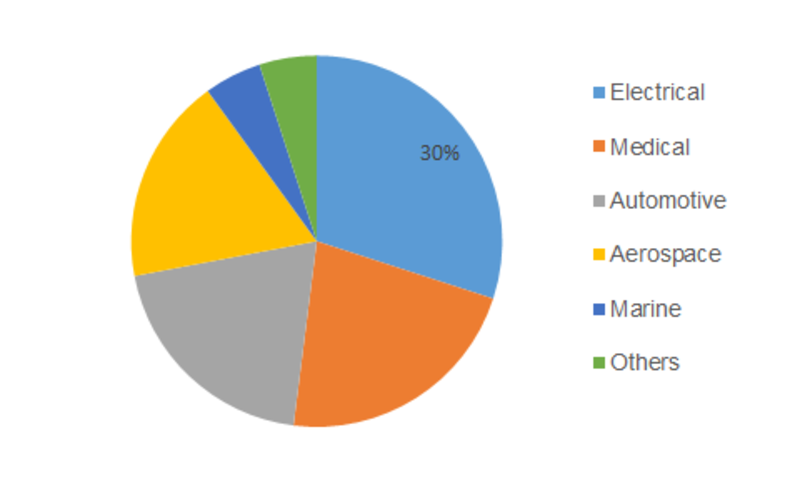 Asia Pacific was the largest market in the global polyether ether ketone market in 2016 due to the rising demand for the electronic gadgets such as smartphones, home appliances, and telecommunication. Initiatives taken by the Indian government in 2015 such as Faster Adoption and Manufacturing of Electric and Hybrid (FAME) vehicles in India are driving the polyether ether market. Increasing penetration of digitalization among the young generation is propelling the market for PEEK in this region. China is the largest consumer of PEEK as a result of growing electrical industry along with the significant rise in per capita disposable income. Increasing production of automobiles in the developing countries such as India, China, and Thailand owing to rising disposable income of the consumers. Shifting manufacturing base from developed countries to the developing countries due to low production cost is another factor driving the market growth in this region.

North America is another prominent polyether ether ketone market for PEEK due to increasing consumption of the product in various industries such as electrical, aerospace, marine, and healthcare. Surging demand for consumer electronics coupled with high purchasing power is driving the market growth in this region. Increasing use in the healthcare industry owing to rising investment in spinal fusion is fuelling the product demand.

European market is expected to witness a considerable growth owing to rising investment in healthcare by the consumers. Growing automotive industry in Germany, Spain, and Russia is expected to drive the product demand in this region.

The growing demand for the automotive industry in the Latin America and the Middle East & Africa is expected to augment the polyether ether ketone market further.Recent Development


Solvay S.A., a major player in the PEEK market, has announced two new products for implanted devices called Zeniva ZA- 500L and ZA- 600L. The industry is being aided by the flourishing automotive and aerospace sectors in various countries. Victrex PLC released a new product called VICTREX AE 250 composites for the aerospace industry in 2016, to increase aircraft efficiency. In 2017, the company formed a joint venture with Tri-Mack Plastics to help the aerospace sector embrace polyketone composites faster. The company's actions are in line with the growing demand for airplanes around the world.

What are the major end users of PEEK market?

What is the major driver for the market of Polyether Ether Ketone?

Growing demand for electrical components and electronics is the major driver for the PEEK market.

Which is the leading regional Polyether Ether Ketone Market ?

Asia Pacific is the largest regional market for PEEK due to the growing electronics industry in the region.

Who are the leading Polyether Ether Ketone Market players?

Leading players in the PEEK market include Solvay, Victrex, and SABIC, among others.

Increasing use of Polyether Ether Ketone in major end-use industries to drive the product demand ...