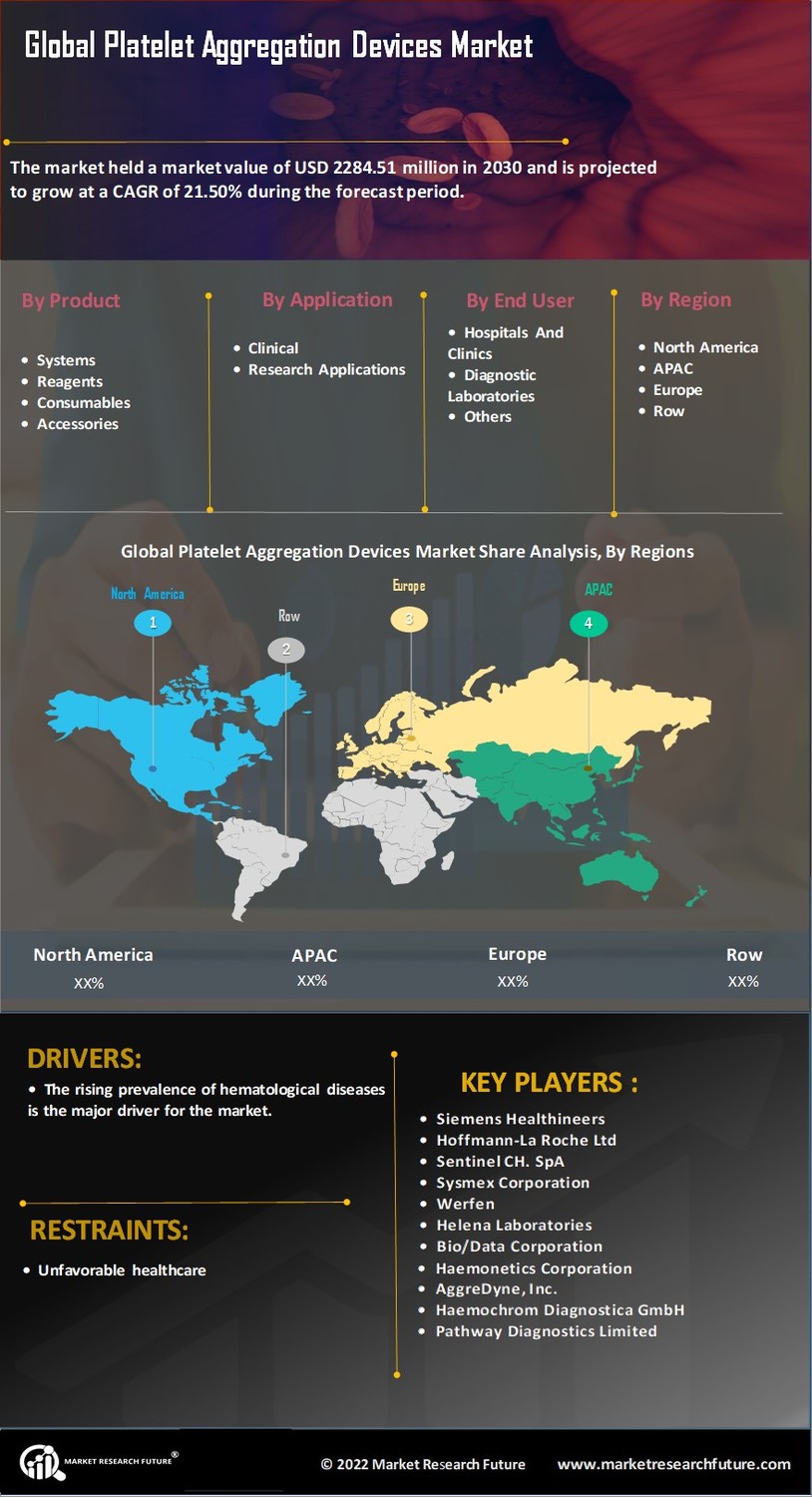 The global platelet aggregation devices market is projected to account for USD 2284.51 million by the end of the year 2030. Further, this global market is estimated to expand at a CAGR of 21.50% during the research period. In platelet aggregation, the platelets are clumped within the blood, which results in the formation of a thrombus or a clot.

However, the global market for Platelet Aggregation Devices might face restraints due to the procedural limitations and existing unfavourable healthcare reforms in the US during the assessment period.

The global platelet aggregation devices market has been segmented into product, application, and end user.

By product, the market has been segmented into systems, reagents, and consumables and accessories. In 2017, the systems segment dominated the market due to continuous technological advancements in sensors and detectors, increasing automation of platelet aggregation testing procedures, and growing adoption and market preference for automated instruments among diagnostic laboratories

Based on end user, the market has been categorized into hospitals and clinics, diagnostic laboratories, research and academic institutes, and others.

Geographically, in 2017, the Americas led the global platelet aggregation devices market due to the presence of device manufacturers, surging number of surgical procedures, growing awareness among healthcare professionals (HCPs) about the benefits offered by platelet aggregation testing in disease diagnosis, and significant investments in R&D activities which utilize platelets. For instance, according to the National Center for Health Statistics, in 2009, about 48.0 million surgical inpatient procedures were performed in the US, which grew to 1.54 million in the year end 2017.

The availability of affordable platelet function tests and expanding distribution channels, surging number of cardiovascular surgeries, new technological developments in platelet aggregators, and increase in number of clinical studies in the UK, Germany, and France is expected to support the second largest position of Europe in the global market. For instance, as per the data published by the European Medicines Agency (EMA) and the British Medical Journal, approximately 4,000 clinical trials of medicines are authorized annually in the European Union (EU).

The market in Asia-Pacific would witness the fastest growth during the forecast period attributed to growing geriatric population coupled with rising prevalence of chronic diseases, increasing adoption of new technological devices, and rising incidences of mosquito-borne diseases, namely, malaria and dengue. According to the World Health Organization, severe dengue is a leading cause of serious illness and death among children in some Asian and Latin American countries. More than 40.0% of the world’s population in more than 100 countries are at risk of dengue infection. The most significant dengue epidemics in recent years have occurred in Southeast Asia, the Americas and the Western Pacific. An estimated 390.0 million dengue infections occur across the globe every year.

The platelet aggregation devices market was valued at USD 2284.5 million in 2030.

The global platelet aggregation devices market is expected to exhibit a strong 21.50% CAGR over the forecast period from 2020 to 2030.

The rising prevalence of hematological diseases is the major driver for the market.

Leading players in the market include Siemens, Werfen, Haemonetics Corporation, AggreDyne Inc., and Sysmex, among others.