Please note that the assessment period of report has been updated from 2016-2025 to 2020-2027. Cordially fill the sample form for updated data. 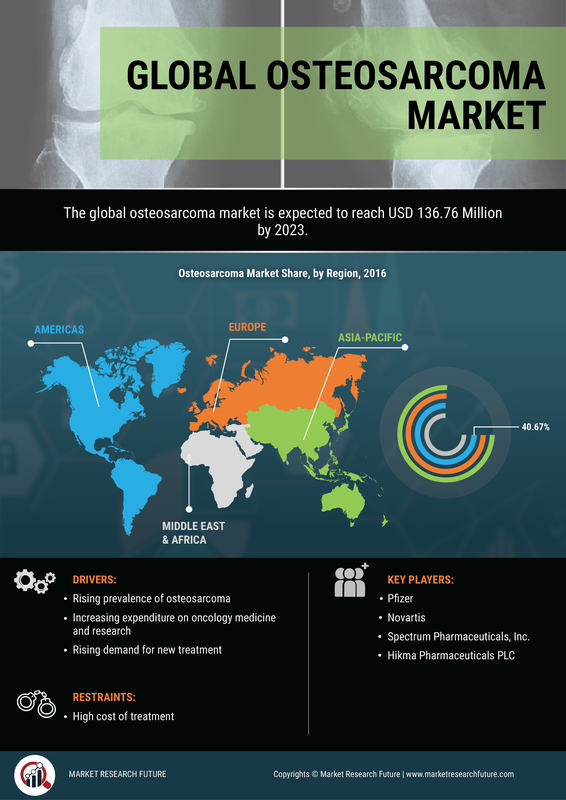 Osteosarcoma is a common type of bone cancer that is developed in cells that are responsible for the formation of bones. In very rare conditions osteosarcoma occurs in the soft tissue outside the bones. Generally, it mostly occurs in teenagers, young adults, and older adult population.

The global osteosarcoma market is primarily driven by the high incidence of osteosarcoma, rising expenditure on oncology medicine and research, and the rising demand for new treatments. However, the high cost of treatment and side-effects of chemotherapy are hampering the growth of the market.

Moreover, the National Cancer Institute's Surveillance, Epidemiology, and End Results Program estimated the incident rate of 4.4 cases per 1 million people below the age of 24 years in the US each year. This cumulative prevalence of osteosarcoma along with the rising geriatric population are driving the global osteosarcoma market.

The Global Osteosarcoma Market has been segmented into type, diagnosis & treatment, end-user, and region.

On the basis of end-user, the global osteosarcoma market has been segmented into hospitals & clinics, diagnostic centers, and academic & research organizations. Its hold largest market share can be attributed to an increase in the number of patients who have cancer, coupled with a rise in a number of hospitals, and quality care, and availability of skilled and qualified professionals.

The Global Osteosarcoma Market is broadly segmented based on region into the Americas, Europe, Asia-Pacific, and the Middle East & Africa.

The Asia-Pacific region has been categorized as China, India, Japan, Australia, South Korea, and the rest of Asia-Pacific. It holds the third-largest position in the osteosarcoma market.

The market in the Middle East & Africa is likely to exhibit the lowest growth due to factors such as limited access to and availability of treatment facilities. However, the high prevalence of bone cancer population would support the growth of the market in the region during the forecast period.

At what CAGR is the Osteosarcoma Market projected to grow during the forecast period?

Which region is expected to dominate the Osteosarcoma Market?

The Americas is expected to dominate the Osteosarcoma Market.

What will be the value of the Osteosarcoma Market during the forecast period?

What are the different end users of the Osteosarcoma Market?

Different end users of the Osteosarcoma Market include diagnostic centers, hospitals and clinics, and academic and research organizations.

Which factors may limit the Osteosarcoma Market growth?

Side effects of chemotherapy and high treatment cost may limit the Osteosarcoma Market growth.