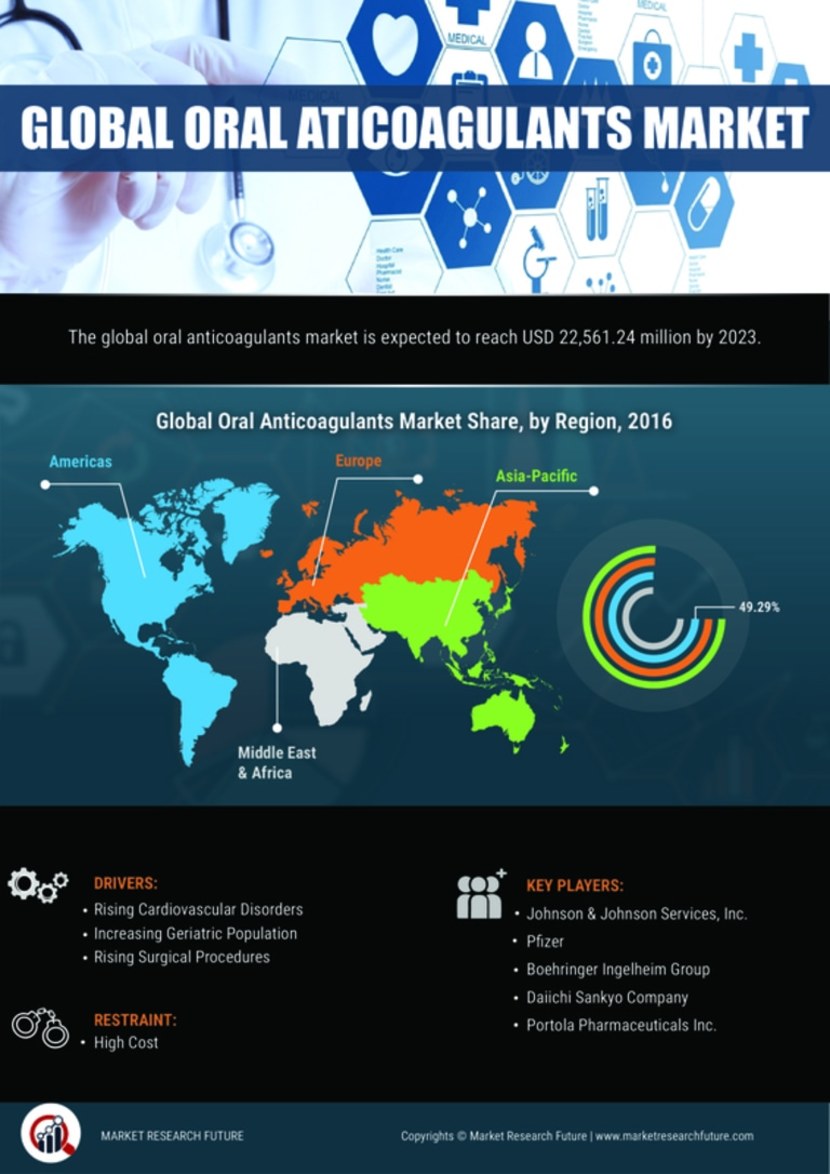 Oral anticoagulants which are also known as blood thinners are widely used by doctors to decrease or reduce the coagulant of the blood during the blood clotting period. There are a number of medical conditions where the blood clotting risk is relatively high, such conditions include deep vein thrombosis, atrial fabrication, myocardial infarction, stroke, pulmonary embolism, and others. There was a massive growth in the global anticoagulant industry during the forecast period.

The growth of the global market of oral anticoagulant is determined by several factors including the increase in the generality of the venous thromboembolism (VTE)  and other cardiovascular disorders, The demand of the novel oral anticoagulants (NOACs), and the arises apprehension of novel oral anticoagulants the developing countries are the major factor for the growth of the market. The support for the growth of the market also comes from the increase in the number of elderly people and above, demand for novel therapeutics, and elevated unmet needs. The shortage of antidotes for NOACs and the higher or expensive prices of NOACs hampers the market growth during the forecast period. The value of the global anticoagulants market in 2017 at $24.265 million and is anticipated to reach $43,427 million by the end of 2025 with a growing CARG of 7.5% from 2018 to 2025

The demand for the oral anticoagulant has increased due to the covid 19 pandemic. Though the market is facing some challenges due to the outbreak of the pandemic. Variation in the organic traffics and the response of the industries to the covid 19 cases has distinguished the market by generating alternatives. The report provides an analysis of the anticoagulants and injectable which are available in the market.


The rise in the geriatric population, the increment in cardiovascular diseases, and the increase in the demand for surgical procedures are supporting the growth of the oral anticoagulant market shares during the forecast period.

On the basis of the reports from the Center For Diseases Control and Prevention, there are nearly 46.5 million procedures of surgeries are performed in the United States, every year. And according to the researches or reports from European Heart Network, 85 million population of in the European countries are living with cardiovascular disorders and according to the population prospects, the cases of aged people of 60 years or more are anticipated to double by the end of 2050.

The data comprises the competitive scenarios of the global oral anticoagulant and it includes the economical and technical environment and the high growth regions and their political. These factors are linked with the growth of the market.


According to the study, the anticoagulant growth momentum includes the increased incidence of cardiovascular diseases, the increase in the elderly population, and the newly listed drugs which are the improved versions of the existing drugs. On the basis of the evaluated pharmacy report, the highest annual growth rate of the top 15 treatment areas is due to the increased uses of Bayer’s Xarelto(rivaroxaban) and ringer’s Pradaxa (Clopidogrel) and clesulenol (enoxaparin). The two most favorable drugs in the anticoagulants are direct coagulation factor lla inhibitos which is representing the drug: Dabigatran etexilate and inhibitors of direct coagulation factor Xa which represents drugs: rivaroxaban, apixaban, etaneraban. FDA has approved three new oral anticoagulant drugs which are in use for the past few years. Pradaxa (dabigatran), Xarelto (rivaroxaban), and Eliquis (apixaban) are considered as the major advance in thromboprophylaxis and in the field of anticoagulant therapy.

The other contributing factors which are associated with pulmonary embolisms such as cancer obesity and heart attack are expected to drive the growth of the market.


The retail pharmacy segments are expected to hold the largest number of shares after the hospital pharmacy. The increased cases of re-filling the prescriptions and the efficient facilities proved by the institutes are the major factors driving the growth of the market.

On the basis of the regions, the global oral anticoagulant market is divided into the Americas, Europe, Asia-pacific, and the Middle East and Africa. The global anticoagulant market is expected to influence by the Americas. The increasing rates of cardiovascular disorders and the growth of surgical procedures. The European countries have shown a tremendous amount of growth due to the rising geriatric population in the market. It is estimated that Asia-pacific is the fastest-growing region of the market and the factor contributing to the growth of the market here are the rising populations and increased rates of cardiovascular diseases. The Middle East and Africa hold the least amount of shares as compared to the other regions.

The key strategies followed by the key player’s handling in the oral anticoagulant market shares were acquisition, launch, and expansion. Daiichi Sankyo Company Ltd launched oral anticoagulant Lixiana OD Tablets of dosages 15 mg, 30 mg, and 60 mg in 2017. Portola Pharmaceuticals Inc. received FDA approved Betrixaban for the prophylaxis of Venous Thromboembolism (VTE) in adult patients in the 2017and year 2016 Medicure received approval from the US FDA for its new "bolus vial" product.

The major key players of the global oral anticoagulant market are as follows.

This report is to point out the high points of the oral anticoagulant markets in terms of the revenue hike by end of the global forecast year 2023.

The global oral anticoagulants market is expected to reach a valuation of USD 22.5 billion by 2023.

The global oral coagulants market is expected to exhibit a strong 12.5% CAGR over the forecast period from 2020 to 2027.

The increasing prevalence of cardiovascular disorders is the major driver for the oral anticoagulants market.

The Americas is expected to dominate the global oral anticoagulants market.

Leading players in the oral anticoagulants market include Eli Lilly, AstraZeneca, GSK, Daiichi Sankyo, and Medicure, among others.