Oil Country Tubular Goods Market is expected to be valued at USD 16.41 Billion, with a CAGR of 8% Forecast by 2030

Components used in the production of oil and gas from wells are known as oil country tubular goods (OCTG). The right application of OTCGs can assist reduce the likelihood of any mishap, hazard, or risk, lowering a company's manufacturing costs. OCTGs are tubular goods that are employed in offshore and onshore reservoirs for production and exploration. Drill pipe, casing, and tubing are all part of the OCTG family of seamless rolled goods, which are subjected to loading requirements based on their respective purposes. These are some of the most common tools used in oil and gas exploration. OCTG manufacturing businesses are growing their investments in various places to secure a bigger base of energy resources.

Increased exploration and production (E&P) operations, as well as rising sour crude production, are propelling the OCTG industry forward. Due to the growing global economy, oil output in North America, the Middle East, and Africa has been steadily expanding in recent years. Furthermore, because of the high refining expenses of sweet oil, sour crude prices are lower than sweet crude pricing. This is a primary component driving the rise in sour crude production over the anticipated timeframe.

The factors driving the growth of the OCTG market are increasing exploration & production (E&P) activities and growing production of sour crude. North America and the Middle East & Africa are the regions with the highest oil production in the world. Furthermore, a majority of the oil produced in these regions is sour crude. Oil production is increasing at a steady rate in these regions in the past few years due to the improving global economy. Additionally, the sour crude prices are lesser than sweet crude prices due to the high refining costs of the latter. This is a major factor driving the increasing production of sour crude during the forecast period. According to the BP Statistical Review of World Energy 2019, the production of crude oil in North America increased from 20,157 TBPD in 2017 to 22,587 TBPD in 2018. This number is expected to increase further during the forecast period. Moreover, the demand for diesel is growing due to the growth in electricity generation and motor vehicle production. Sour crude is highly corrosive and high-quality OCTGs are used to minimize the risk of leakage into the surroundings. Due to the highly corrosive nature, premium grade products that will be operable for a more extended period in the oil well are mostly used for the production of sour crude. 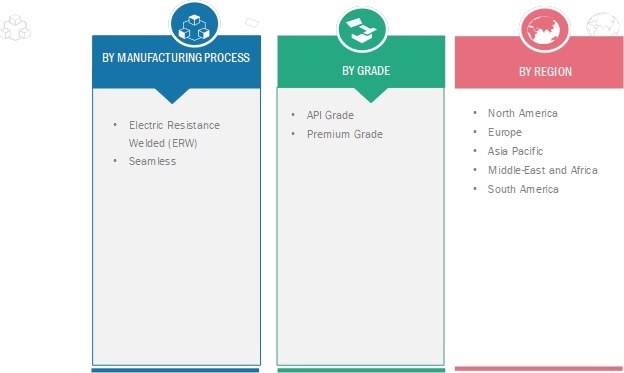 The oil country tubular goods (OCTG) are components that are used in the production of oil and gas from wells. The proper use of OTCGs could help reduce the probabilities of any mishap, hazard, and risks that ultimately reduce the production cost of a company. OCTGs are tubular goods that are used in production and exploration activities on offshore and onshore reserves. OCTGs are a family of seamless rolled products that consist of drill pipe, casing, and tubing, which are subjected to loading conditions according to their specific applications. These products are some of the main tools used in oil and gas exploration processes. OCTG manufacturing companies are focused on securing a larger base of energy resources by increasing their investments in various regions.

Geographically, the global market of oil country tubular goods has been segmented into five major regions, namely North America, Europe, Asia-Pacific, the Middle East & Africa, and South America. North America is expected to hold the major market share during the forecast period, owing to the increasing well drilling, rise in exploration and production activities in the oil & gas industry, and growing production of sour crude.

The report for the global oil country tubular goods market of Market Research Future research covers extensive primary research. This is accompanied by a detailed analysis of qualitative and quantitative aspects by various industry experts and key opinion leaders to gain deeper insights into the market and industry performance. The report gives a clear picture of the current market scenario, which includes the historic and forecasted market size, in terms of value and volume, technological advancement, macroeconomic, and governing factors of the market. The report provides comprehensive information about the strategies of the top companies in the industry, along with a broad study of the different market segments and regions.

What is the CAGR of the oil country tubular goods market?

The oil country tubular goods global market can thrive at high pace by 2025.

What is the market value for oil country tubular goods industry?

The market can generate substantial by 2025.

Mobile and industrial are some oil country tubular goods applications.

What is driver of the oil country tubular goods global market?

The rise in need for oil based goods can drive the market.