Offshore Lubricants Market is expected to grow at 4.10%% CAGR during the forecast period.

The offshore lubricant is a substance that eases friction and wears at the interface of the two constituents. It helps in decreasing the abrasion by dropping the shear strength of interface. Lubrication is a process of using resources to increase the evenness of the drive of one surface over other. It helps in reducing the adhesive friction by lowering the shear strength of the interface. Lubricants can be solid, liquid or semi-liquid, and gas, or a combination of solid, liquid, and gas. Offshore machinery is used in exploration and drilling of offshore resources. These lubricants help improve reliability, efficiency and performance of offshore machinery and equipment. These lubricants improve the performance of hydraulic machinery, engines, gears, turbines and other machines. Offshore equipment improves operational efficiency and extends the life of equipment.

Lubricants have a major impact on maintenance costs and the service life of components. Offshore lubricants producers across the world, work in close coordination with both, component manufacturers and shipping industry equipment manufacturers to increase service intervals and life of components while increasing the operational reliability. The investment in a lubricant may be relatively small, but it can make a big difference. Reducing the environmental impact is essential in the shipping and offshore industry. As a shipping operator, it has become essential to be aware of the expanding body of environmental regulations affecting their business. Additionally, a growing interest in ecological issues drives the customers to demand environmentally sound operating process.

Global Offshore lubricants market has been segmented based on application, end-use, and region. Engine oil segment by application currently holds the largest share and is expected to hold its dominance in the offshore lubricants market during the forecast period. Engine oils are widely used in vessel engines, boat engines, and container engines. Engine oils play a crucial role in assisting engines to ideal efficiency in their output. These oils are used for speed and stoke cycle of the engines. Engine oils prevent engines from rust, wear and tear. Growing maritime activities across the globe are expected to drive engine oils demand over the forecast period. Whereas, the OSVs by end-use held the largest market share in 2016; expected to hold the largest share during the forecast period. OSVs are largely used as support systems for offshore drilling and production sectors. The increase in OSV utilization due to rising deepwater reserves exploration, and production, will lead to better maintenance, resulting in higher demand for lubricants such as engine oils, compressor oils, transmission oils, gear oils and hydraulic fluids.

The global offshore lubricants market is expected to grow at ~ 3.5% CAGR during the forecast period. 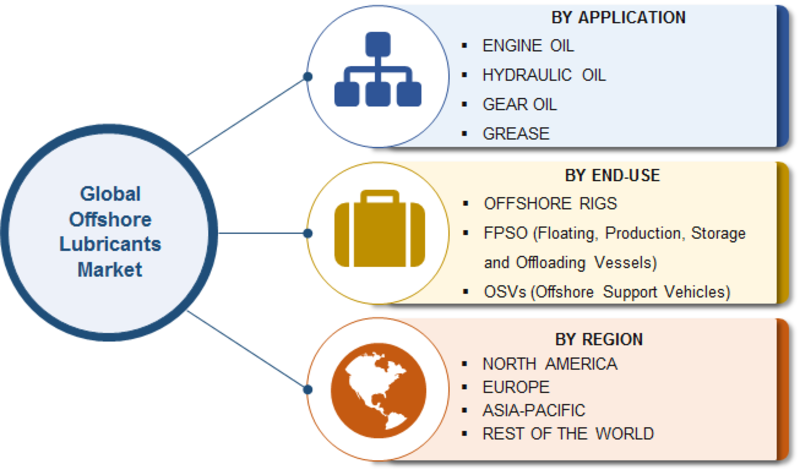 Various factors drive the growth of offshore lubricant market in different regions across the globe. The major factor boosting the market growth is the growth in offshore oil & gas exploration and production activities, particularly in the Gulf of Mexico, Caspian, Arabian Sea and the Red Sea.  The growth in the deep sea exploration activities across the globe is expected to remain a key driving factor for the global offshore lubricants market. Stringent regulations regarding threat to flora and fauna on account of unregulated disposal of marine lubricants, coupled with volatile petrochemicals pricing have led industry key players to develop bio-based alternatives.

At what CAGR is the offshore lubricants market projected to grow in the forecast period (2020-2030)?

Who are the top players involved in the offshore lubricants market?

Which sector from the application segment would dominate the offshore lubricants market growth?

Which end user segment would dominate the offshore lubricants market?

What would trigger growth for the offshore lubricants market?

Ability to reduce cost, curb carbon emission, increase tool durability, simplifying the work process, and others would ensure a better intake of offshore lubricants and inspire growth for the market.