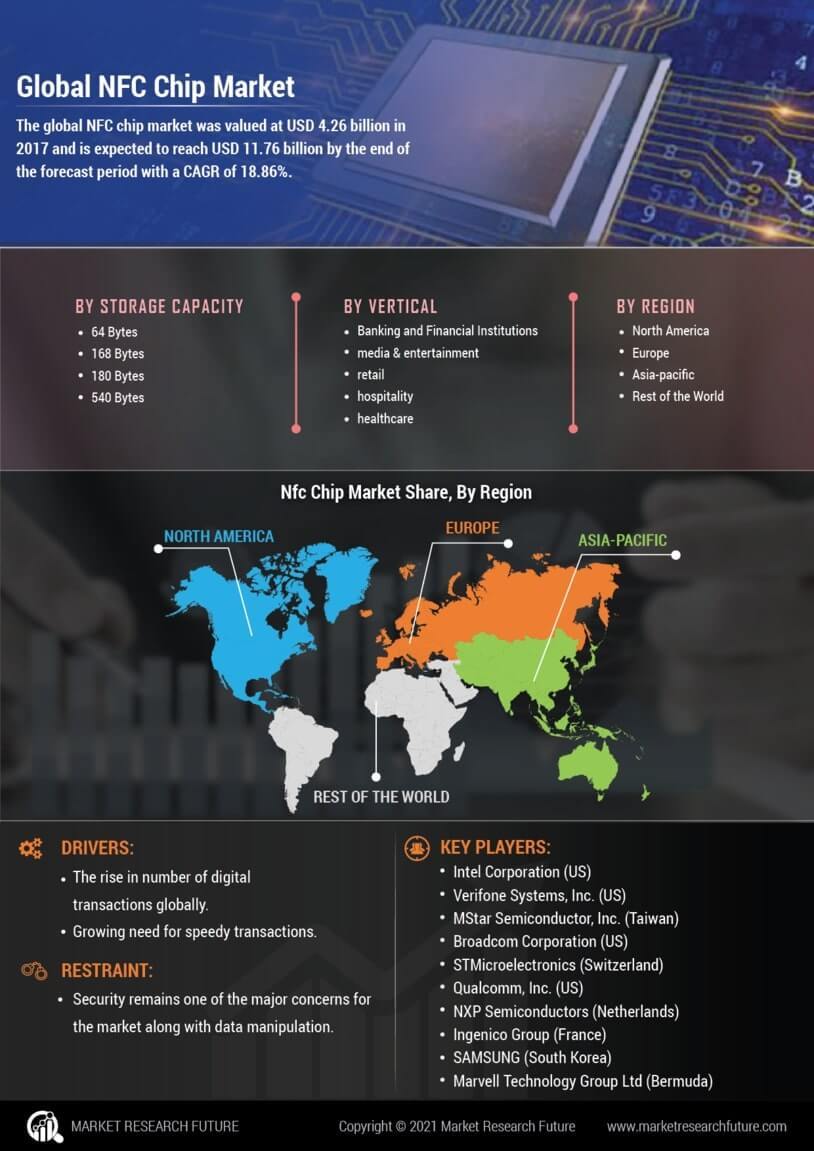 Globally, the size of NFC Chip market is set to grow at a CAGR of 18.86% from a value of USD 4.26 billion in the year 2017 to hit USD 11.76 Billion by 2023 driven by the increase in the mobile commerce trends has been observed and that happens to be rapidly increasing the unprecedented growth.Near field communication is a short-range wireless connectivity technology that makes life more convenient and easier for consumers globally by allowing the simpler exchange of transactions, digital content and connection with different electronic devices. It is generally used in laptops, smartphones, and tablets for a very short range of data exchange. This technology is used for payment applications and marketing; though, it is also used in several other applications such as ticketing, chip-enabled mobile marketing, identity & access, and gaming.

The global NFC market is predicted to show vigorous growth during the estimated period. The need for convenient transfer and security of data and the production of smartphones is expected to increase the near-field communication market growth. Moreover, the demand for improved customer experience and the increase in demand for contactless payments due to the covid-19 pandemic substantially boosted the market's growth. However, security concerns and short operational range hinder the growth of the market during the near-field communication market estimated period. Instead, the rise in adoption of NFC allowed the wearable technology and recent technological advancements in NFC to create profitable growth opportunities for market growth.

The outburst of the covid 19 analysis has affected worldwide, and it addresses development in three main ways. Natural affection has been based upon demand and production. This leads to the formation of the supply chain, and the market interruption has largely affected the financial system of the market.

The outbreak of the covid 19 analysis has been affected worldwide and it addresses to be emerging in three main ways. Direct affection has been based upon production and demand. This leads to the creation of the supply chain and the market disruption has a huge financial impact on the firm. Hence the analyst has been monitoring the remunerative prospects that produce the post covid 19 crisis. Hence, the report aims to make a supply with the further illustration of the recent scenario, economic slowdown along with the impact on the concise industry of the chip market in this world.

An increase in the mobile commerce trends has been observed and that happens to be rapidly increasing the unprecedented growth of the NFC Chip Market in the last decade. Further, smartphone users have been using NFC technology for making payments. Hence, the NFC enables the POS system that appears to become an important means for transferring the data. The collaboration of the mobile application has been developed by the developed application for enabling the consumers for carrying out the business transactions.

The basic opportunity derived has been the growing adoption of the NFC Chip Market wearable as it becomes an important aspect for increasing the adding of more functions and power limitations. Further, the equipped analysis of the NFC capabilities has been forecasted by the allowance of the popular demand by increasing the access of the mass transport within the office building. The connection has been liable to the contactless secured administration and it relies on the application via the stated market.

An issue on the short-range of communication has been the near field analysis of the market range that must be within the close range of the market with a distance of 4cm. Hence, the major drawback arises to be addressed by the linear technology for the better contact details of the swapping pictures along with the work mechanisms.

The low awareness of NFC technology has been addressed by the growth of the NFC Chip Market and the technology. Further, the reduction of adopting the NFC chips has been idealized and the market segment has been increased according to the growth. Hence, this prospect has affected the unit shipment of the concerned chip analysis. The detailed list of factors has the power to challenge the growth of near-field communication during the report analysis.

The NFC chip market has been growing and is expected to reach nearly USD 11.76 billion within the concise industry. Hence, the CAGR appears to be 18.86% and the NFC Chip Market size in 2017 was calculated to be 4.26 billion. On the other hand, the NFC Chip Market growth has increased due to the high demand and during the pandemic, the growth has been expected to rise even more with opportunities inside the global market.

NFC technology within the chip industry has been used in different perceptions that mainly include speedy transactions for future growth analysis. Therefore, it has been formalized that the innovation along with the automation of the chip market has been addressed prominently. The demand for the market has increased and precisely regulates the technological action of the growth of the NFC Chip Market.

The global NFC Chip Market has been estimated and that counts to make significant growth of the market at a high rate during the centered period. However, the geographical analysis of the market states that the study has been relied upon in North America, South America, Europe, and the Asia Pacific. Thus, the expectation has been held up by the significant share of the chip market during or rather till 2023. Therefore, the high adoption of digital payments has been coupled with the increasing ownership of smartphones along with the internet reach in North America.

According to the recent update, the recent companies have been joining the market and have created a scenario for new innovations and strategies. Therefore, the key players or rather the companies that have huge access to the NFC chip market report analysis for the forecasting period.

NXP Semiconductors has announced breakthroughs in GSMA-compliant eSIM solutions that have made it easier to allocate the device manufacturers.

The report enhances to provide all the important facts and information regarding the growth of the largest market share of the NFC chip market analysis within the forecast period. Apart from that, the different section has been available that helps to get within the depth information that includes mainly the opportunities, drivers, challenges, regional analysis, covid 19 analysis. Market segmentation, and others. Therefore, all of the facts collected have been from the primary and the secondary sources that are entitled to provide information regarding the display of the technologically advanced foldable screens in the future growth of the market.

What is the valuation of the NFC chip market expected to be by 2027?

How big is the NFC chip market?

The NFC chip market is poised to expand at 18.86% CAGR across the evaluation period.

What segments are covered in the report on the basis of storage type?

Increasing adoption of smartphones and rise in inclination towards cashless payments are poised to drive market growth in APAC.

What are the end-use verticals assessed in the report?

The vertical-based segments are BFSI, retail, hospitality, media & entertainment, healthcare, and others.