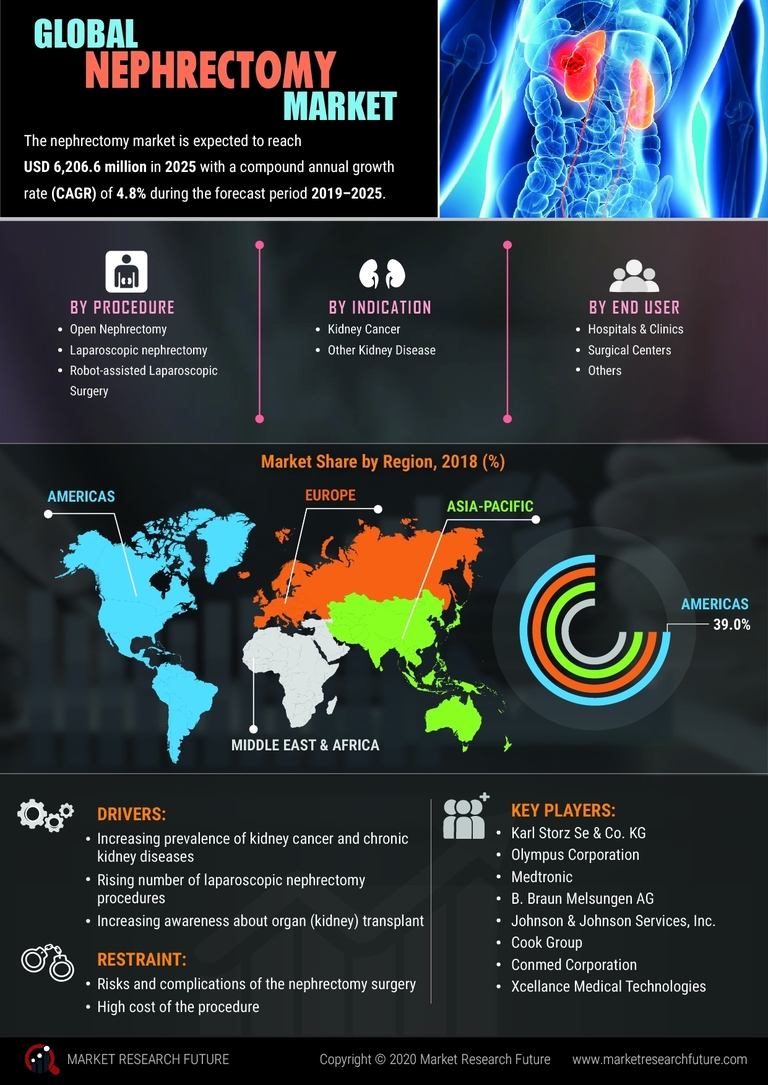 The Nephrectomy Market is projected to reach USD 5264.81 Million by 2030 at 4.20% CAGR during the forecast period 2022-2030.
A nephrectomy is performed to surgically remove the kidney from the human body in order to treat several kidney-related diseases including kidney cancer. It is also used in kidney transplant procedures where a normal kidney is removed from the deceased or living donor.

Nephrectomy is basically of two types one is radical Nephrectomy in which one of the kidneys is removed and the other is partial Nephrectomy where diseased tissue or a certain part of the kidney is removed which comes under treatment process. Basically, Nephrectomy is being performed to treat kidney cancer or it is performed to remove a noncancerous tumor during urological surgery. The rise in demand for the Nephrectomy market is increasing rapidly due to the prevalence of kidney cancer and kidney-related diseases. The increased number of laparoscopic Nephrectomy procedures and the rising awareness among the individual about the kidney transplant. All these factors are predicted to boost the growth of the Nephrectomy market.

This report contains all the information on the Nephrectomy market research and the market strengths. The report also contains the culmination of dynamics, segmentation, key players, regional analysis, and other important factors. And a detailed analysis of the global market analysis and forecast to 2025 is also included in the report.

Covid 19 Analysis
The outbreak of the global pandemic has left a high impact on the Nephrectomy market, due to the lockdown phase, several surgeries got postponed and the supply chain of the necessary types of equipment and organs has got disrupted due to the restriction on transportation.  The shift of demand for treating coronavirus affected patients first has decreases the demand for Nephrectomy which can be considered as the major drawback for the Nephrectomy market.

The therapeutic procedures and the innovative diagnosis is likely to boost the growth opportunities for the major key players in the global Nephrectomy Industry, which ultimately promotes growth during the forecast period across the globe. According to the reports of Organ Donation and Transplantation, about 21,167 kidneys transplant took place in the year 2018 in the United States. Therefore, the rise in demand for the transplantation of the organs is adding fuel to the growth of the Nephrectomy market across the globe.

The key players of the Nephrectomy Market are focused on reducing the high cost involves in the surgical procedure which is a major challenge for the players in the market and it is likely to hamper the growth of the Nephrectomy Industry.

According to the reports of the National Kidney Foundation, Inc. the chronic kidney disease (CKD) is the major cause of increasing date rates in the united states and about 75% of kidney failures around the globe are due to high blood pressure and diabetes between 2014 and 2016. On the basis of reports from the World Health Organization 2018 fact sheet, near about 422 million people around the globe were reported to have diabetics in the year 2014. The rising prevalence of diabetes is the major cause of kidney problems and, hence driving the market.

Moreover, the rising demand for a kidney transplant is likely to boost the nephrectomy market growth. According to the reports based on US government Information on Organ Donation and Transplantation, about 31,167 kidney transplants took place in the US in the year 2018. Therefore, the rising demand for the transplantation of organs is adding fuel to the worldwide growth of the nephrectomy industry.

On the basis of indication, the global market is segmented into kidney cancer and other kidney diseases. The other kidney cancer segment is predicted to register the maximum growth at a CAGR of 5.01% during the forecast period. Based on end-user, the global nephrectomy industry has been segmented into hospitals & clinics, surgical centers, and others. The hospitals & clinic segment accounts for the maximum nephrectomy industry share of 1% in the year 2018.

The market is segmented on the basis of the procedure, indication, end-user, and region. The nephrectomy market is expected to witness decent growth during the forecast period.

Based on the propulsion types, the market is segmented into hospitals & clinics, surgical centers, and others.

According to the latest report, on the basis of region, the nephrectomy market has been segmented into the Americas, Europe, Asia Pacific, Rest of the world (RoW). America is likely to dominate the global nephrectomy industry due to the rising prevalence of kidney cancer in this region and along with that, the development in diagnostics and high prevalence of chronic kidney diseases would further boost the growth of the market in this region.

Additionally, according to the reports based on the American cancer society, about 73,820 new cased kidney cancer was estimated to accrue in the year 2019, 44,120 cases of men and 19,700 cases in women. Based on recent reports, kidney cancer is included in the list of top ten common cancers which is found in both men and women. Therefore, the global nephrectomy is predicted to grow in the Americas.

The report comprises the major key players of the nephrectomy market report across the globe. The shares of the market are highly effervescing with the huge numbers of players operating in the market. The key players are focused on collaborating with the key manufacturers who are willing to launch highly advanced technology in nephrectomy.

The Americas accounts for the largest share in the global Market.

At what CAGR is the nephrectomy market projected to grow in the forecast period (2022-2030)?

Nephrectomy market is projected grow at approximately 4.20% CAGR during the assessment period (2022-2030).

What was the value of the nephrectomy market in 2030?

The valuation of the nephrectomy market had reached USD 5264.81 Million in 2030.

Which is the major segment in the nephrectomy market?

The corticosteroid lotions segment by treatment type holds the majority shares in the nephrectomy market.

Which region holds the largest share in the nephrectomy market?

North America holds the largest share in the nephrectomy market, followed by Europe and the Asia Pacific, respectively.

Who are the top players in the nephrectomy market?

Which region holds the latest share in the Nephrectomy Market?

North America holds the largest share in the Nephrectomy Market, which is followed by Europe and the Asia Pacific respectively.