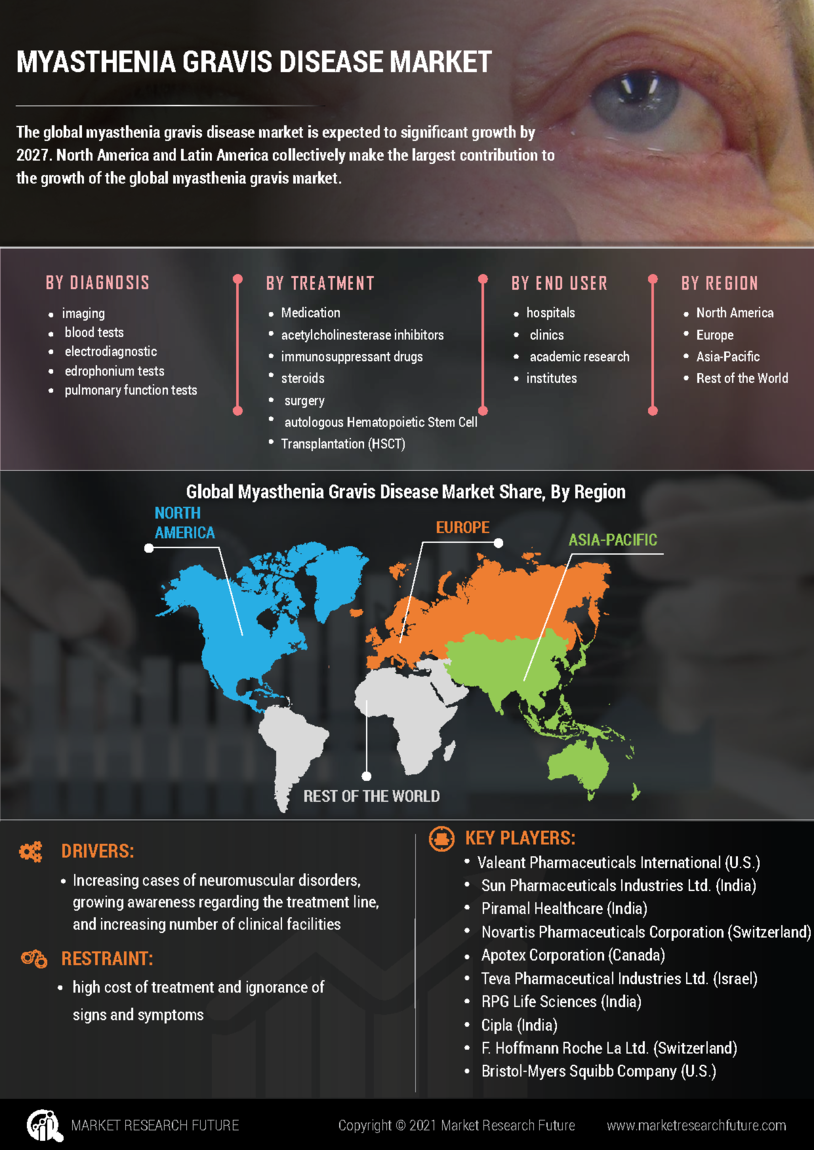 Myasthenia Gravis Disease Market is expected to register a CAGR of 7.70% with USD 1.9 Billion by 2030

The Myasthenia Gravis Disease Market is projected to reach USD 1.9 Billion by 2030 at 7.70% CAGR during the forecast period 2022-2030. This acute syndrome consists of sudden slowing down of heart rate or causes blockage in blood supply to the heart muscles. This acute coronary syndrome is also called a myocardial infarction. Some of the symptoms which are caused by the acute coronary syndrome are indigestion, dyspnea, diaphoresis and fatigue. As per the Centre for Disease Control and Prevention in 2017, the majority of 36,000 people died due to this syndrome in the region of the United States in 2015. As per the World Health Organisation, people above 65 years of age rise up the market demand where it has been found that due to this reason they occupy a USD 524 million in 2010 to about USD 1.5 million in 2050.  As per the research work published in the Brazilian Journal of Cardiovascular Surgery, the expenditure for the coronary artery bypass graft surgery, for each patient was calculated to cover a myasthenia gravis disease market value of USD 7992.55 in 2017.

The outbreak of the COVID brought a major effect on the myasthenia gravis disease market. COVID has hampered the growth and has hampered the supply chain and has caused a change in consumer behavior. The government has imposed shutdown and lockdown which led to the shutdown of manufacturing units. A change in the healthcare sector is marked because the medicals have most of the COVID-related patients. During this period, the doctors severely focused on the treatment of COVID patients, and the myasthenia gravis patients were not given the required treatment.

By technology- technology led to the invention of innovative drugs while technology led to the discovery of even certain inhibitors like cholinesterase and immunosuppressive drugs. These inhibitors provide mild treatment to muscles and nerves. Moreover, it has been found that cholinesterase inhibits the breakdown of chemical acetylcholine for which the muscles can contract more easily and become stronger. The drugs so invented keep your immune system active. These drugs prevent the body from being infected by harmful antibodies.

Some of the regions of the United States occupy the largest portion of the myasthenia gravis disease market. This region owes to the increase in the prevalence of coronary heart disease and also due to the presence of well-established healthcare units within the given region. Moreover, due to the rise in expenses and the presence of some of the key players propels up the market growth in this region. Some of the European regions cover a second-most advanced treatment market where there is a rise in the availability of funds for research processes and fact for the population. Here the government has also invested much more money to construct a huge healthcare unit. As per the Heart of United Kingdom, 4 lakhs hospital admission have taken place. The rise in growth of the geriatric population suffering from coronary heart disease and also suffering from obesity enhances the market scenario for expansion of the myasthenia gravis market. Asia-Pacific is expected to cover a major portion of myasthenia Gravis’s market share. It also covers some of the rising economic conditions in the regions of India, China, Australia, and many more regions. A huge rise in population with the rise in healthcare expenses along with the rapid growth in healthcare units steers up the market and business size. The Middle East and some of the African regions show exponential growth in the acute coronary market. This region occupies less expenditure and the strict rules and policies are taken forward to bring steady growth especially in the African region. In some of the Middle East regions, due to the growth in the healthcare sector and expenditure, the Middle East region covers a major myasthenia gravis disease market growth and high rise in expansion.

The myasthenia gravis disease market report gives insights and claims data about the new market trends which helps the key players to understand better the new and current treatment practices regarding the myasthenia gravis market share and defines the market niche of the developing countries. The report also shows the novel therapies discovered by the market landscape. The myasthenia gravis disease market report focuses on the symptomatic treatment carried out with muscle weakness and fatigue. The forecast suggests that soon this market is going to see a huge acceleration in the sales.