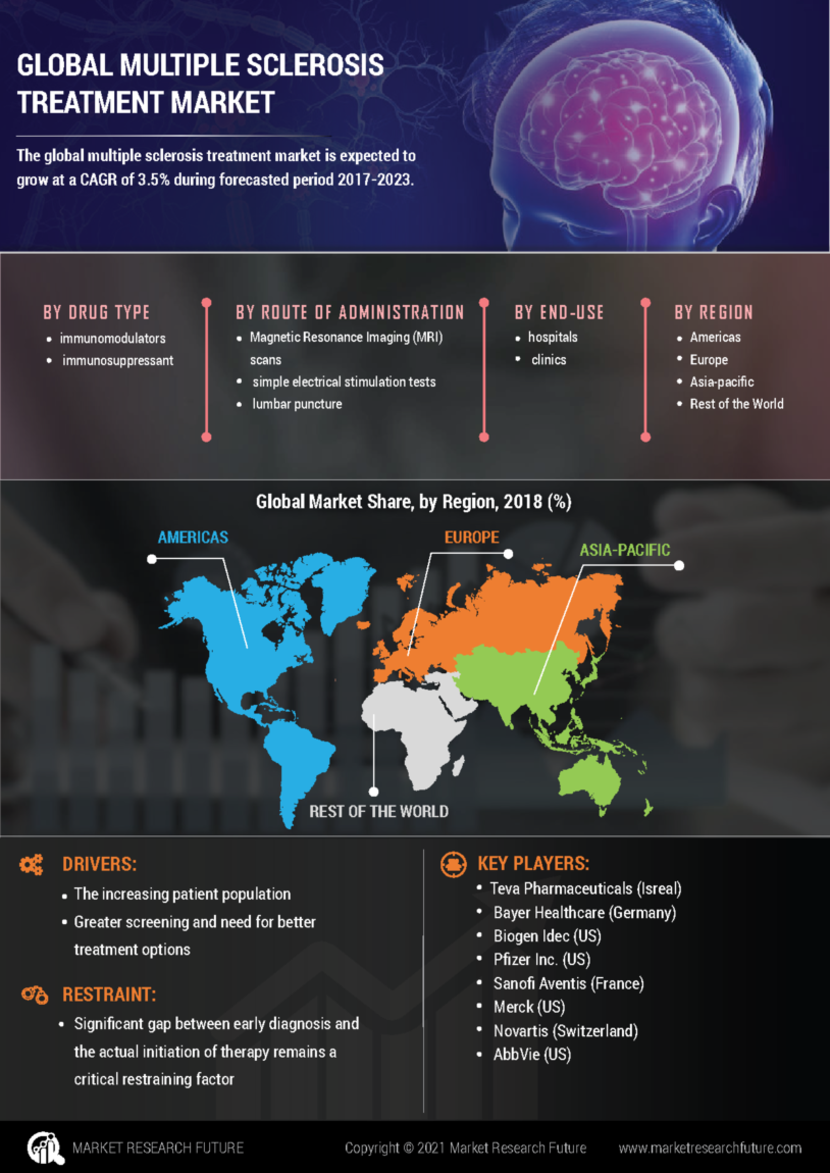 The multiple sclerosis treatment market is expected to grow at a CAGR of 3.5% during forecasted period 2017-2023. Multiple sclerosis is a chronic, inflammatory, autoimmune disease that affects the central nervous system, specifically the communication between the brain and other parts of the body. In particular Multiple sclerosis (MS) is a demyelinating disease in which insulating covers of nerve cells in the brain and spinal cord are damaged. Normally, there is no cure to MS, typically treatment focusses on speeding recovery from damages slowing the progression of diseases and managing MS symptoms.

Symptoms of MS vary widely and depend on the amount of nerve damage and the type and location of the nerves affected.

The symptoms of MS are numbness or weakness of limbs mostly affecting one side of the body, partial or complete loss of vision, double vision, electric-shock sensations with certain neck movements, tremor, and lack of coordination or unsteady gait, slurred speech, fatigue, dizziness, problems with bowel and bladder function, and others. Severe MS can affect the ability to walk independently or result in complete disability. The major causes of MS are walking and coordination problem, muscle weakness, fatigue, vision problems but the effects of MS differ from patient to patient.

The increasing patient population, greater screening and need for better treatment options are expected to be the major factors for the growth of the multiple sclerosis treatment market during forecasted period. In aging population is more susceptible to the disease.

Nevertheless, the significant gap between early diagnosis and the actual initiation of therapy remains a critical restraining factor to market growth. The lack of cure and effective treatment is a major drawback of the current treatment. Advent of a new drug with even partial cure rates are likely to be welcomed by the market of multiple sclerosis treatment is segmented into with a minimum cost and marketing efforts. Thus, research and development strategy is expected to yield the highest benefit with huge gains and benefits for the first comer.

The multiple sclerosis treatment market is segmented on the basis of drug type, into immunomodulators, immunosuppressant, and other.

On the basis of the route of administration, the market of multiple sclerosis treatment is segmented into injectable, oral, and other.

On the basis of the diagnosis, the market of multiple sclerosis treatment is segmented into Magnetic Resonance Imaging (MRI) scans, simple electrical stimulation tests, and lumbar puncture and other

On the basis of end-users, the market of multiple sclerosis treatment is segmented into segmented as hospitals, clinics, and others. 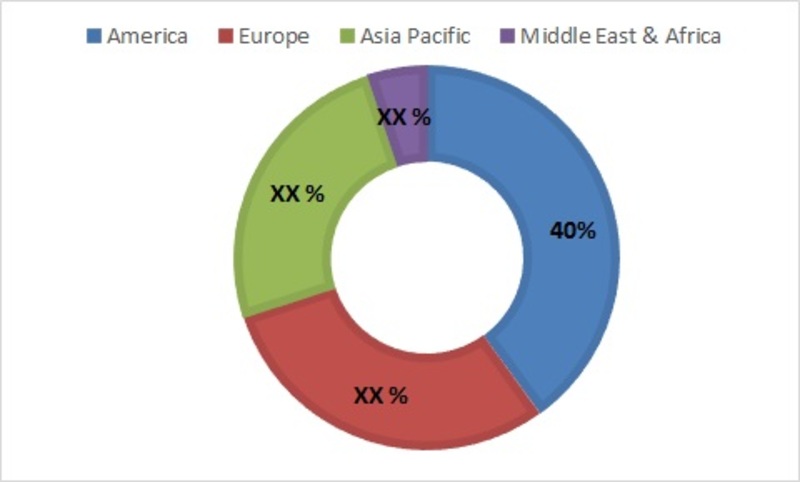 On a regional basis, the multiple sclerosis treatment market is segmented into America, Europe, Asia Pacific, and the Middle East & Africa. The U.S. is dominating the market owing to huge development in the medical sector, and increased research institutes for better treatment of diseases. Additionally, the greater number of hospitalization procedures due to greater healthcare penetration in the U.S. and Canada drives the multiple sclerosis market. The high concentration of the major hospitals in the developed countries of this region coupled with good reimbursement rates is adding fuel to the market growth of multiple sclerosis treatment. The consolidation of large healthcare players in the U.S. also causes the growth in the market due to the increasing buying power of the healthcare players, which results in economies of scale.

Europe is the second-largest multiple sclerosis treatment market in the world due to the growing healthcare industry and healthcare penetration. The European market growth is led by countries such as Germany and France. Germany is expected to be the fastest-growing market over the assessment period due to its large pharmaceutical industry. Europe is the second-largest market for multiple sclerosis followed by the Asia Pacific. Europe has always invested in advanced technology for better treatment solutions.

Gulf nations such as Saudi Arabia and the UAE are estimated to drive the Middle East & African market. Other Middle East nations to watch out for are Kuwait, Jordan, Egypt, and Iran. The African region is expected to witness a poor growth owing to poor economic and political conditions, and poor healthcare development. Other regions are expected to be laggards due to poor social development and tribal identities such as sub-Saharan Africa. Due to a lack of knowledge in the medical sector, less development in medical facilities in the Middle East & Africa will have limited growth in the market.

At what CAGR is the global multiple sclerosis treatment market projected to grow in the forecast period (2017-2023)?

multiple sclerosis treatment market is projected to grow at approximately 3.5% CAGR during the assessment period (2017-2023).

What are the major tailwinds pushing the growth of the global multiple sclerosis treatment market?

What are the key growth impeders of the global multiple sclerosis treatment market?

significant gap between early diagnosis and actual initiation of therapy and the lack of awareness about the conditions are major growth impeders for the global multiple sclerosis treatment market.

Which region holds the largest share in the global multiple sclerosis treatment market?

Who are the top players in the global multiple sclerosis treatment market?

Teva Pharmaceuticals (Israel), Biogen Idec (US), Bayer Healthcare (Germany), Pfizer Inc. (US), Merck (US), Sanofi Aventis (France), Novartis (Switzerland), and AbbVie (US), are some of the top players operating in the global multiple sclerosis treatment market.