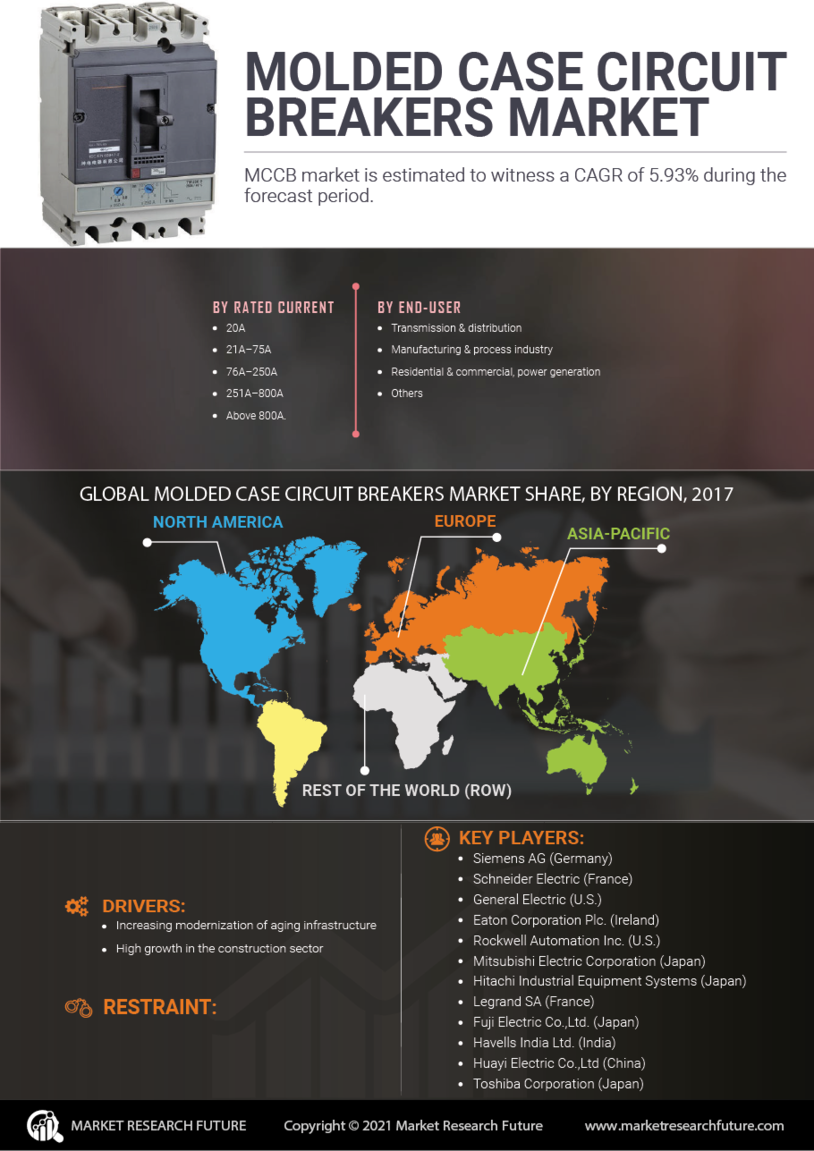 MCCB market is estimated to witness a USD 7.56 Billion and  CAGR of 5.93% during the forecast period.

Geographically, the global MCCB market has been segmented into four major regions, such as North America, Europe, Asia Pacific, and Rest of the World. The Asia Pacific region has accounted for the biggest market share in 2019 and is projected to grow at the highest CAGR throughout the forecast period. High growth in the construction sector is the major factor driving the growth of the market. The rising demand for modernizing the existing electricity infrastructure to serve the increasing demand for electricity is driving the growth of the market during the forecast period. High growth in population and advancement in lifestyle of people is leading to an increase in the consumption of energy. Asia Pacific has emerged as the largest consumer of electricity across the world. This has a positive effect on the growth of the market. China, Japan, South Korea, and India are the important regions in Asia Pacific. China has the world’s largest market for power transmission & distribution. According to IEA, World Energy Investment Outlook, China is spending around USD 83 billion on their transmission & distribution network.

North America is expected to be the second-largest region for MCCB market. Stringent compliance requirements on electrical safety is the factor driving the growth of the market in this region. Additionally, high investment in transmission & distribution network provides a wide scope for the usage of electrical components in this region. The U.S. is an important market in the global as well as North American region.

Europe is another major region for the MCCB market. The increasing number of cross border interconnections will drive the growth of the Transmission and Distribution (T&D) equipment industry in Europe. Europe is developing an interconnected grid that can transfer electricity between countries, such as the U.K, Poland, Germany, France, and Sweden. Improvement of grid reliability and combining reserves and reduction in the investments in power-generating capacity are some of the advantages of such interconnected systems. Moreover, high investment in the renewable energy sector is fuelling the global market growth. To decrease the dependence on conventional fossil fuels, several countries are focusing towards renewable energy power generation. 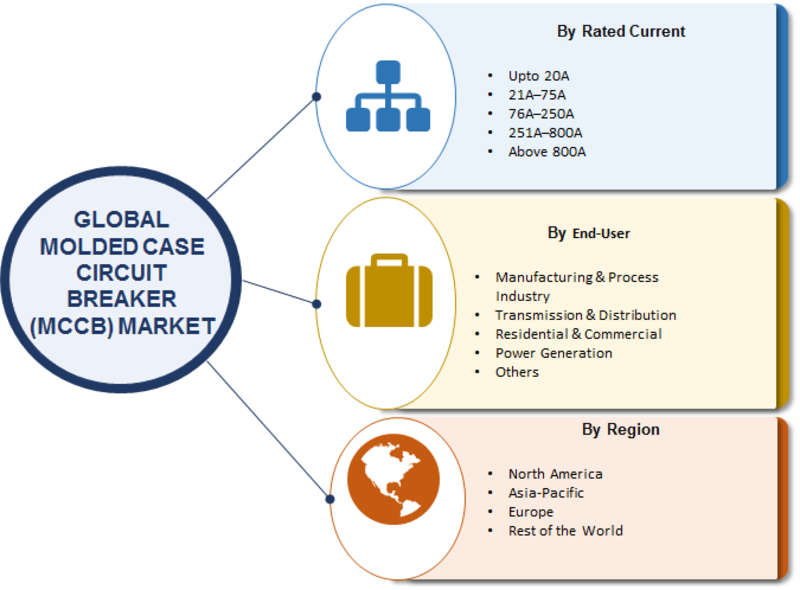 For the purpose of this study, the global molded case circuit breakers market has been divided into two segments, namely rated current and end-user. On the basis of rated current, the market has been segmented into up to 20A, 21A–75A, 76A–250A, 251A–800A, and above 800A. In 2018, 76A–250A dominated the rated current segment of the MCCB market. These MCCBs are being mostly used in infrastructure sector, especially residential and commercial. The growing infrastructure sector in emerging economies is expected to drive the market for 76A–250A sub-segment.

On the basis of end-user, the global molded case circuit breakers market has been divided into transmission & distribution, manufacturing & process industry, residential & commercial, power generation, and others. Transmission & distribution dominates the end-user segment of the MCCB market and is expected to grow at the fastest rate during the forecast period. Increasing modernization of aging infrastructure is a major factor driving the growth of the market.

Circuit breakers are the most critical components of a whole electrical circuit system. These are important for the prevention of electronic devices and loads from short circuits or overloads. Molded Case Circuit Breaker (MCCB) is a miniature circuit breaker primarily used to protect an electrical circuit from short circuits and securely connect and disconnect loads from the electrical source. MCCB commonly works based on two elements i.e. thermal element for overcurrent and magnetic element for short circuit release.

The report for Global Molded Case Circuit Breakers (MCCB) Market of Market Research Future comprises extensive primary research along with the detailed analysis of qualitative as well as quantitative aspects by various industry experts, key opinion leaders to gain the deeper insight of the market and industry performance. The report gives the clear picture of current market scenario which includes historical and projected market size in terms of value and volume, technological advancement, macro economical and governing factors in the market. The report provides details information and strategies of the top key players in the industry. The report also gives a broad study of the different market segments and regions.

In the future, what CAGR is forecasted for the molded case circuit breakers market?

How is the performance of molded case circuit breakers market companies going to affect the market revenues?

A steadily rising income is expected to be seen in the market.

Who are the notable firms functioning in the molded case circuit breakers market?

What is the regional prediction for the molded case circuit breakers market?

The regional front runner in the market is the APAC region.

What are the factors inducing the growth in the molded case circuit breakers market?

The collective demand for updating the prevailing electricity infrastructure is estimated to benefit the global market.