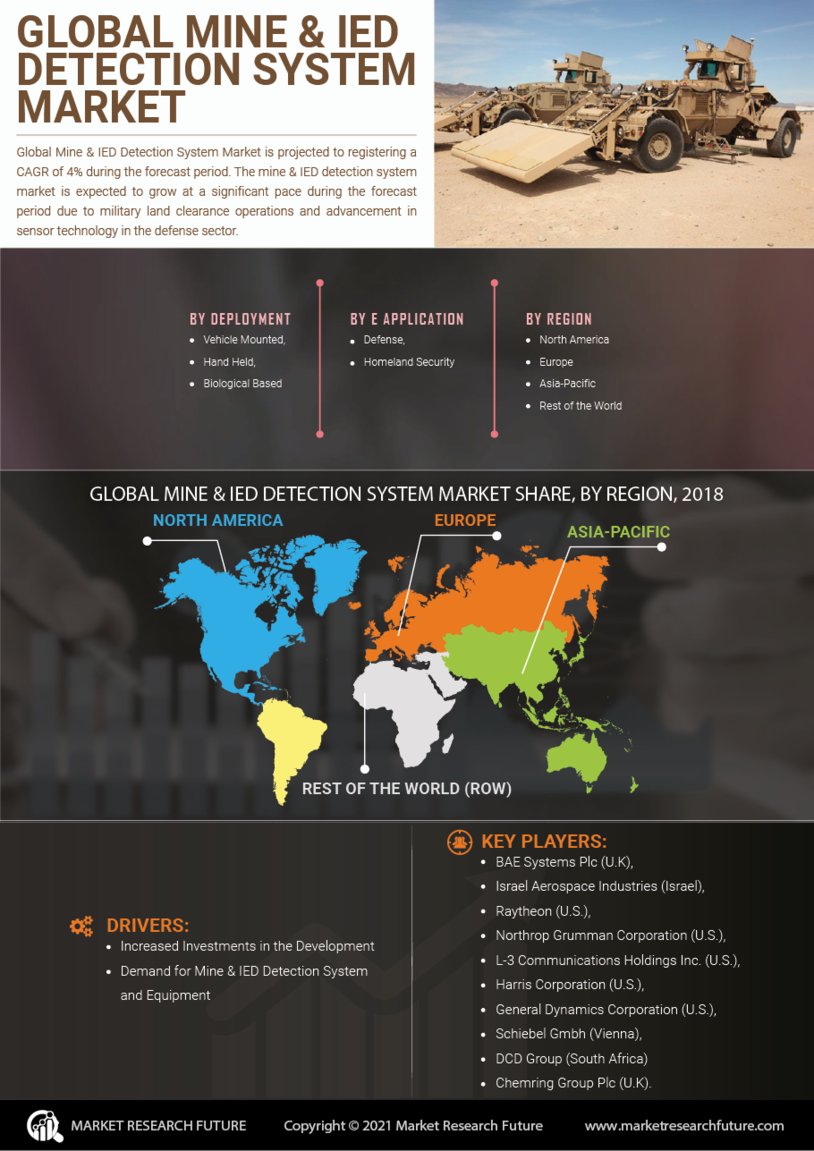 Meanwhile, in 2013, BAE Systems signed a contract with the U.S. Navy to provide critical mine detection sensor prototype, . However, high cost and declining defense expenses are restricting the usage of mine & IED detection system.

The mine & IED detection system market is segmented into deployment, application, detection capability, equipment, and region. On the basis of deployment, the market has been segmented into vehicle mounted, hand held, and biological based. Since the vehicle mounted detection system is much suited for high-threat search operation, the segment is expected to grow at the highest rate during the forecast period. For instance, in 2012, NIITEK signed a contract with the Australian Army to provide Husky Mounted Detection Systems (HMDS).

By application, the Mine & IED Detection System Market has been segmented into defense and homeland security. The defense sector in different countries is the major end-user of different types of mine and IED detection equipment and devices as they continuously face threats of IED blasts during cross-country operations.

By equipment, the Mine & IED Detection System Market has been segmented into sensor based, radar based, laser based, and others. The laser based segment of the market is expected to grow at the highest rate during the forecast period.

In terms of region, the market in North America is expected to witness the highest growth during the forecast period. The continuous demand for mine and IED detection system and equipment by the U.S. military to tackle conflicts in the Middle East and Asia-Pacific is the major reason for the high growth of this market. Similarly, in Asia-Pacific, the increased investments in the development of mine and IED detection equipment and devices are expected to contribute to the growth of the regional market. Therefore, the global mine & IED detection system market is estimated to witness a CAGR of approximately 4% during the forecast period from 2018 to 2023.

The report on the Mine & IED Detection System market by Market Research Future covers extensive primary research. This is accompanied by a detailed analysis of the qualitative and quantitative aspects by various industry experts and key opinion leaders to gain deeper insights into the market and industry performance. The report gives a clear picture of the current market scenario, which includes the historical and forecast market size, in terms of value and volume, and the technological, macroeconomic, and governing factors of the market. The report provides comprehensive information about the strategies of the top companies in the industry, along with a broad study of the different market segments and regions.

Mine &amp; IED detection system market is estimated to register a CAGR of 4% during the forecast ...