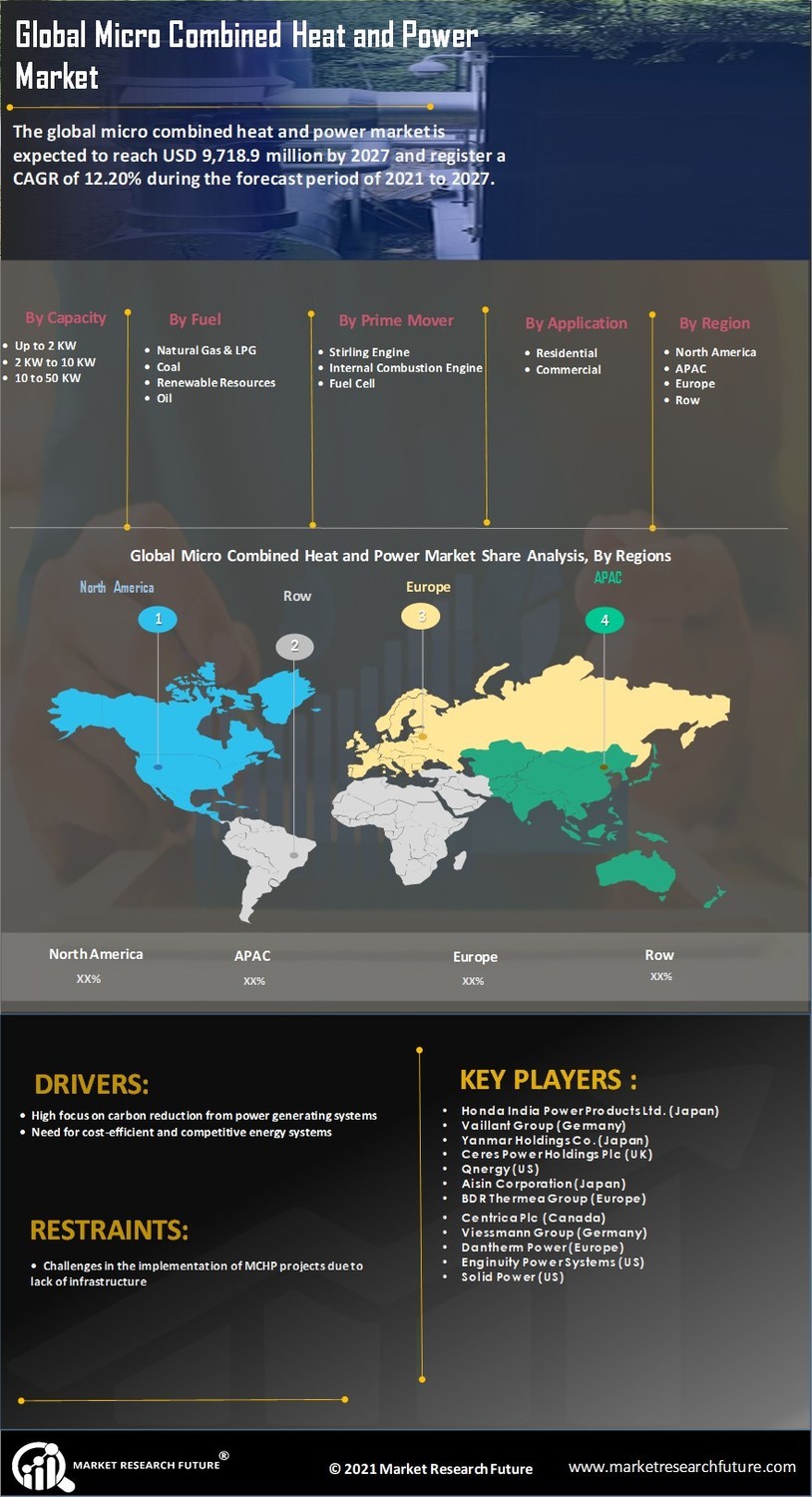 The electricity demand has decreased considerably due to the pandemic, leading to a decreased demand from the commercial sector. As most countries were under lockdown, economic activities have come to a standstill, and only essential industries are operating, leading to a substantial decline in demand for electricity. Many countries worldwide were under lockdown in April 2020, and according to statistical data from the International Energy Agency (IEA), countries in full lockdown saw an average energy demand decline of 25%, while countries in partial lockdown witnessed an energy demand decline of 18%. The preliminary analysis of statistical data displays an increase in the share of renewable energy in the global energy mix. In contrast, the demand for electricity sources such as gas, coal, and nuclear has declined.

However, many countries have reopened part of their economies in the Q3-Q4 of FY2020, which is likely to positively impact the global energy & power industry.


MCHP systems are an integral part of energy systems and microgrids. An MCHP system improves energy efficiency, facilitates the integration of renewable energy sources, reduces carbon emissions, lowers operating costs, and improves the reliability of critical infrastructure and the electric power system. Moreover, by generating heat and power simultaneously, MCHP can reduce carbon emissions by up to 30% compared to the separate means of conventional generation, which deploys boilers and power stations. For instance, as per Cogen Europe, MCHP, as an integral part of the entire CHP system, is likely to achieve carbon neutrality in Europe by 2050. Moreover, focusing on cogeneration for thermally generated heat and power in all sectors will maximize energy efficiency and integrate the European energy system at the lowest cost. All these factors are likely to drive the global micro combined heat and power market.

Governing authorities across the world are focusing on introducing out several programs, policies, and incentives for the development of MCHP systems. MCHP systems offer several advantages over other power generation sources, such as thermal, nuclear, solar, and wind. MCHP systems play an important role in meeting the demands of the electric and thermal loads of consumers. According to the US DOE, the Office of Energy Efficiency & Renewable Energy (US) announced an investment of USD 10 million in research and development for MCHP systems to provide support to the electric grid in the US.

The up to 2 kW segment refers to MCHP plants that produce power below 2 KW. MCHP plants included in this segment have extensive applications in cogeneration. Some of the key MCHP technologies covered in this segment are reciprocating engines. Key players in the global micro combined heat and power market have developed an MCHP plant that can be powered by various types of fuels, such as natural gas and biomass.

The 2 KW–10 KW segment refers to the MCHP plants with capacities between 2 kW and 10 kW. These plants use various types of technologies, such as turbines, reciprocating fuel cells. MCHP plants included in this segment have applications in power generation, cogeneration, and trigeneration. For instance, in the US, the base electrical load for the average home is approximately 2 kW, while the peak electrical demand is slightly over 4 kW.

The 10 KW–50 KW segment refers to MCHP plants that produce power between 10 KW and 50 KW. MCHPs included in this segment have extensive applications in cogeneration. These MCHP plants are generally used for electric and heat generation in commercial and residential areas. The different types of MCHP technologies included in this segment are gas turbines, reciprocating engines, and steam turbines.

Natural gas is a naturally occurring fossil fuel found beneath the surface of the earth at varying depths. It primarily consists of methane with varying compositions of alkanes. The emissions produced from natural gas are lower as compared to other fossil fuels, including coal. Moreover, the rising environmental concerns over carbon emissions lead to the increasing adoption of natural gas as a fuel source to reduce the overall carbon footprint.

Coal is a combustible sedimentary rock that is usually brownish or black and contains high amounts of carbon and hydrocarbons. Different types of coal are classified based on the different levels of carbon, hydrogen, and oxygen in them. Coal as a fuel is the cheapest source of energy. It also provides a stable source of energy for power generation.

Renewable energy, often referred to as clean energy, comes from natural sources or processes that are constantly replenished. For example, sunlight or wind keep shining and blowing, even if their availability depends on time and weather. Renewable energy (including biofuels but excluding hydro) rose by 9.7%, slower than the 10-year average (13.4% p.a.), but the increment in energy terms (2.9 EJ) was similar to increases seen in 2017, 2018, and 2019.

A micro-CHP boiler typically uses mains gas or LPG, so they are not considered a renewable energy source. However, due to their efficiency and productivity, they can significantly lower carbon dioxide emissions and are widely considered to be the future of domestic carbon emission depletion. They may in the future be able to utilize bio-oils, fuel cells, or other renewable energy sources. However, at present, the technologies that are currently ready for market deployment have been developed to use mains natural gas.

A Stirling engine operates via external combustion, all its heat flows in and out through the engine wall. The engine encloses a fixed quantity of permanently gaseous fluid such as helium or air. This operates by expanding and contracting the hot and cold gas, driving the pistons creating a mechanical cycle. There are two pistons involved: a 'Displacer piston' and a 'Working piston'. Performance and reliability are generally higher than internal combustion engines.

Internal Combustion (IC) engines are similar to vehicle engines modified to run on natural gas or compression-ignition diesel. These systems offer a mid-range performance of 20-40% electrical efficiency, but 1kW domestic models can only operate at a fixed output rather than following the demand of the property. The heat produced is usually hot water rather than steam. They generally produce 1 to 2 units of heat for each unit of electricity, with the ratio of heat to power generally decreasing with size.

Fuel cells use the electrochemical process, which converts the chemical energy stored in a fuel cell into electricity and water. The technology involved in fuel cells is entirely different from the others as electricity is generated without fuel combustion. The efficiency of fuel cells in MCHP systems is generally more than 80%. Fuel cell MCHP systems offer better advantages in terms of less noise and emissions than the other types of technologies used in MCHP systems.

The residential segment includes infrastructure that is dependent on MCHP systems for electrical energy. Micro CHP for the residential is a relatively new technology. Until 2006, the economic viability of the available 'domestic' unit's payback period rendered the micro-CHP technology unfit for domestic use. The segment of micro combined heat and power market is further segmented into space heating/cooling, water heating, cooking, lighting, EV charging, and others. 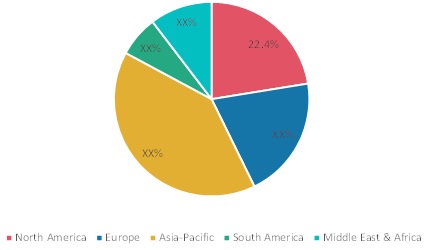 The next-generation power solution that is a small size cogeneration plant, is defined as micro combined heat and power (MCHP). They are used to generate and supply heat and electricity with a high degree of productivity and minimal carbon efficacy.

What are the MCHP (Micro Combined Heat and Power) market insights?

The worldwide MCPH market is expected to thrive at about 12.20% CAGR through the review period. It is because of the high rate of adoption MCPH to settle the surge in industrial and domestic heat and electricity requirements.

Which technologies are used in micro combined heat and power solutions?

What are MCHP applications?

MCHP are observed as an effective solution to the surging residential and non-residential thermal demands. Industrial heat power requirements are increasing. Meanwhile, the need to reduce carbon footprint is significant. Thus, MCPH are adopted across different sectors. In addition, residential applications of MCPH is also noted to increase due to the increase in the expansion of the global population base. These are identified as potential growth inducers of the MCPH market.

Who are global suppliers of MCHP?