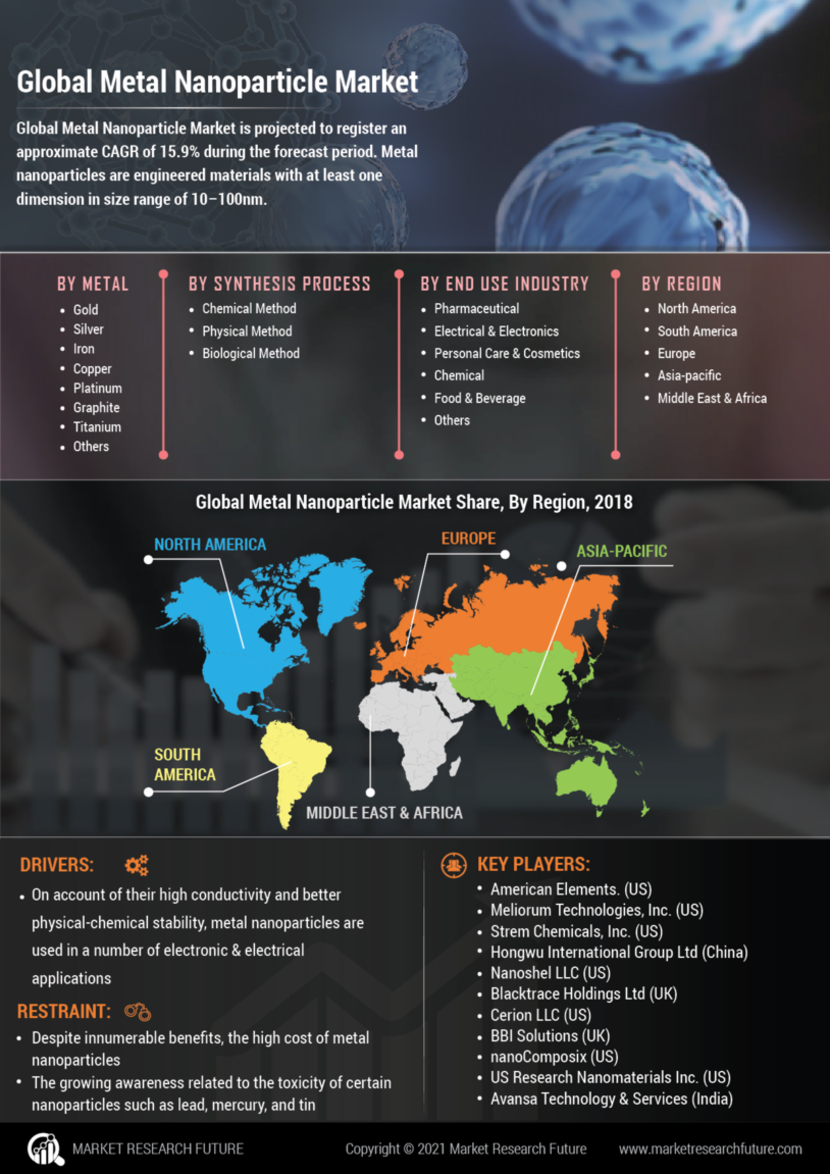 Global Metal Nanoparticle Market is projected to register an approximate CAGR of 15.9% during the forecast period. Metal nanoparticles are engineered materials with at least one dimension in size range of 10–100nm.These particles on account of their exceptional properties such as high aspect ratio and uniform size are used in a wide spectrum of applications such as catalysis, medical, and energy storage. For instance, cobalt nanoparticles are used as a catalyst in the oxidation reaction of cyclohexane to synthesize adipic acid, which is then used to produce nylon 6, 6 polymer. Various metal nanoparticles such as silver, titanium, gold, platinum, and copper have shown potential therapeutic effects. Thus, find a wide variety of applications in drug delivery, diagnosis, and other medical arenas. This is likely to drive the global market in the pharmaceutical sector. For instance, silver and gold nanoparticles are effective in inhibiting growth of gram-positive and gram-negative bacteria, thus are extensively used as a novel antibiotic agent. In addition, on account of their high conductivity and better physical-chemical stability, metal nanoparticles are used in a number of electronic & electrical applications such as solar cells, in film transistors, and supercapacitors, thereby fueling the market growth globally. Furthermore, the increasing use of metal nanoparticles in various industrial and domestic applications coupled with the rising advancements in nanotechnology is further creating lucrative opportunities for players operating in the global metal nanoparticles. However, despite innumerable benefits, the high cost of metal nanoparticles is likely to limit the growth worldwide. Also, the growing awareness related to the toxicity of certain nanoparticles such as lead, mercury, and tin among the consumers is further posing a threat to the global market growth.

Global Metal Nanoparticle has been analyzed for five major regions—North America, Latin America, Asia-Pacific, Europe, and the Middle East & Africa. The North American market dominated the global metal nanoparticle and accounted for the largest market share in 2018. This is due to the increased demand for the product in developed pharmaceutical industries in the region. The US, followed by Canada, is the leading country owing to the presence of major key players such as American Elements, Nanoshel, Cerion, Strem, and Meliorum in the region. Additionally, the increasing innovations for the development of novel metal nanoparticles for multifarious applications are driving the regional market growth. Moreover, rising installation of photovoltaic cells is further augmenting the growth of the regional market. According to the Solar Energy Industries Association (SEIA), in 2017 the US total installed PV capacity reached 51.5 GW and accounted for a market share of 12.7%. Asia-Pacific accounted for a substantial market share in 2018 and is expected to register the highest CAGR during the forecast period. The increasing demand for metal nanoparticles in expanding pharmaceutical and electronics industry in developing economies across the region is expected to drive the market growth. China is the leading country, followed by India and other South-East Asian countries on account of the growing medical and hospital industry in the region. For instance, in China, the consumer electronics segment was valued USD 128,240 million in 2019 and is expected to register a CAGR of 9.5% by 2025. This is likely to drive the demand for metal nanoparticles in the electronics & electrical industry. Europe is also expected to register significant growth during the forecast period due to the extensive use of metal nanoparticles such as in medical and cosmetic applications. Germany is the major contributor on account of well-established end-use industries. The global metal nanoparticle in Latin America and the Middle East & Africa are expected to show high growth during the forecast period owing to the rising industrialization in the region. Segmentation Market Research Future segments the global metal nanoparticle-based on metal, synthesis process, application, and region. Based on metal, the global market has been classified as gold, silver, iron, copper, platinum, graphite, titanium, and others. On the basis of synthesis process, the global market has been classified into chemical method, physical method, and biological method. Based on application, the global metal nanoparticle has been classified as pharmaceutical, electrical & electronics, personal care & cosmetics, chemical, food & beverage, and others. By region, the market has been categorized as North America, Europe, Asia-Pacific, Latin America, and the Middle East & Africa.

Metal Nanoparticles Market Is Set To Grow At A Robust Cagr Owing To Increasing Demand In The Heal...