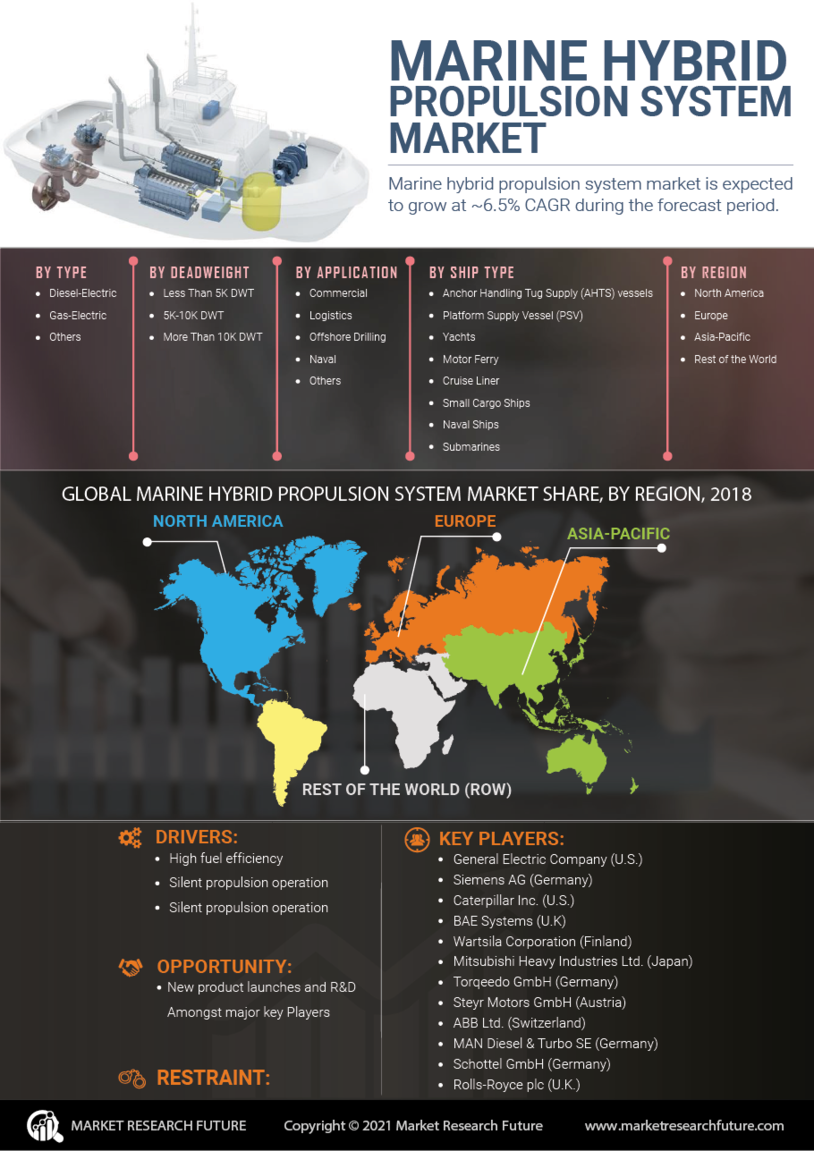 Global marine hybrid propulsion system market has witnessed gradual growth in recent years, and is expected to witness steady growth in the forecast period. A propulsion system is a mechanism that produces thrust to push an object forward. The system usually consists of a source that produces mechanical power and a propeller that converts this power into propulsive force.

The hybrid drive technology is not only interesting for drive systems for electric vehicles, but also for marine sector. In this sector there is scope to replace the proven diesel mechanical drives with new drive concepts. This is triggered by the price of fossil fuels and stringent emission standards in the ocean level. A hybrid drive concept offers the possibility by adjusting power and speed to achieve lower specific fuel consumption. This can have a big impact, especially on the partial load range.

Global marine hybrid propulsion system market has been segmented based on type, deadweight, ship type and application and region. Based on type, the market has been segmented as diesel-electric, gas-electric, and others. Among these the diesel-electric type system, is projected to dominate the marine hybrid propulsion system market through 2023. The dominant position of this segment can be attributed to the highly fuel efficient and silent propulsion operation. Also, it is cost-effective to be installed in the new vessel. Based on the deadweight, the market has been segmented into Less Than 5K DWT, 5K-10K DWT and More Than 10K DWT. 5K-10K DWT dominated the market in 2016 and is projected to be the fastest-growing deadweight segment for a ship. 5K-10K DWT is the ideal dead weight tonnage for the ship, in which marine hybrid propulsion system can be installed, as this range provides exact load variation required for the hybrid system, thus performing high efficient propulsion operation.

The marine hybrid propulsion system industry is expected to have huge number of advancements over the forecast period, owing to continuous developments in marine industry coupled with growing ship owner preferences for high fuel efficient features. The market is also expected to have high expansion activities by multinationals and well-established companies.

What CAGR can the market expect to achieve during the review period?

The market can expand at a stable rate of 6.5% during the evaluation timeline.

Who are the leading companies in the global market, as per the report?

Why is APAC expected to emerge as one of the strongest markets?

APAC expected to emerge as one of the strongest markets on account of the rising deployment of advanced marine hybrid propulsion systems in the increasing number of ships being built at present in the region.

Why is the diesel-electric type system dominating the market?

The diesel-electric type system us dominating the market owing to its high fuel efficiency and the silent propulsion operation, in addition to cost-effective properties.