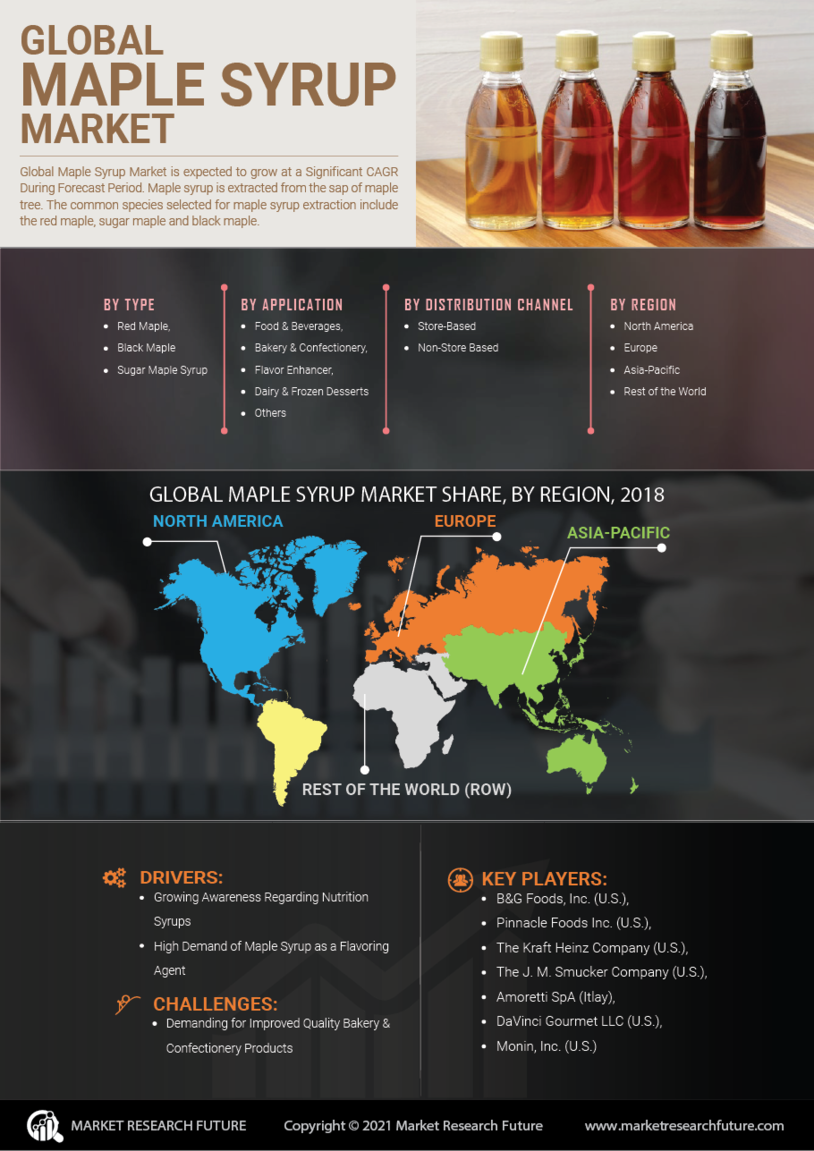 The overall Maple Syrup Market outlook is good. The CAGR for the maple syrup market is 6.2%. This is expected to continue until 2023. Maple syrup is processed sap that is extracted from the maple tree. Maple syrup manufacturers extract sap from many different species of maple trees. However, the most favorite species to extract maple sap from seems to be the red sugar maple tree. The black maple tree is also another commonly used species.

Maple Syrup Market is used to top many foods to make these otherwise savory foods taste sweeter. Some of these foods include baked goods like waffles, pancakes, and French toast. More and more manufacturers of baked goods in a variety of industries - from cereal to dairy are using maple syrup when manufacturing and processing their food products.

COVID-19 was a dangerous virus that plagued the world last year during the great pandemic. It made many people very ill, and this was why national governments around the world instituted mandatory and temporary lockdowns and quarantines. This was in an attempt to try to contain the spread of the virus. It has limited success.

Many industries were adversely affected because they were either forced to shut down or at least dramatically slow production down temporarily. The Maple Syrup Market was no exception. COVID-19 made it hard for maple syrup manufacturers to obtain the sap that they needed to make their finished goods. This negatively affected the short-term maple syrup market growth.

The Maple Syrup Market remains highly competitive. There are three ways that companies in this industry can survive. They can invest heavily in research and development to formulate the new technologies that will allow them to develop methods of harvesting better quality maple sap in higher quantities.

Companies can also enter into strategic partnerships with other companies. Once they have pooled their collective resources, the participating companies often have no trouble entering into new markets or retaining and strengthening their current positions in existing market

Mergers and acquisitions do the same for the resulting company that strategic partnerships do.


Pinnacle Industries is a major American company that has stayed competitive by investing heavily in research and development to pioneer new technologies that would make extracting better quality and more sap easier. It also developed better methods of processing the sap to retain nutrition and flavor

Maple Syrup Market is full of minerals, vitamins, and nutrients that the body needs to stay healthy. More people around the world have become aware of the nutritional power of maple and similar syrups in recent years, The same is true of maple products like maple cream which can be made by processing maple syrup further.

As the middle classes explode in developing nations more and more people there and in developed nations want to eat baked goods that are delicious and more nutritious. Maple Syrup Market and its related by-products are capable of providing these types of quality baked goods.

There are many opportunities for maple syrup manufacturers as maple syrup market growth continues to explode. These manufacturers recognize and are seizing on these opportunities by investing heavily in research and development to develop the types of technologies that will allow them to make higher quality maple syrup that is more nutritious, tastes better, and has a better texture. They are also fast at work in terms of trying to develop the technologies that will lead to a greater variety of more delicious flavors of maple syrup and related by-products.

Maple syrup is not easy to extract. Also, it can be extracted in large quantities and in high quality only during the fall months and that too in nations with a temperate climate. These two factors are set to limit growth for the maple syrup market in at least the short term.

Perhaps the biggest challenge that maple syrup manufacturers face lies in continuing to develop superior maple syrup products in a wider variety of flavors and textures while keeping the price point in the affordable range for the end-consumer.

Pinnacle Foods is a major American player in the maple syrup market. It has managed to retain its superior market position by investing heavily in research and development. This has allowed it to develop a new generation of technologies that promise to improve the quality and varieties of maple syrup products and by-products that are currently on the market. It also has hinted towards introducing new and innovative products with diverse applications.

The maple syrup market can be segmented into the following groups based on type:


The sugar maple segment commandeers the majority of the maple syrup market share. The reason for this is because maple syrup is used as a sweetener to enhance the flavor of many goods, especially baked ones.

There are four different grades for maple syrup and its related by-products. These are:

Grade A is the most popular and preferred grade because it’s the purest type.

There are many different industries that use maple syrup and its by-products. These are:


The bakery and confectionary segment commands the greatest maple syrup market share in this segment because many people like to put maple sugar granules on the tops of cakes, pies, muffins, and other baked goods.

There are two segments based on distribution channel:

In the North American region, Canada accounts for the lion’s share of demand. According to statistics submitted by the Federation of Quebec Maple Syrup Producers, 80% of the global demand for maple syrup products and by-products came from Canada. And that was in 2017. Given the fact that maple syrup and its related by-products have become much more popular since then, that number is likely to have increased dramatically since then.

Almost 90% of the Canadian demand for maple syrup came from one province - Quebec. What accounts for the immense popularity of maple syrup in Canada may be the fact that maple trees are found in abundance there given its pleasant and cooler temperate climate.

Canadian maple syrup is exceptionally sweet and rich in taste. This is the reason why many manufacturers around the world of various food products are viewing it as a viable and reasonable alternative to sugar as a sweetener. What is driving this decision even further is the fact that maple syrup is much more nutritious than sugar is - even unrefined sugar.

The United States also has a healthy and growing demand for maple syrup. What’s driving growth in this nation is the fact that maple syrup is used to enhance the flavor of and sweeten many foods. These include heated cereals, dry cereal, ice cream, savory meat products, fruit juices, baked beans, and donuts. There is also growing demand for using maple syrup on a variety of other baked goods.

Many people throughout the European Union want to consume only organic products. This is especially true in many of the economic heavyweights in Europe. Germany happens to be one of these nations. So is France. This is driving heavy demand for maple syrup and related by-products because maple syrup is one of the few food products that can be grown and harvested according to organic rules, regulations, and norms.

B&G Foods recalls some containers of dried garlic powder that also contained soy products that were not listed on the labeling.

At what CAGR is the maple syrup market projected to grow during the forecast period?

Which region is expected to dominate the maple syrup market?

North America is expected to dominate the maple syrup market.

Which application segment will lead the maple syrup market?

Bakery and confectionery will lead the maple syrup market.

Which grade segment will dominate the maple syrup market?

Grade A will dominate the maple syrup market.

Which factors may limit the maple syrup market growth?