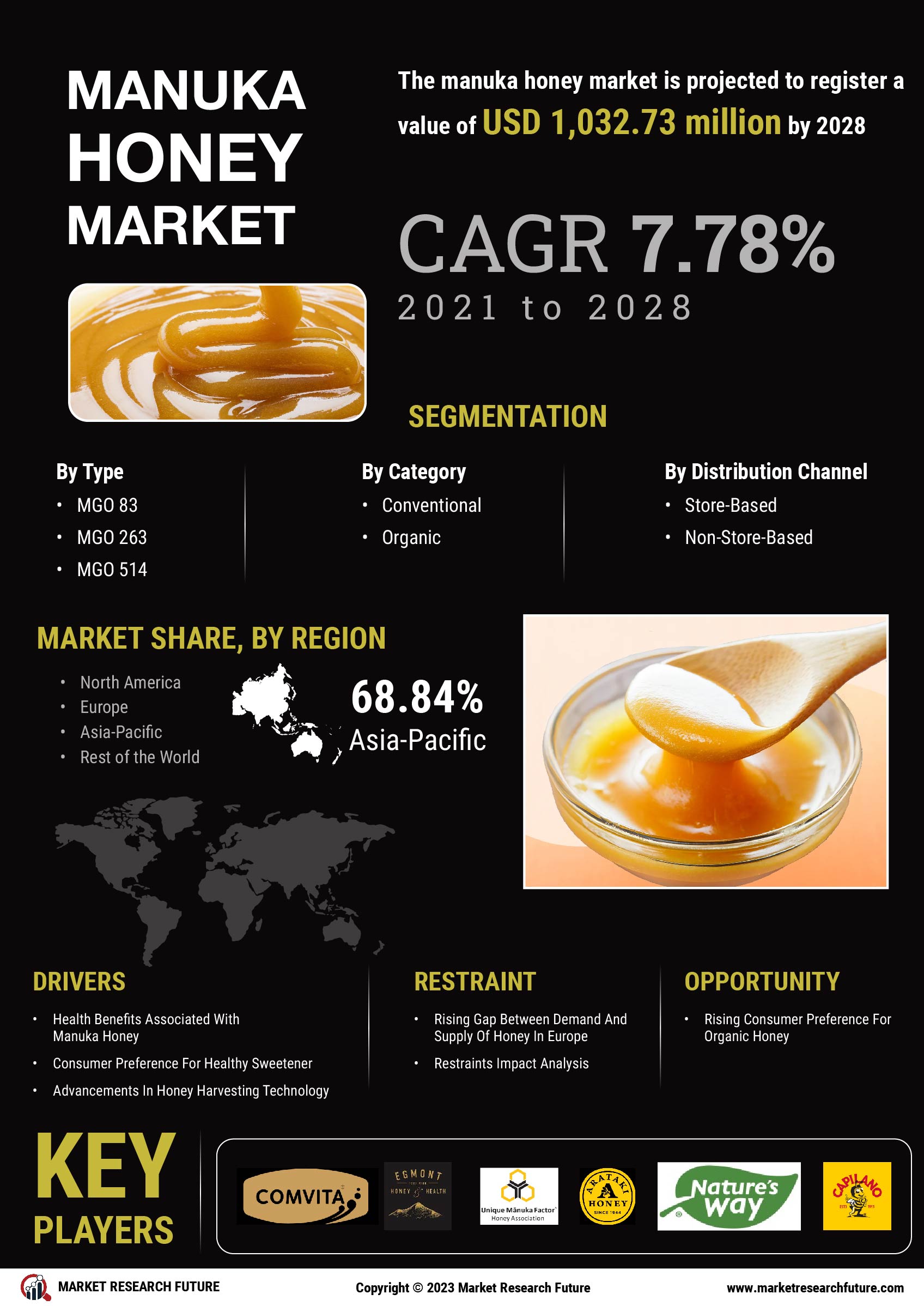 
The manuka honey market is projected to register a CAGR of 7.78% and reach a value of USD 1,032.73 million by 2028. Manuka honey is dark honey that offers a pool of biological properties owing to its antimicrobial and antioxidant capacities. It is derived from the Manuka tree, Leptospermum scoparium, of the Myrtaceae family, which grows as a shrub or a small tree throughout New Zealand and eastern Australia. The antimicrobial activity of Manuka honey is measured through the Unique Manuka Factor (UMF). The UMF grading number is based on the combined levels of three key signature markers, leptosperin, methylglyoxal, and DHA present in Manuka honey. Methylglyoxal (MGO) present in manuka honey is tolerant to light, heat, body fluids, and enzymatic activity. All honey has some anti-bacterial qualities, which is due to the formation of hydrogen peroxide in it. Hydrogen peroxide rapidly vanishes when subjected to body conditions, whereas methylglyoxal is stable, and therefore MGO manuka honey is superior to other types.COVID-19 Impact AnalysisGlobally, the sale of food and beverages has increased after COVID-19, as this pandemic has forced millions of people to stay at home. There is a high demand for manuka honey among consumers in the region. In this period, consumers are spending money on honey with medicinal properties such as manuka honey compared to traditional honey due to health consciousness. However, the outbreak of COVID-19 has hit the manuka honey market worldwide as mandatory closures of supermarkets and hypermarkets across regions and countries. The outbreak has lowered the production capacities of manuka honey. Since the outbreak, mandatory closures of manufacturing facilities due to COVID-19 have impacted the entire food & beverage industry.Manuka honey is produced from the nectar of the mānuka tree, which majorly grows in New Zealand and Southern Australia. New Zealand is the major manufacturer of manuka honey. Being the major manufacturer of manuka honey, the pandemic has affected the manufacturing and supply chain severely. Due to the import-export restrictions by various countries and transportation limitations, the sourcing and supplying of manuka honey were affected badly during the initial stage of COVID-19.

The global manuka honey market has witnessed a significant growth rate over the last few years and is projected to register a 7.78% CAGR during the forecast period. Health benefits associated with manuka honey are majorly driving the growth of the market. Growing preference for healthy sweeteners among consumers is further supporting the market growth. Also, advancements in honey production technology boost market growth. Moreover, rising consumer preference for organic products is expected to create new opportunities for the vendors active in the global manuka honey market. However, the growing gap between demand & supply of honey in the Europe market is restricting the growth of the market. Also, honey laundering practices impose a challenging situation for the market.


Manuka honey is highly valued for its antibacterial properties, as has been substantiated by scientific research. It helps in wound healing, improves metabolism, treats sore throat, and is also good for the skin. In 2007, manuka honey was approved by the US FDA as an option for wound treatment. Multiple studies have shown that manuka honey can enhance wound healing, amplify the regeneration of tissues, and even decrease pain in patients suffering from burns. Manuka honey also promotes oral health. Studies have shown manuka honey attacks harmful oral bacteria associated with plaque formation, gum inflammation, and tooth decay. Manuka honey’s potent antibacterial effects make it unlikely to contribute to cavities or tooth decay. Moreover, researchers have discovered that regularly consuming manuka honey may help decrease symptoms associated with irritable bowel syndrome (IBS), a common digestive disorder. Additionally, owing to its anti-inflammatory properties, manuka honey is said to decrease inflammation associated with acne. Thus, these health benefits associated with manuka honey and its rising awareness among the consumers drive the market growth.


The European Union is the world's second-biggest producer of honey after China. Every year, about 600,000 beekeepers and 17 million beehives produce about 250,000 tons of honey. However, the production does not cover the demand: About 200,000 tons of honey were imported into the EU in 2020, mainly from China, accounting for about 40% of EU imports. The production level of honey in Europe seemed to decrease rapidly. Several factors contribute to the overall decline of the European apiculture sector. Outbreaks of animal diseases, intensive agriculture, exposure to chemicals, habitat loss, and adverse climatic conditions are a threat to the productivity of beehives. The European Parliament is calling on the European Commission and EU countries to come up with new measures to protect bees and help beekeepers. Also, the European Union has proposed regulations against the use of certain pesticides. The European Union’s proposal targets pesticides used to treat plants and cereals that are attractive to bees and pollinators. The new regulation is expected to have a positive impact on bee health and bee populations in Europe. However, honey production is not likely to increase significantly. Also, large-scale honey production is becoming less profitable due to increasing labor costs and the fact that pollination receives priority over honey production. These factors also result in high prices of the product in the market. Thus, the growing gap between demand and supply of honey in Europe is expected to threaten the growth of the manuka honey market during the review period.


The consumers in developed economies are increasingly concerned about the impact of agricultural activities on the environment and are looking for products with less environmental impact. Consumer awareness is rising regarding the environmental and health impact of chemicals during food cultivation. Consumers are shifting toward organically procured honey due to the increasing awareness regarding the negative impact of chemicals on human health. The organic market in Europe and the US is increasingly becoming mainstream and is highly developed in Western European countries such as Germany, France, and the UK. According to MRFR analysis, the Europe organic products market was valued at USD 104.6 billion in 2020, registering a CAGR of approximately 7.5% from 2010 to 2020. There is a constant growth of organic bee products, and Germany is among the top importers of organic honey. Such promising growth statistics offer market players lucrative opportunities with the addition of organic manuka honey to their portfolios and/or expansion in the distribution of organic manuka honey.

Based on product type, the global manuka honey market has been segmented into MGO 83, MGO 263, MGO 514, MGO 829, and others. The others segment accounted for the largest market share in 2020, whereas the MGO 829 segment is expected to record the highest CAGR of 8.00% during the forecast period.

Based on category, the global manuka honey market has been segmented into conventional and organic. In terms of value, the conventional segment accounted for the largest market share in 2020 and is projected to register a decent CAGR of 7.70% during the forecast period. However, the organic segment is expected to register the highest CAGR of 8.27% during the forecast period. 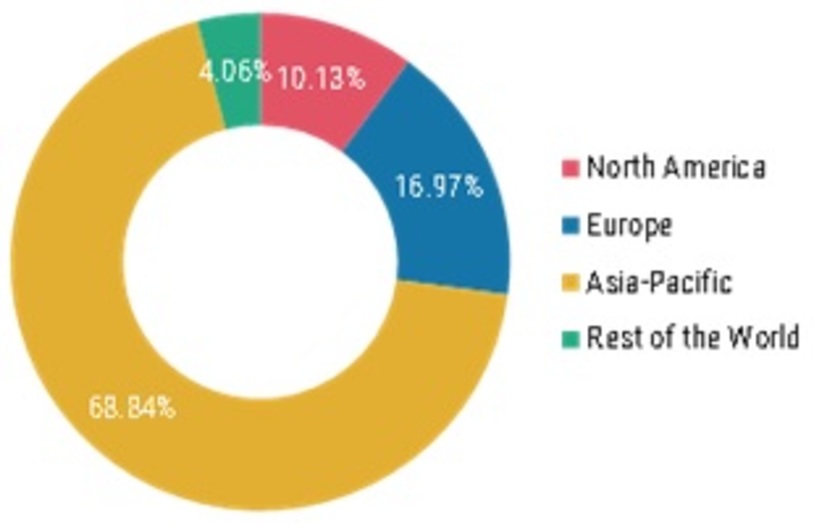 By region, the global manuka honey market has been divided into North America, Europe, Asia-Pacific, and the Rest of the World. Asia-Pacific accounted for the largest market share of 68.84% in 2020. Europe was the second-largest market in 2020 and is projected to exhibit a CAGR of 8.21% during the review period. The market in Europe is expected to register the highest CAGR of 8.21% during the forecast period.

Europe accounted for 16.97% of the global manuka honey market in 2020 and is projected to expand at a 8.21% CAGR during the forecast period. The UK and Germany were the key contributors to the growth of the European market in 2020. The market in Germany is projected to register the highest growth rate of 8.52% during the forecast period 2021 to 2028. The European countries includes several developed economies, such as France, Germany, Italy, and the United Kingdom.

At what CAGR is the manuka honey market projected to grow during the forecast period?

Who are the key players in global manuka honey market?

What are the key factors driving the market?

The global market is driving its market growth due to manuka honey's low-fat content, increased preference for honey instead of table sugar, and increasing adoption of natural and high nutritional products among health-conscious people.

Which factors may limit the manuka honey market growth?

What are the major applications of manuka honey?

Manuka honey is widely used in personal care products, medicinal purpose, bakery and confectionery, and others.

Which region is expected to lead the manuka honey market?

Asia Pacific is expected to lead the manuka honey market.

The global manuka honey market is projected to record a CAGR of 7.78% during the forecast period ...