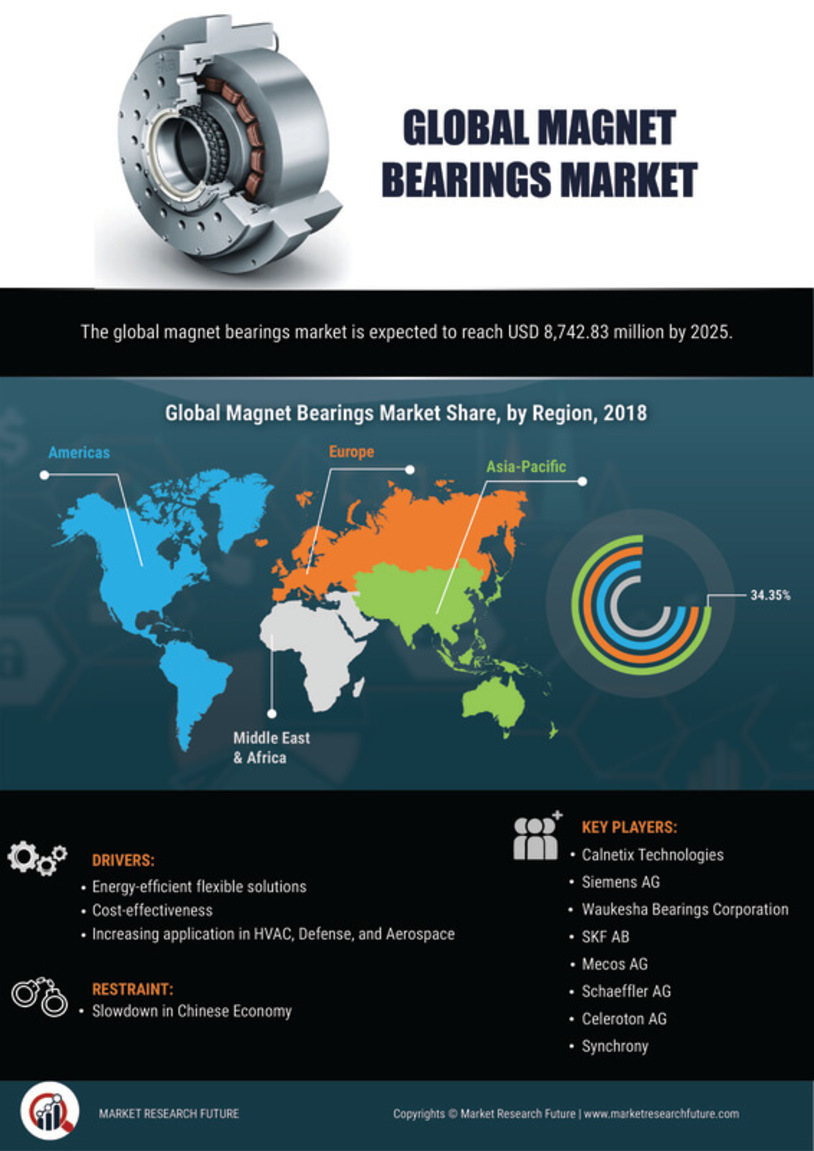 The Magnet Bearings Market will gain a significant value with a CAGR of 4.14% over the forecast period.

Some of the prominent drivers supporting the growth of global magnet bearings market are cost-effectiveness, energy-efficient flexible solutions, and increasing application in HVAC, aerospace, & defense. However, the economic slowdown in China is the restraining factor for the magnet bearings market.The Navy Technology Validation Program conducted three magnetic bearing chiller retrofits as a demonstration project between 2005 and 2007. The installations resulted in 40-65% power savings over the original equipment, and reduced maintenance costs when compared to the traditional positive-displacement water-cooled chillers. The magnetic bearings enable the compressor to work without the use of oil for lubrication, which reduces energy loss. This happens due to friction and improves the heat transfer efficiency of the chiller, as no oil enters the evaporator or the condenser. It has been a long time since oil-free magnetic bearing centrifugal compressors have entered the HVAC market. Magnetic-bearing centrifugal chillers make use of permanent magnets synchronous compressor motors.  Such motors have enabled efficiency over an induction motor, especially at low motor speeds.

Schaeffler has agreed to a five-year deal with Norway's REEtec. The deal is to supply rare earth oxides from 2024; COO Andreas Schick told Reuters.

German auto parts supplier Schaeffler has signed a raw materials deal. The deal is to ensure the supply of rare-earth magnets from Europe. It is for its burgeoning electric vehicle (EV) motor business; an executive told Reuters.

May 2022 - NASA has extended the planetary science missions of eight of its spacecraft, which will help deepen the understanding of the solar system. Each of the tasks was reviewed by more than 50 people. The decision to prolong was based on their potential to continue bringing discoveries and addressing compelling further science questions.

The magnet bearings market has been segmented based on type, application, end-user, speed, and region. On the basis of type, the market has been segmented into active magnet bearing, passive magnet bearing, and hybrid magnet bearing. Active magnet bearing has dominated the market due to the ability of such bearings to exert higher-density forces on surfaces of supported objects when compared to another type of magnetic bearings. These bearings can operate across a wide range of environments with additional benefits such as reliable performance under extreme conditions, high performance in a compact design, increased product life, and energy saving and safer operation. On the basis of application, the market has been segmented into compressor, turbine, pumps, motors, generators, and others. The segment accounted for 27.31% market share in the global bearings market in 2016. This is because when used in turbines, such bearings have major technological advantages such as oil-free operation, operation in extreme temperature environments, and active control.

On end-user, the market has been segmented into oil & gas, petrochemicals, power, and others. Power is expected to hold the largest share as the rising cost of energy along with the harmful environmental effects of power production have placed emphasis on taming renewable sources of energy and improving the utilization of energy, which induced the market growth of magnet bearings.

Geographically, the global magnet bearings market has been divided into four major regions such as Americas, Europe, Asia Pacific and Middle East & Africa. Asia Pacific has dominated the magnet bearings market due to increase in foreign investment in construction sector. Furthermore, the government initiatives, and emphasis on the growth of core sectors such as power, and aerospace, defense has ensured fastest growth in the Asia Pacific market. China is one of the leading markets in the Asia Pacific region. The country has witnessed increasing demand for eco-friendly and sustainable construction and the government support fuel the demand of magnet bearing in the construction industry. The Chinese power industry has focus of both domestic and international players for a very long time. There have been various government programs pushing the sector. It is because of this that the industry is a major consumer of magnet bearing in the country.

Americas is also an important market for magnet bearing to prosper. It is mainly due to the well-established aerospace, & defense, and power industries. In Americas, U.S. is the largest market for magnet bearing. It accounted for the largest market share in 2016. The share is attributed by various factors such as increase in private construction value, various government regulation to push the energy & power industry, and increasing investment in the aerospace & defense sector. On the other hand, spending on infrastructure to ensure delivery of power to homes and industries has increased steadily in last ten years. The investment has been made for building utilities, upgrading, and replacing station equipment, poles, fixtures, and overhead lines and devices. This spiked the growth of magnet bearing in the region.

Magnetic Bearings are essential devices used to levitate objects using magnetic forces. Some magnetic bearings offer complete non-contact support of an object, whereas others provide partial support with more traditional mechanical bearings. Such bearings are used in applications such as compressors, turbines, pumps, and motors.

The report for Global Magnet bearings market of Market Research Future comprises extensive primary research along with the detailed analysis of qualitative as well as quantitative aspects by various industry experts, key opinion leaders to gain the deeper insight of the market and industry performance. The report gives the clear picture of current market scenario which includes historical and projected market size in terms of value and volume, technological advancement, macro economical and governing factors in the market. The report provides details information and strategies of the top key players in the industry. The report also gives a broad study of the different market segments and regions.

At what CAGR can the magnet bearing market expand?

What is the estimated valuation for the magnet bearing market?

The magnet bearing market poised to attain substantial revenue by 2027.

Who are the key players of the magnet bearing market?

What is the magnet bearing types?

What is the regional analysis of the magnet bearing market?

Magnet Bearings Market to Create a Niche in the Healthcare Industry