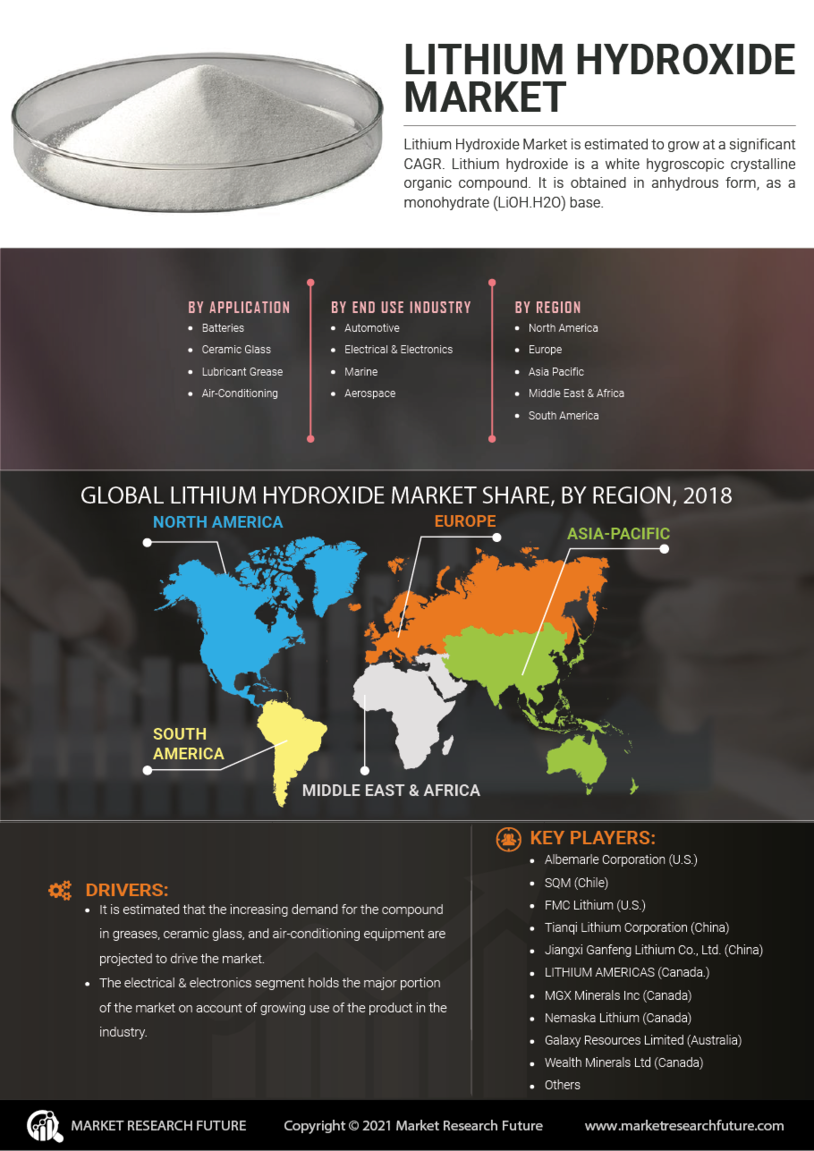 Lithium hydroxide is a white hygroscopic crystalline organic compound. It is obtained in anhydrous form as a monohydrate which is another name for strong bases. it is not soluble in ethanol and is soluble in water. Its properties like high energy density, thermal resistance, long durability, and minimum maintenance. It is manufactured from various sources like brines, and petroleum hard rocks. Due to its economic nature, manufacturers in various countries have developed their production processes. Lithium hydroxide is used to manufacture lubricants, greases, batteries & energy storage. It is also used in air purification devices and also in the making of ceramics.

The coronavirus pandemic has given a very hard time to most of the manufacturing, developing, production, and logistic units of the market. Due to this pandemic situation, restrictions were imposed by the government of different countries. The lithium hydroxide market, on one’s side, has been drastically affected due to the stoppage of electrical automobiles and different industries works that require high-powered batteries for running their regular daily operations. But this effect has been balanced by the manufacturing of lithium-ion batteries used in electronic devices such as mobile phones, tablets, etc. as every person was using these electronic devices for work, and demand for electronic items increased which in turn increased the demand for lithium-ion batteries. So it can be said that this industry has faced very moderate loss during the pandemic but will bounce back with 10x profits in very little time after the restrictions are lifted.

To get a detailed and profound idea about the Lithium hydroxide market insights, it is very important to create a competitive environment amongst the different key players at different market locations all around the country. . All the market players are competing with each other globally in the international markets by implementing various types of strategies such as product launches and upgradations, mergers and acquisitions, partnerships, etc. The prime players of this market include:-‘ 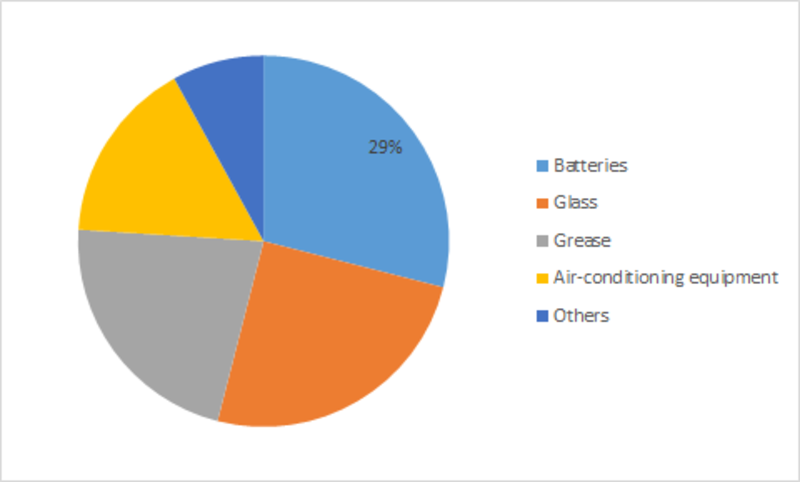 Lithium hydroxide can also be used as a carbon dioxide absorbent in breathing gas purification systems and such systems are used in space crafts and submarines. The anhydrous form of LIOH is used in spacecraft respirator systems due to its lower mass and production of water. So it may drive the market growth to a large extent. Also, lithium hydroxide is commonly used in making batteries whether they are used in electronic gadgets or automobiles, or big industries for powering machines. So this rising demand for electrical batteries in automobile and electronic applications is another major factor that can enhance the growth of this market. Lastly, the constant support from the government by way favorable policies are giving a boost to demand for lithium-ion batteries, and these policies are attracting massive investments in the field of clean fuel technology which is another factor responsible for lithium hydroxide industry growth.

No doubt the lithium-ion batteries are very widely used and lithium hydroxide is the main element present in such batteries but they require proper protection while making use of them as lithium-ion cells and batteries are not as powerful as other rechargeable technologies. They are to be prevented from being overcharged and discharged for so long. So this factor can be a major factor that can hamper the growth of this market. Secondly, for the making of lithium batteries, the electrolysis process of lithium hydroxide is performed at a very large scale and it requires skilled labor to perform this process. So the massive cost of this process can be another factor that can hinder the lithium hydroxide market growth.

The major use of lithium hydroxide is in making cathodes for rechargeable batteries that are to be used in electrical vehicles. And due to its low density and extreme electrochemical potential, it is the most preferred among lithium compounds. There are two types of lithium batteries that are rechargeable or disposable. Disposable batteries use lithium as an anode in its metallic form. And such batteries are developed on a high scale as they have a long life that is a high charge density as compared to other standard batteries. Many technological advancements are looked upon to meet the customer’s demand of large power requirements with less cost. To increase the charge capacity, many substitutes are being tested to be used as anode in such batteries. Lithium-air, lithium-oxygen, and lithium-sulfur are considered to be the best alternatives till now.

Lithium hydroxide market share is anticipated to witness significant growth owing to the performance of different market segments. Among these segments, the batteries segment will be the fastest-growing and also contribute towards this market growth more than any other segment. As in the battery grade, the purity rate of LIOH is almost 99% and has low mineral impurities. And every size of batteries whether they are to be used for mobile phones or electronic devices or industrial purposes is made up of lithium hydroxide. LIOH is also preferred over other compounds as its water and HCL solubility is very low. For an amplifying use the market has been segmented into the following on different bases:

The Lithium hydroxide industry movements are remarkably working in 5 major regions of the world that is North America, Asia Pacific, Africa, South America, and the Middle East. Among all these regions, the Asia Pacific region will dominate this market, and the reason attributed to it is the rising adoption of lightweight metal in batteries, glass, grease, air conditioning equipment, and others. The growth of the market in this region will be led by India, China, Japan, and South Korea. The North American region will witness tremendous growth during the forecast period due to the rising production of lithium-ion batteries in the electronic and electrical industry. The European market can also expect significant growth due to strict rules and regulations implemented by the government of different countries to use lightweight products in end-user industries. The Middle East and African region are anticipated to experience a notable development in the market due to the rising consumption of low-density materials in smartphones, tablets, and other electronic gadgets.


December 2021
A lithium developer focused on projects in Europe, Vulcan Energy, disclosed that the company has settled agreements to be a renewable energy generator and ensure speedy access to geothermal brine operations.The firm said that it had finished the acquisition of an operational geothermal renewable energy plant, with proven lithium-in-brine grades, located in the Upper Rhine Valley, Germany, which can manufacture both lithium hydroxide and renewable geothermal energy for electric vehicles.

December 2021
Northvolt, a Sweden-based battery manufacturer, and Galp, a Portugal-based energy company, have decided to set up a joint company, Aurora, which focuses on becoming a bridge for the development of an integrated lithium-battery value-chain associated with European and Portuguese ambitions.With the main target of founding Europe’s largest and most sustainable integrated lithium conversion plant, the joint venture will build a plant set to have a primary yearly manufacturing capacity of over 35,000 tons of battery-grade lithium hydroxide- a restorative material needed by the lithium-ion battery manufacturing industry that is anticipated to grow more than tenfold by the end of the decade.

Prime players of this market are trying their best lithium batteries with high efficiency, energy density, and other efficient characteristics. Some of these players are also involved in manufacturing glass, grease, and air conditioning types of equipment.

Massive investments are being made by the key players of this market and that too mostly in end-use industries such as aerospace, automobile, and others that will stabilize their feet’s in the global market.

Due to the rise in urbanization, the demand for electronic devices is increasing day by day which will give a major push to the companies involved in manufacturing lithium-ion batteries. Due to greater efficiency, almost all power tools are expected to be powered by these lithium-ion batteries.Tesla is mainly pioneering this growing market but the largest enhancer is present in china that is the use of EV technology, where the subsidies given by the government provides for both passenger and commercial EV vehicles.

June 23, 2020
Piedmont Lithium Limited (PLL - Australia), an emerging lithium company, announced its partnership with Primero for lithium concentrator development. These firms have entered into a memorandum of understanding (MoU) that allows Primero Group, the Australia-based engineering firm, to deliver the planned spodumene concentrator at the Piedmont lithium project in North Carolina, USA. PLL would continue to evaluate other strategic partnerships to enhance performance in the design, construction, and operations of other aspects of its integrated lithium hydroxide business.

The Lithium hydroxide industry report presents a shift analysis that includes market drivers, opportunities, and restraints that are available in the global market. The report discusses the impact of covid-19 on the key players of this market. The report also tells about the market segmentation on a different basis and how a competitive environment is developed among the key players around the globe. At last, the report presents some recent developments in this industry.

What are the major applications of lithium hydroxide?

Major applications of lithium hydroxide include batteries, glass, grease, air-conditioning equipment, and others.

Is lithium hydroxide soluble in water?

What is the major driver for the lithium hydroxide market?

The growing demand for electrical batteries in automotive and electronics applications is likely to be the major driver for the global lithium hydroxide market over the forecast period.

Which is the leading end use segment for the lithium hydroxide market?

The electrical and electronics industry is likely to remain the major end user of lithium hydroxide over the forecast period.

Which is the major regional market for lithium hydroxide?

Asia Pacific holds the largest share in the global lithium hydroxide market due to the growing electronics industry in the region.