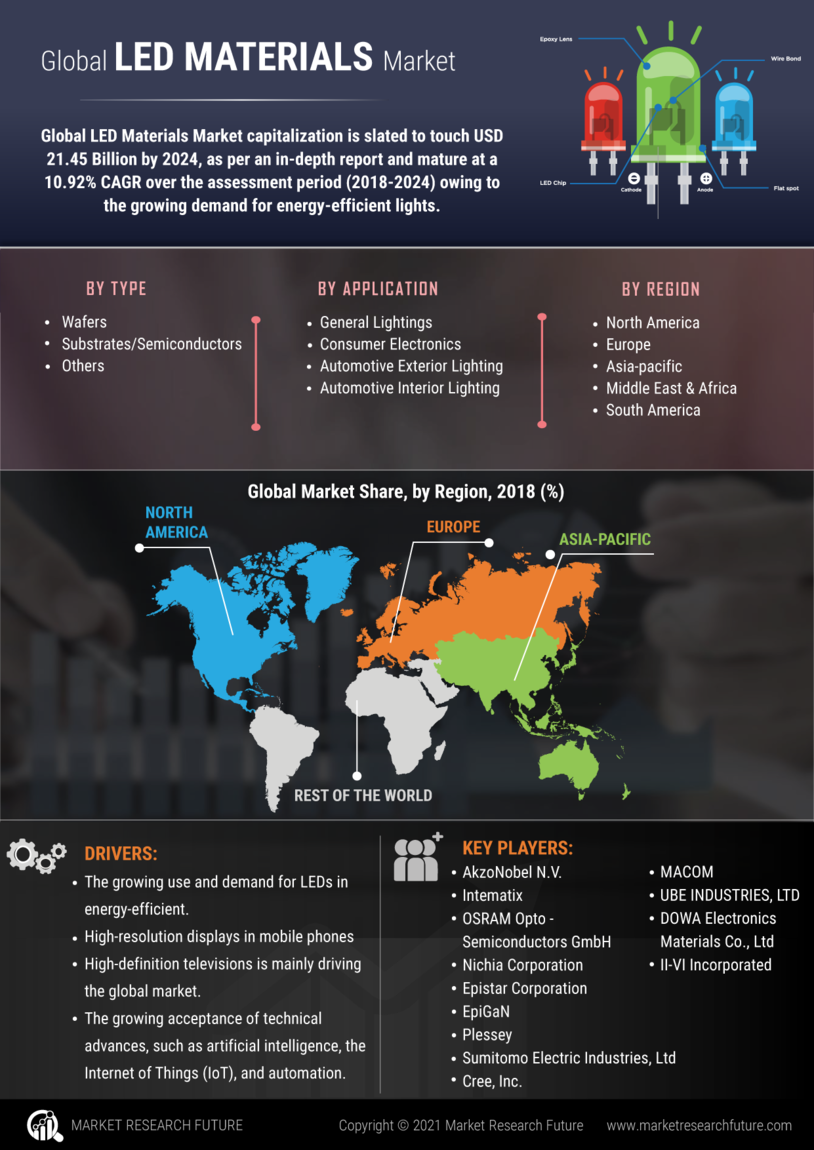 LED Materials Market capitalization is slated to touch USD 22.68 Billion by 2027, as per an in-depth report by Market Research Future (MRFR), period (2021-2027) owing to the growing demand for energy-efficient lights.

The COVID-19 pandemic has seriously impacted the LED lighting sector by upsetting the supply chain, slowing production and impacting the lighting industry. The building sector has also seen a downturn, leading to a slump in demand for lighting goods. Although countries such as Australia have not halted building, schemes have been closed for a significant amount of time around the U.S., India, and several European countries. Moreover, the downturn in retail, manufacturing and other sectors has led to a decrease in demand due to a decreased budget for new factories or commercial premises. The adoption of LED lighting products will also be influenced as the vendors are preparing to raise the price of the items.

The growing use and demand for LEDs in energy-efficient and high-resolution displays in mobile phones and high-definition televisions is mainly driving the global market for LED materials. The growing acceptance of technical advances, such as artificial intelligence, the Internet of Things (IoT), and automation, is strongly motivated by the demand for LED materials. In applications such as a high-definition television monitor, video, camcorder, telephone, and optical fibre networking, LEDs are gradually being used. The growing application of LEDs in the requirements for vehicle lighting and show, home and industrial lighting further boosts the LED market, which in turn drives demand for LED materials. In addition, favourable government regulations, including different labelling and credential schemes, provide the LED industry with new opportunities for expansion. Compared to standard lights, one of the key reasons for the accelerated adoption of LED lights is their comparatively lower power usage. The power consumption is as minimal as one-third in some situations.

By introducing and designing energy-efficient devices, policymakers worldwide are focused on reducing energy prices. The ban on the use of incandescent bulbs would fuel the market's growth. In addition, the rising demand for energy-efficient lighting is leading to market growth.

However, factors such as raw material price volatility, the availability of alternative goods, high costs associated with LED materials, the absence of universal compliance guidelines on the use of LEDs in different end-user sectors and less penetration in many underdeveloped countries restrict demand growth over the prognosis period. Moreover, the lifespan of the LED devices is restricting the growth of the market. Moreover, the lack of awareness about the advantage of LEDs is hindering the growth of the market.

The market for LED materials has been categorised into wafers, substrates/semiconductors, epitaxy powder, phosphorus, and others by type. The wafers are sub-segmented into silicon, sapphire, silicon carbide, and others. During the forecast span, the sapphire segment is proposed to extend at a CAGR of 8.25 percent. Due to the high usage of wafers in microelectronic devices, the silicon segment is projected to experience robust growth.

The geographical overview of the global market has been conducted in four major regions, including the Asia Pacific, North America, Europe, and the rest of the world.

APAC to Lead with Expansion of End-use Sectors

Directed content demand in Asia Pacific is driven largely by the large-scale LED manufacturing industries in China, South Korea, and Taiwan. In addition, Asia-Pacific is also a centre for makers of original equipment (OEMs) of different lighting items. Due to the significant investment in R&D in new LED products in countries such as Vietnam, South Korea and Taiwan, the other driving force for the LED demand growth in this region.In addition, with rising focus on the IT sector, improving the power generation and distribution system of developing economies and declining LED rates, primarily due to developments in manufacturing technology, a higher growth rate is projected during the forecast period. In expectation of this boom, some countries like China have advocated for the construction of more productive LED manufacturing capability to be correctly placed to grab market share in the future. China has begun to take the lead in the production of LEDs as rates, benefiting from the government's major financial subsidies and incentives.

U.S. to be the Major Contributor for North America

Owing to increasing building rebuilding and increasing automobile production in the United States and Canada, North America held the second largest market share in the global LED material market. In this area, the United States is leading the market as its electrical and electronics business is flourishing.

Due to new European Union policies and guidance relating to the use of light emitting diode technologies and strong investments in R&D for energy-efficient lighting solutions in several European countries, Europe is projected to have the third largest market share over the forecast period. The increasing use of LEDs in various display technologies is projected to bring moderate growth to the European market for LED materials. In addition, through direct policy initiatives, several countries are attempting to quickly expand the use of LED bulbs in homes.

December 2020: The Korea Institute of Science and Technology (KIST) reported that the joint research team headed by Yonsei University's Dr Yong-Chae Jung and Hak-soo Han has been able to create a self-healing colourless electronic material that can fix the material's cracks or impaired functions.

December 2020: KONKA, a leading technology firm in China, unveiled the world's first micro-LED watch, the APHAEA Watch. KONKA also featured the upcoming APHAEA collection of Micro LED display devices, showcasing the company's micro-pitch LED display R&D strengths and its devotion to introducing high-precision manufacturing to the consumer market.Scientists at the U.S. Naval Research Laboratory are focusing on halide perovskites to enhance the efficiency of LED lights. Cesium lead halide perovskites possess the potential to emit light at a rapid velocity as compared to standard LED materials. The success of these materials can lead to the development of stronger and efficient LEDs and lasers.November 21, 2019 -Chip maker Epistar double its investment in Mini LED boosting its capacity so as to tap the growing demand.

In order to include the most reliable estimates and forecasts, this study covers current events and developments in the LED materials industry. Our researchers were able to render extremely detailed predictions in the study by correlating the historical evidence with key industry dynamics. A detailed segmental review of the global market for LED materials segmented on the basis of form, application, and area with astute insights is included in the MRFR report.

The study includes a detailed overview of the worldwide LED materials industry for the scope of review.

How much is the global LED materials market worth in the future?

The valuation of the global LED materials market is projected to grow to USD 22.68 BN by 2027

Who are the top players in the global LED materials market?

Which region holds the largest share in the global LED materials market?

What are the key growth strategies of LED materials industry players?

Strategic initiatives such as mergers & acquisitions, collaborations, expansion, and technology/ product launch are some of the growth strategies that players operating in the global LED materials market adopt to gain a larger competitive advantage.

What are the major applications of LED materials?

LED Materials Market to Exceed a Valuation of USD 22.68 Billion by 2027