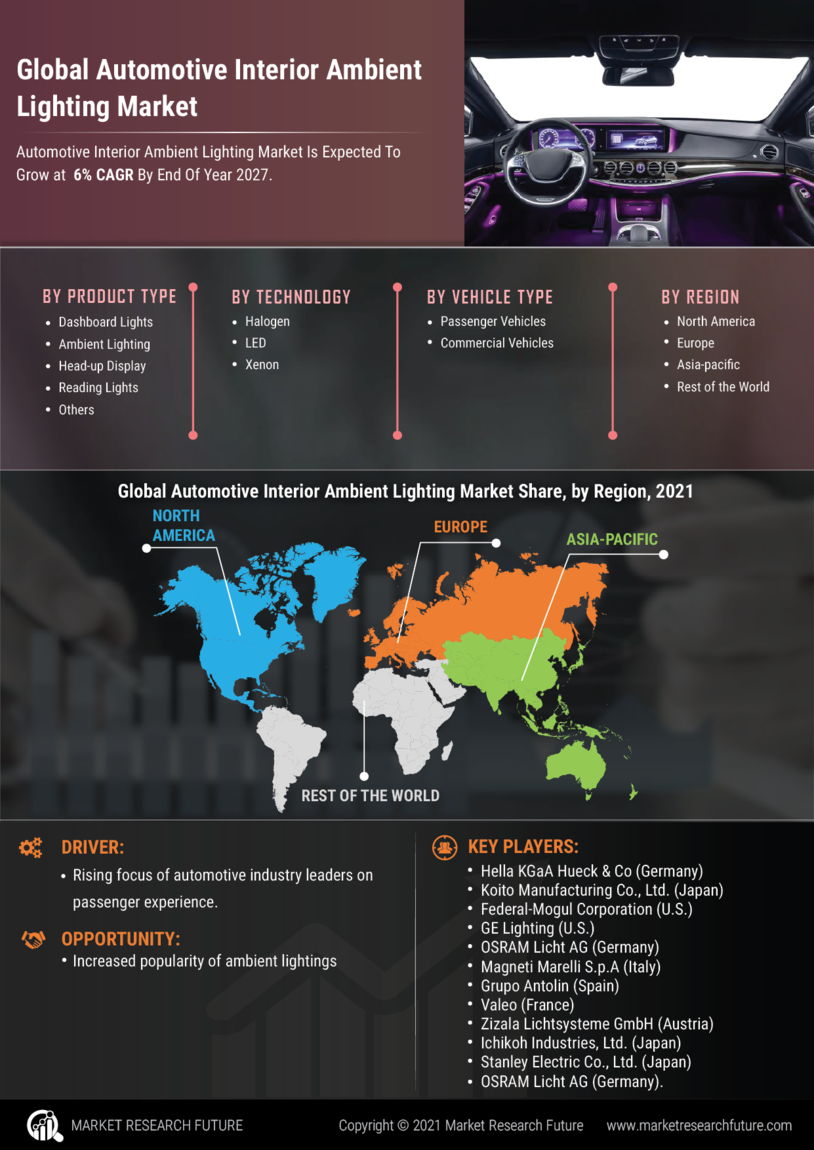 Automotive interior ambient lighting market has seen remarkable growth in the global market and it has been observed that, its demand in the future is expected to grow at CAGR of 6%.

The global automotive interior ambient lighting market has been segmented on the basis of product type, technology, vehicles type and region. On the basis of technology, the market has been segmented as halogen, LED and Xenon. Among this, LED is expected to dominate the global market by technology, in 2016, in terms of market revenue. The growth of LED can be attributed to factors such as greater number of features such as increased energy efficiency as compared to the previous lighting technology, and the phasing out of the previously used halogen bulbs.

Geographically, the global automotive interior ambient lighting market has been divided into four major regions such as North America, Europe, Asia Pacific and Rest of the World. Amongst these, North America region is expected to dominate the global market owing to the factors such as rising disposable income, and increasing new vehicle registrations. Europe is the second leading region, in terms of revenue. Asia Pacific region is expected to grow with the highest CAGR over the forecast period as the region accounts for the highest automotive sales over the forecast period. In Asia-Pacific region, countries such as China, Japan, India and Indonesia are expected to contribute significantly owing to the increasing demand for passenger vehicles.

Automotive interior ambient lighting refers to the use of lighting for creation of a more stylish and aesthetically improved atmosphere, inside an automobile. The concept of interior ambient lightings was initially introduced in the luxury vehicles but is now being extensively used in all kinds of passenger and commercial vehicles. The ambient lighting ensures that the interior of the vehicle is more aesthetic and makes the in-cabin of automotive, feel more spacious. These lightings are extensively being used for driver safety as it ensures greater visibility of dashboard, and is therefore being used by the automotive manufacturers as a tool for product differentiation. Automobile manufacturers are also using these ambient lightings for creating product differentiation from other competitors.

The report for global automotive interior ambient lighting market of Market Research Future comprises of extensive primary research along with the detailed analysis of qualitative as well as quantitative aspects by various industry experts, key opinion leaders to gain the deeper insight of the market and industry performance. The report gives the clear picture of current market scenario which includes historical and projected market size in terms of value and volume, technological advancement, macro economical and governing factors in the market. The report provides details information and strategies of the top key players in the industry. The report also gives a broad study of the different market segments and regions.

What is the driving factor of the automotive interior ambient lighting market?

The automotive interior ambient lighting market is poised to benefit from the rising focus of automotive industry leaders on passenger experience.

What is the expected CAGR of the automotive interior ambient lighting market?

Which region is expected to exhibit the highest growth rate?

Asia Pacific is assumed to witness the highest growth rate.

On the basis of technology, what are the segments of the automotive interior ambient lighting market?

The segments of the automotive interior ambient lighting market, by technology, are LED, halogen, and Xenon.

Which players are projected to play developmental role in the coming years?

Global Automotive Interior Ambient Lighting Market, To Grow At Cagr Of ~6% By 2027