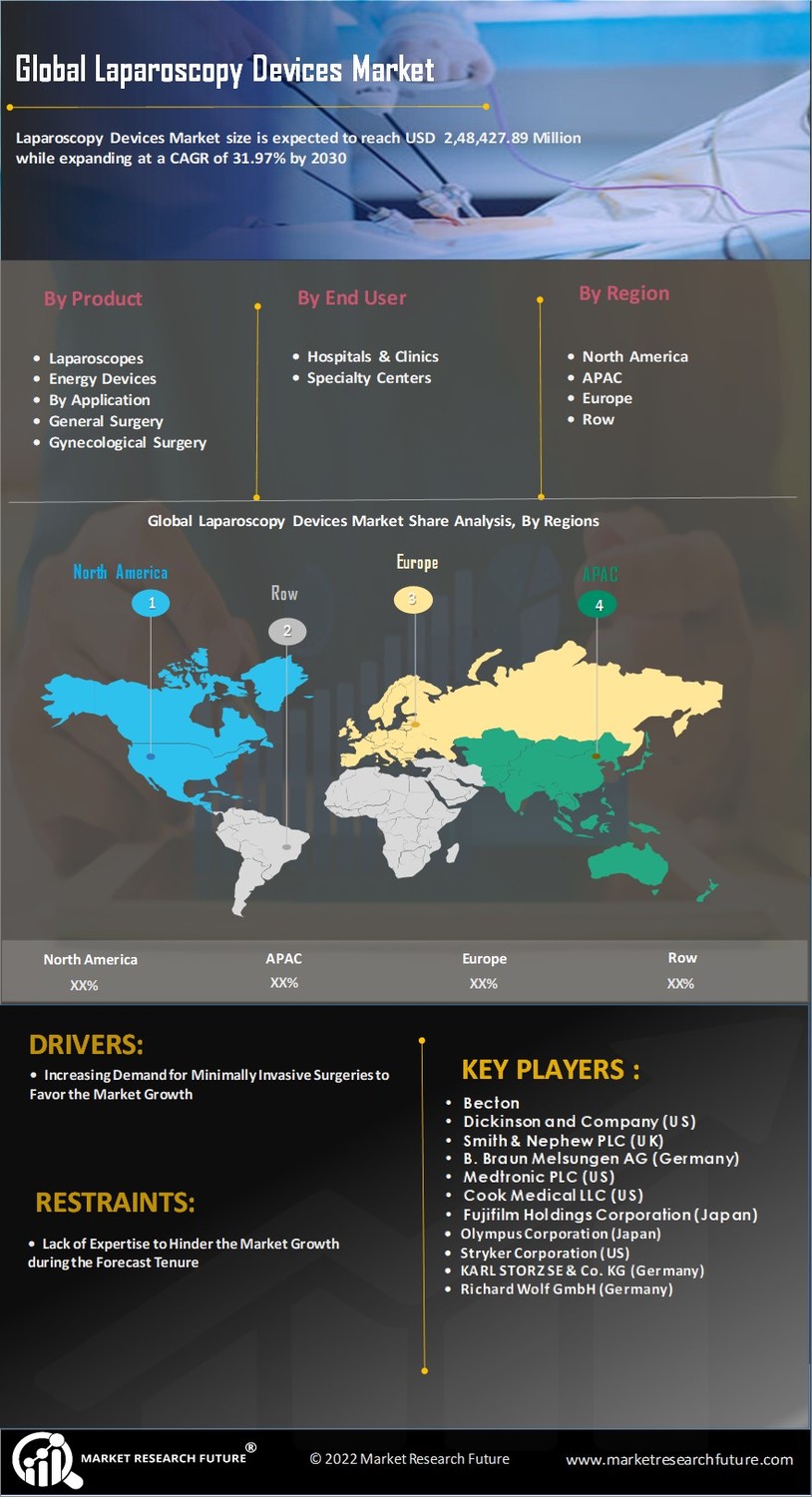 Laparoscopy Devices Market size is expected to reach USD 2,48,427.89 Million while expanding at a CAGR of 31.97% by 2030, says Market Research Future (MRFR). Laparoscopy equipment are commonly employed in the detection and treatment of a variety of ailments, including prostate cancer, pancreatic cancer, and gastrointestinal issues. The use of these devices during surgical procedures helps to minimize bleeding and aids in hemostasis maintenance. Laparoscopy devices are preferred by surgeons and clinicians alike due to the high level of precision they provide during procedures.

The surging demand for minimally invasive surgeries is anticipated to boost the industry during the review timeframe. The growing awareness about minimally invasive surgeries is likely to increase its adoption as well, which is predicted to be a crucial factor in promoting market expansion in the analysis timeframe. Besides, increasing funding and favorable policies offered by the government of various countries are likely to augment the market significantly in the assessment tenure. Also, the expanding geriatric population is projected to be another salient factor strengthening the market expansion during the review tenure.

The increasing demand for data-integrated systems is projected to offer several lucrative opportunities to bolster the market during the assessment period. In addition, developing countries are predicted to play a salient role in providing opportunities for market growth. The presence of untapped market opportunities can assist to strengthen the trade in the coming period.

Post-Impact of Laparoscopy Procedures to Pose a Significant Challenge

The post-impact of the laparoscopic surgery is expected to pose a significant challenge that can limit market expansion during the assessment period.

The global market for laparoscopy devices is anticipated to show significant growth during the forecast period owing to the growing demand for minimally invasive surgical procedures and the presence of favorable reimbursement policies. However, the market can be hampered with a lack of expertise.

Based on product, the global market for laparoscopy devices market is segmented into energy devices, laparoscopes, insufflation devices, handheld instruments, suction/irrigation devices, access devices, internal closure devices, trocars, and others. Among all, the laparoscope is predicted to lead the market, which is likely to grow at the highest CAGR while amassing the market value of USD 5091.77 million during the forecast period.

The Americas is projected to acquire the largest market share during the review period owing to the rising GDP per capita income and the growing geriatric population. The growing incidence of chronic ailment is predicted to surge the need for an effective diagnosis and therapeutics. The US is projected to make the most salient contribution in developing the regional market during the review period.

Europe is predicted to procure the second largest market share during the review period owing to the expanding patient pool and the growing research on laparoscopy. Also, the rising healthcare expenses and adoption of integrated monitoring devices into the market are projected to bolster the regional market during the forecast period. The UK is predicted to make a significant market value during the assessment timeframe.

APAC is predicted to be the fastest-growing market during the forecast period while amassing the market value of USD 4205.58 million during the forecast period. The expanding patient pool and the rapid development in the healthcare infrastructure are projected to develop the regional market in the assessment tenure. In addition, the participation of developing countries is likely to further drive the regional market.

MEA region is predicted to procure the least market share during the review period owing to lack of awareness and poor healthcare infrastructure. The Middle East is projected to make the most notable contribution in developing the regional industry due to its economic stability and better health awareness than the African region.

Several players are adopting various strategies such as acquisition, partnership, and mergers that are expected to strengthen the market and intensify the competition.

Key Players Profiled in the Report

January 2022: Seger Surgical Solutions began development of its next-generation laparoscopic equipment for intracorporeal anastomosis. The novel device, designated LAP IA 60, is capable of aligning, sealing, and stapling the common intracorporeal anastomosis opening rapidly, securely, and without suturing. In comparison to suturing, which typically takes 15 to 20 minutes, the Seger device seals the enterotomy in just two minutes. The closure device, which is inserted using a standard 12-millimetre trocar, enables surgeons to conduct complete laparoscopic bowel anastomoses for improved clinical outcomes. Additionally, this results in improved outcomes, enhanced patient care, and a reduction in problems and healthcare expenses.

The global laparoscopy devices market is expected to reach a valuation of more than USD 2,48,427.89 million by 2030.

The global laparoscopy devices market is expected to exhibit a strong 31.97% CAGR over the forecast period from 2020 to 2030.

What is the key driver for the market?

The increasing prevalence of chronic diseases and the growing geriatric population are the key restraints on the global laparoscopy devices market.

What is the dominant product type in the market?

Laparoscopes are the dominant product type in the market.

The Americas and Europe dominate the global laparoscopy devices market.

The Global Laparoscopy Devices Market Is Expected To Grow At CAGR Of 8.30% the Forecast Period 20...