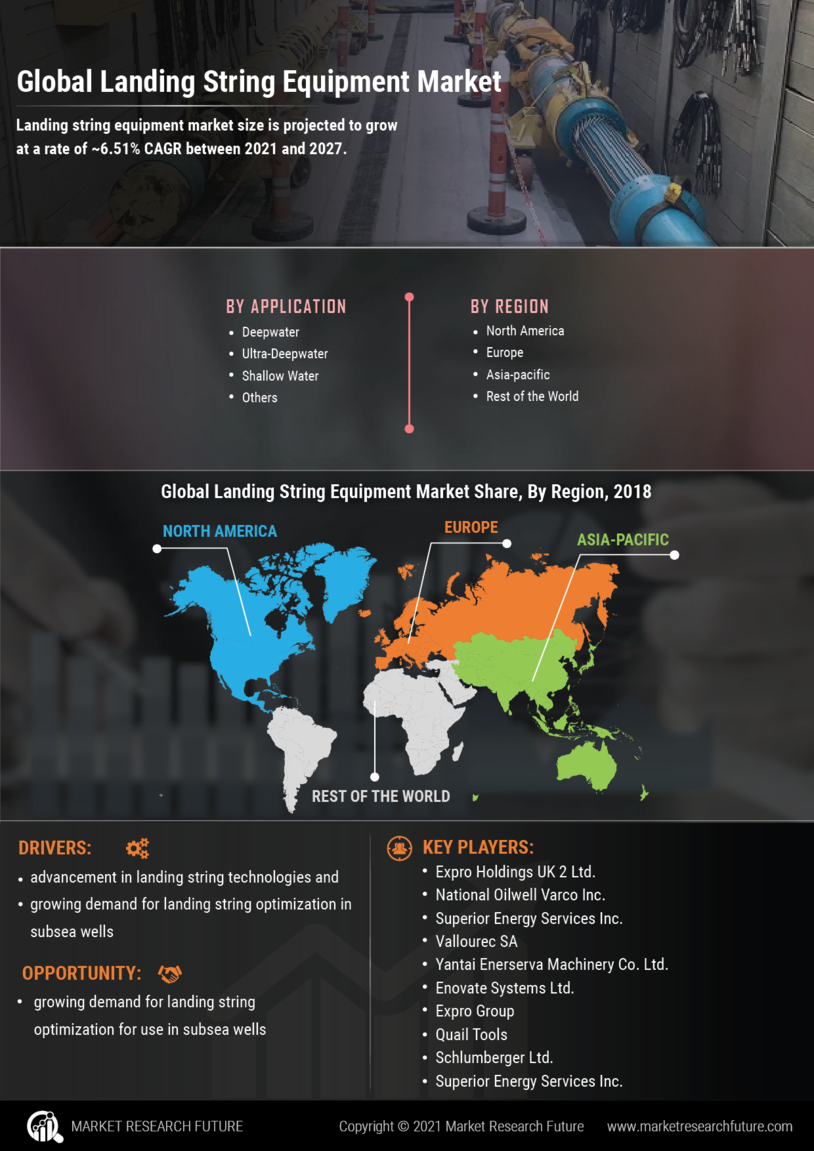 The Landing String Equipment Market will register significant market value with a CAGR of 6.51% in the forecast period.

The landing string equipment combines systems installed between the first riser point. The system consists of equipment like a retainer, lubricator, etc. The system allows higher running speeds compared to other landing methods. The traditional drill strings focus primarily on the ability to transfer drilling torque, unlike this one. One of the other prominent features of landing string equipment is this string equipment. The equipment is fitted with riser safety systems that interface with the subsea wellhead on the seabed to allow completion or well intervention activities to be conducted safely from floating vessels. The rising demand for landing string equipment is increasing due to the increase in deepwater drilling. The need for oil and gas to manage the fuel demand is the major factor in the market's acceleration. The growing demand for renewable resources and the high price of crude oil will hamper the oil and gas industry, resulting in the market's decline.

April 2022 - Russian forces make gains in Ukraine's east. Russia's military holds a string of villages in the Donbas region. And now the focus of Moscow's offensive, continuing on the 64th straight day.

In mid-March, the Offshore Technology Conference (OTC) announced the winners of its 2022 Spotlight on New Technology Award. The prestigious award is presented to OTC exhibitors who are revolutionising the future of offshore energy through technological advancement and innovation.

November 2021 - Expro of ABERDEEN, UK, has won subsea good access contracts in the Asia/Pacific region with a combined value of more than $50 million.

Other significant contracts involving subsea systems technology specialist Interventek, which entered into a contract with Baker Hughes in September 2020. Under this contract, the landing strings have been incorporated within Baker Hughes’ subsea systems as they develop and expand their in-house offering.The supply agreement also includes the provision of support for inspection, training, testing, maintenance, and deployment of the technology.Similarcontracts and developments are expected to drive the growth of the global landing string equipmentmarket during the forecast period.

The global landing string equipment market has been segmented based on application. Based on application, the landing string equipment market is divided intodeepwater, ultra-deepwater, shallow water, and others. The deepwatersegment is expected to hold the largest share in the global market during the forecast perioddue to an increase in deep-sea mining to meet the energy requirement across the globe.Moreover, deepwater is one of the major application areas for landing string equipment as many companies across the world are focusing on reviving the pending projects of deepwater. Additionally, deepwater offshore application accounts for the significant share of the operated production of various companies and is a strategic and fast-growing segment for some major companies, including TotalEnergies. 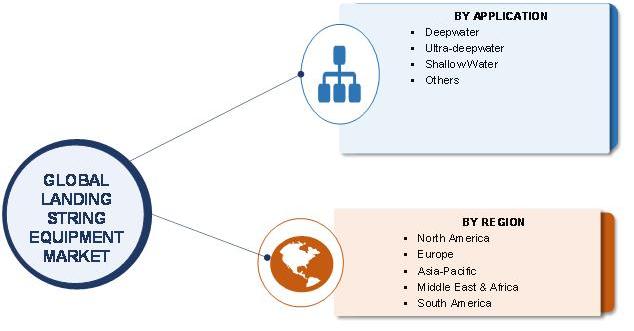 Landing string equipment are a combination of systemsthat are installed between the tubing hanger and the first riser point. The landing string system generally contains equipment such as subsea test tree, lubricator valve, and retainer valve. Moreover, landing new and advanced string equipment are used owing to their compatibility with conventional drill pipe handling systems. This system enables higher running speeds compared to alternative landing methods. On the other hand, traditional drill strings focus primarily on the ability to transfer drilling torque. One of the other major features of landing string equipment is that these string equipment are fitted inriser safety systems that interface with the subsea wellhead on the seabed to allow completion or well intervention activities to be conducted safely from floating vessels.

Moreover, in critical situations, landing string system provides more control whenever required by end-user. Some of the major companies provide a very comprehensive products related to landing string equipment. For instance, Schlumberger offers the SenTURIAN Family systems in conjunction with the SenTREE subsea test tree systems, the landing string disconnects from the wellhead in 15 seconds, providing a dual barrier of protection that safely closes in the well and retains all the contents of the riser to prevent spillage. The landing string can also be reconnected quickly when conditions return to normal. Similarly, TechnipFMC also offers a wide product range of landing string equipment which is suitable for primary wellcontrol barrier during a range ofsubsea operations. The company provides full system integration of the Landing String (LS) with the subsea equipment and vessel to reduce complexity of interface management and therefore minimize operational risk. Such innovative products offered by the major companies is likely to boost the demand for landing string equipment.

At what CAGR is the Landing String Equipment Market predicted to grow during the forecast period?

Landing String Equipment market is predicted to grow at 6.51% through forecast period of 2022-2030.

Who are the major participants of the market?

Which region will lead the global Landing String Equipment market?

What are the key factors driving the Landing String Equipment market?

The global landing string equipment market is expected to rate high growth during the forecast period due to the growth in deep water drilling and an increase in the demand for oil & gas to cater to the increased demand for fuel.