Landfill Gas Market share is expected to reach USD 3 Billion by 2030, expanding at a compound annual growth rate (CAGR) of 8% during the forecast period.

By Application Direct Use Upgraded

Because of the rising demand for sustainable energy generation around the world to reduce reliance on fossil fuels for power, the landfill gas market is expected to rise significantly over the projected period. Moreover, increased power demand across various end-use sectors is likely to add to the global landfill gas market's growth over the forecast period. Nonetheless, favorable government policies and regulations around the world are projected to provide profitable prospects for landfill gas providers. An increased supply of renewable landfill gas would allow carbon-intensive energy sources to be replaced, resulting in considerable reductions in global warming emissions.

Landfill gas can be used as a low-carbon, sustainable alternative to conventional fossil fuels, producing bioenergy, which is considered a clean fuel for energy generation when burned. Growing global energy demand is expected to promote the production of bioenergy from biomass and landfill gases, which will, in turn, drive the expansion of the landfill gas market. Due to the rising urbanization and a fast-growing population around the world, global energy demand has risen at an exponential rate in recent years. The majority of energy produced around the world comes from fossil fuels, which emit damaging GHG emissions when burned. Landfill gas, on the other hand, is a carbon-neutral carrier that can help significantly reduce greenhouse gas emissions.

The impact of COVID-19 on the global economy is changing every day. It is proving to be a major challenge for the renewable industry, resulting in a shortage of raw material supply and impending job losses. In the energy & power industry, companies are dealing with several challenges due to a decline in electricity prices post the COVID-19 outbreak. Moreover, the Asia-Pacific is one of the largest markets for landfill gas. The slowdown in the country’s economic growth has affected the overall generation and renewable energy investment globally. Similarly, during the COVID-19 crisis, there has been an increased focus on renewable technologies; however, fewer power plants were working due to labor constraints.

According to the Ministry of New and Renewable Energy (MNRE) reports, in India, only ~222 MW of solar and ~25 MW of wind capacity was achieved in March as all activities came to a halt due to the pandemic. Similarly, according to the survey conducted by the World Bioenergy Association (WBA), the majority of the respondents mentioned the significant impact of the pandemic on bioenergy business, leading to a reduction in investment and termination of new investments in the bioenergy and landfill gas sector. Additionally, in the landfill gas market, the gas treatment companies have experienced a major change in 2020 due to lesser restrictions. Major landfill gas manufacturers such as Landfill systems ltd., Veolia A/S, Waste Management Inc, and Suez SA had faced a production shutdown, resulting in huge backlogs and delays in completing orders.

COVID-19 has led to severe impact across all the industries around the world. The rapid spread has led governments across the globe to take stricter actions for the operations of industrial plants and offices, leading to stricter lockdowns. The lockdown had a notable impact on the energy sector overall as energy demand had decreased around 18% to 20% in 2020. Moreover, the virus also significantly impacted the landfill gas and bio-energy segments, with a moderate impact on up graded and fill gas. The impact was in terms of a slight decline in revenues and a challenging situation with managing the cash flow of the market players.


Landfill gas can be used as a sustainable and low-carbon alternative to conventional fossil fuels, which, on combustion, produces bioenergy that is considered as a clean fuel for energy generation. Growing demand for energy across the globe is anticipated to boost the production of bioenergy through biomass and landfill gases, which in turn will also support the growth of the market for landfill gas. For instance, according to the International Energy Agency (IEA), bioenergy power production rose by approximately 5% in 2019, which is only a percent less than the 6% yearly power production rate required to meet the 2030 sustainable development scenario goals set.

Moreover, renewable power generation from landfill gas will have a wide impact on global warming emissions as it can limit the amount of CO2 released into the atmosphere. Furthermore, increasing the supply of renewable landfill gas would enable replacing carbon-intensive energy sources and significantly reduce global warming emissions. Thus, the increased demand for clean energy generation is expected to drive the growth of the global landfill gas market during the forecast period.


Global energy demand has seen an exponential increase over the last few years due to rapid urbanization and a rapidly growing population across the world. Most of the energy produced across the globe is from fossil fuels, which produce harmful GHG gases on burning. On the other hand, landfill gas is a carbon-neutral carrier and can make significant contributions in reducing greenhouse gas emissions. Moreover, The International Energy Agency (IEA) has introduced a biomass action plan. The plan is meant to promote the use of biomass energy produced through various processes, including landfill gas as an energy source with huge potential for power generation. Thus, the rising energy & power demand is expected to drive the growth of the global landfill gas market during the forecast period.


Landfill gas generation requires high capital investments and has high operating costs. Some of the major costs involved in landfill gas generation are acquisition costs, transportation costs, costs associated with pre-treatment technologies of landfill gas, and the Levelized Cost of Electricity (LCOE), a calculation of the cost of generating electricity at the point of connection to a load or electricity grid. For example, the LCOE of biomass-fired power plants ranges from 6 to 29 cents per kWh, based on capital costs and feedstock costs, which vary from place to place.


Favorable policies and regulations by governments across the world are expected to present lucrative growth and investment opportunities for vendors and new entrants in the global landfill gas market. Governments are promoting the adoption of landfill gas for power generation as it is a renewable energy fuel and can help prevent the release of harmful CO2 gases and GHG emissions into the atmosphere. For instance, in the US, the Environmental Protection Agency (EPA) introduced “The Landfill Methane Outreach Program (LMOP)” LMOP encourages the recovery and beneficial use of biogas generated from organic municipal solid waste (MSW). LMOP also provides technical assistance, guidance materials, and software to assess the potential economic feasibility of a landfill gas (LFG) energy project 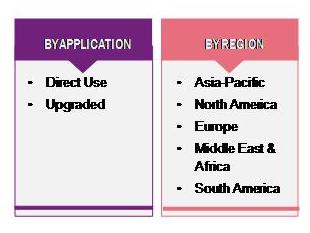 The global landfill gas market is classified based on application and region. By application, the global market has been divided into direct use and upgraded.

Asia Pacific is expected to dominate the global landfill gas market. Global market has been segmented into five major regions, namely, North America, Europe, Asia-Pacific, the Middle East & Africa, and South America. The landfill gas market in Asia-Pacific is estimated to account for the highest share of the landfill gas market. The region is one of the largest markets for landfill gas in the world. There is an increased demand for energy in the region because of the growing population and rising per capita disposable income in the region. Moreover, these rapidly growing economies in this region are also the top polluters in the world. Additionally, Asia-Pacific is estimated to showcase significant growth owing to the abundant availability of natural resources in the region. Emerging economies such as India and Indonesia promise sizeable growth due to proposed government legislation to increase investments in the landfill gas sector.

The prominent players operating in the global landfill gas market -

The report for the global landfill gas market of MRFR research covers extensive primary research. This is accompanied by a detailed analysis of qualitative and quantitative aspects by various industry experts and key opinion leaders to gain deeper insights into the market and industry performance. The report gives a clear picture of the current market scenario, which includes the historic and forecasted market size in terms of value and volume, technological advancement, macroeconomic, and governing factors of the market. The report provides comprehensive information about the strategies of the top companies in the industry and a broad study of the different market segments and regions.

At what CAGR is the Landfill Gas market predicted to grow during the forecast period?

Landfill Gas market is predicted to grow at Substantial CAGR through forecast period of 2022-2030.

Which region will lead the global Landfill Gas market?

What is the forecast period of Landfill Gas market research report?

The forecast period for Landfill Gas market research report is 2022-2030.

The global landfill gas market is expected to witness exponential growth during the forecast peri...