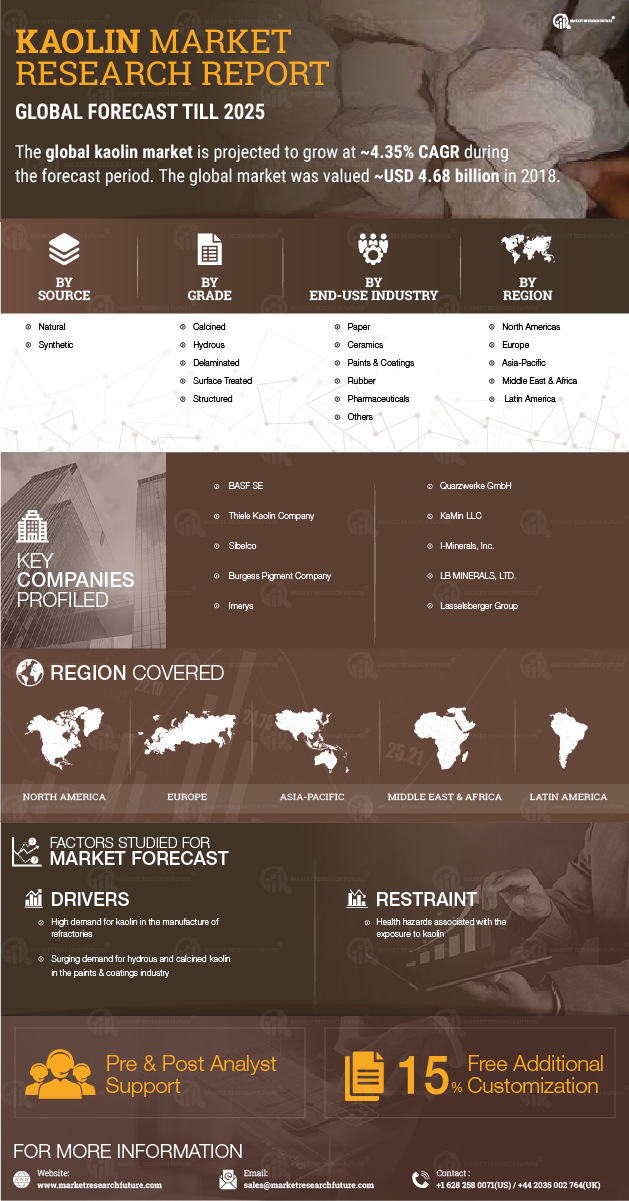 Kaolin Market Size was valued at USD 4.15 billion in 2021. The Kaolin market industry is projected to grow from USD 4.33 Billion in 2022 to USD 5.83 billion by 2030, exhibiting a compound annual growth rate (CAGR) of 4.35% during the forecast period (2022 - 2030). Kaolin is widely used in the paper industry, and demand for ceramic products has risen and is the key market driver enhancing market growth.

As a coating ingredient that offers excellent whiteness and enhances the look of finished paper products, kaolin is used more often in the paper industry. Around 1.9 million tonnes of kaolin were estimated to have been exported from the United States in 2021, with substantial amounts going to Mexico, Japan, and China. This kaolin was mostly used for paper coating and filling. Among the top nations that produce paper are China and Japan. Kaolin is used as a paper filler to lengthen the fiber and increases the printability of paper in addition to gloss, smoothness, and brightness. These are a few main variables fueling the anticipated expansion of the kaolin market's revenue.

Kaolin is utilized in PET and polyethylene films as an infrared absorber, allowing for the use of an additive for laser-mark molded packaging. By eliminating harmful ions from the polymer matrix, meta kaolinite can increase the resistivity of PVC cables. In coupling processes, hydroxyl groups on the calcined kaolin surface enhance the heat resistance and impact strength of polyamide. The electrical and polymer sectors are predicted to employ chemicals more often. Kaolin is a filler used in fiberglass to reinforce interwoven fibers. Additionally, it makes it possible to incorporate fibers into goods that need their plastic to be strengthened, such as boats, cars, aerospace, and aviation products, sporting and recreational goods, insulation made of fiberglass, tanks, and pipes made of fiberglass, circuit board manufacturing, fiberglass air filters, and fiberglass building. The chemical makeup of the fiber, the makeup and characteristics of its surface, and the textile structure of the reinforcing system all affect the kaolin concentration in the binder.

Figure 1: Revenue of the worldwide pharmaceutical market from 2001 to 2021 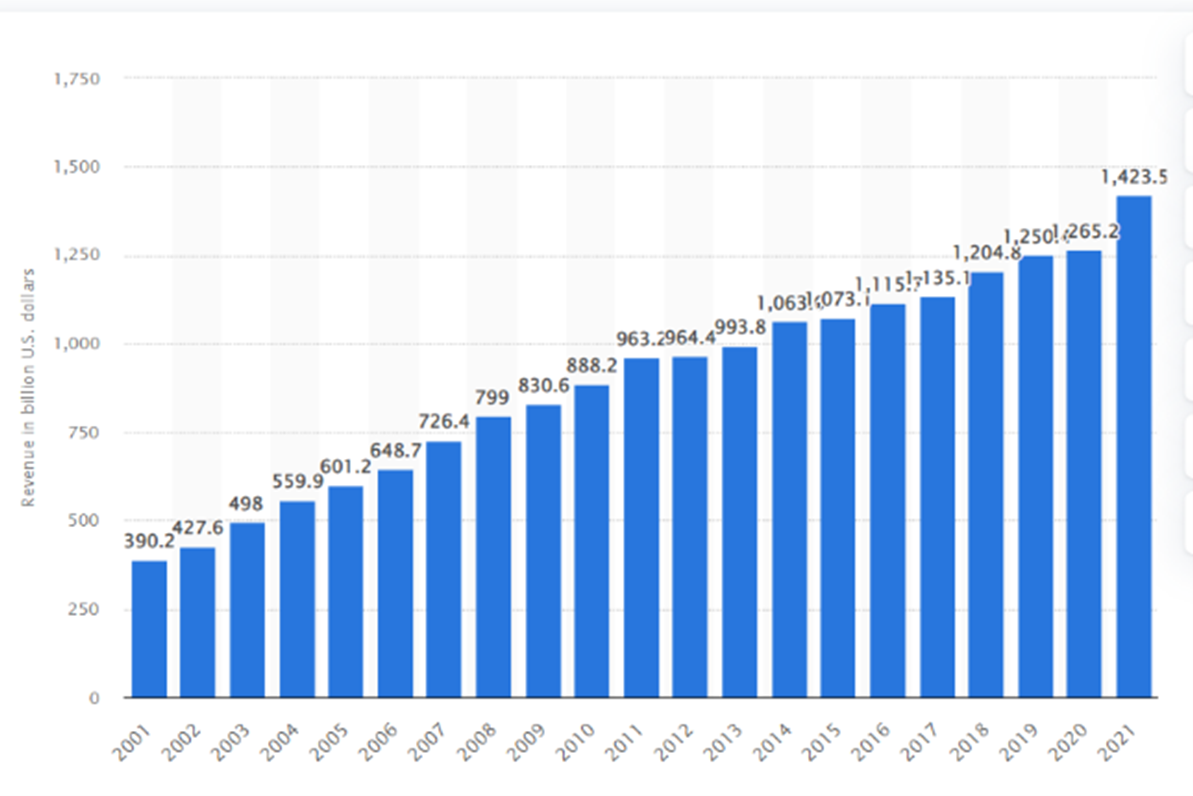 Kaolin's usage as a pesticide in suspension form in agriculture has grown due to its anti-microbial and insecticidal characteristics. Kaolin and Kaolin-pectin formulations used to treat small animals for diarrhea and blood loss are classified by the US EPA under inert materials and livestock medications manufactured from these substances. Kaolin is used as a processing aid in the apiculture industry to extract propolis, a substance resembling resin with therapeutic and anti-microbial qualities. In the upcoming years, stable expansion in the agriculture and apiculture industries would significantly raise demand for kaolin. The clay mineral has several uses in the pharmaceutical business, where it is a vital component of toothpaste, surgical pads, mouthwash, and other pharmaceutical goods. People with mouth sores use mouthwashes with kaolin as the ingredient because they offer a protective covering within the mouth. It is a widely utilized blood coagulant activator for reducing inflammation and avoiding thrombosis. Additionally, it is utilized as a hemostatic agent in gauzes and surgical pads and clinical laboratory tests to assess Activated Clotting Time (ACT). Between 2022 and 2030, an increase in incidents involving blood loss is anticipated to enhance the use of kaolin-based dressing materials in hospitals and clinics and propel the Kaolin market revenue.

Based on Grade, the  Kaolin market segmentation includes Calcined, Hydrous, Delaminated, Surface Treated, and Structured. Throughout the projection period, the revenue for the hydrous category is anticipated to expand quickly. Hydrous kaolin is manufactured using a time-consuming process that includes slurring, crushing, grinding, sifting, sorting, centrifuging, chemically, and perhaps to reach the desired particle size, purity, residue, and brightness concentrating, drying, and magnetic treatment. Hydrous kaolin is defined as maintaining 14% of the bound water of hydration in crude kaolin.

Based on application, the  Kaolin market segmentation includes Paper, Ceramics, Paints & Coatings, Rubber & Plastics, Fiberglass, and Others. In 2021, paper dominated the market and held a volumetric share of around 39.1%. By giving the paper different gloss levels, smoothness, brightness, opacity, and printability, kaolin coating enhances the aesthetic of the paper. Additionally, the substance helps improve the printability of paper by increasing ink absorption, holding on to ink pigment, reducing tinting propensity, and increasing roughness. The elements mentioned above support its substantial market dominance in the paper sector of the kaolin industry.

By Region, the study provides market insights into North America, Europe, Asia-Pacific and the Rest of the World. The Asia-Pacific Kaolin market accounted for USD 1.80 billion in 2021 and is expected to exhibit a significant CAGR growth during the study period. This is attributed to the growing incidence of spine abnormalities such as scoliosis, kyphosis, and lordosis, as well as an aging population across the Region. The kaolin market is expanding in the Asia Pacific due to economic expansion and fast industrialization. During the projected period, the area is anticipated to increase at the quickest rate. The primary drivers of the regional market expansion are expected to be China, India, Malaysia, Vietnam, and South Korea.

In 2021, the Europe kaolin market was predicted to overtake North America as the second-largest regional space. The introduction of the coronavirus in 2020 has had a substantial influence on the area's economy's growth. In the fiscal year 2020, major regional economies saw reduced industrial production, including the U.K., Germany, Italy, Spain, and others. The slow development immediately impacted the dynamics of the product in industrial production. In 2021, the regional growth showed hints of improvement. However, regional conflicts, such as the conflict between Russia and Ukraine, and rising energy costs are predicted to impede regional growth throughout the anticipated time frame. Further, the Germany Kaolin market held the largest market share, and the U.K. Kaolin market was the fastest-growing market in the European Region.

In 2021, the North American kaolin market region's revenue share was close to 13.4%. It is anticipated that the current U.S. administration's efforts to encourage the growth of green energy industries would significantly increase demand for kaolin-related goods. The regional solar sector's increased use of ceramic and ceramic-based fused materials will probably open up new business prospects for suppliers in the North American area. Further, the Canada Kaolin market held the largest market share, and the U.S. Kaolin market was the fastest-growing market in the European region.

Major market players are investing a lot of money in R&D to expand their product portfolios, which will spur further market growth for cervical fusion. With significant industry changes, including new product releases, contractual agreements, mergers and acquisitions, increased investments, and collaboration with other organizations, market participants are also undertaking various strategic activities to expand their presence. Kaolin industry competitors must provide affordable products to grow and remain in a market that is becoming increasingly competitive.

KaMin LLC offers mineral goods. The company offers a broad variety of kaolin clay for building and construction, industrial specialties, coatings, rubber and plastic, and beauty and health industries. Karin serves worldwide clients. Beginning January 1, 2021, or as markets and contracts permit, KaMin LLC and CADAM SA announced that they would increase the pricing for their performance minerals in their worldwide markets by 4 to 9%. These increases will change depending on the goods, packing, and shipping circumstances. This price rise is necessary to cover rising operations and mining costs, logistical costs, rising environmental costs, and requirements related to international product conformity.

The biggest manufacturer of white minerals in India, 20 Microns Ltd. offers cutting-edge goods in Functional fillers, Extenders and Specialty chemicals. The main business of the company is dealing in calcium carbonate. For selling kaolin goods in Europe, 20 Microns Limited teamed up with Dorfner GmbH (Germany) in February 2019. The plan will assist the firm in growing its kaolin operations in the European market.

Key Companies in the Kaolin market include

How much is the Kaolin market?

What is the growth rate of the kaolin market?

Which Region held the largest market share in the kaolin market?

Asia Pacific had the largest share of the kaolin market

Who are the key players in the kaolin market?

The hydrous Kaolin category dominated the market in 2021.

Which application had the largest market share in the Kaolin market?

The paper had the largest share in the Kaolin market.

Kaolin Market Outlook and Opportunities in Grooming Regions with Forecast 2030