IPS Displays Market Research Report: By Type (AH-IPS, E-IPS, and others), Application (Smartphone & Tablet, TVs, PCs, and others) and Region (North America, Europe, Asia-Pacific and Rest of the World) - Forecast till 2027 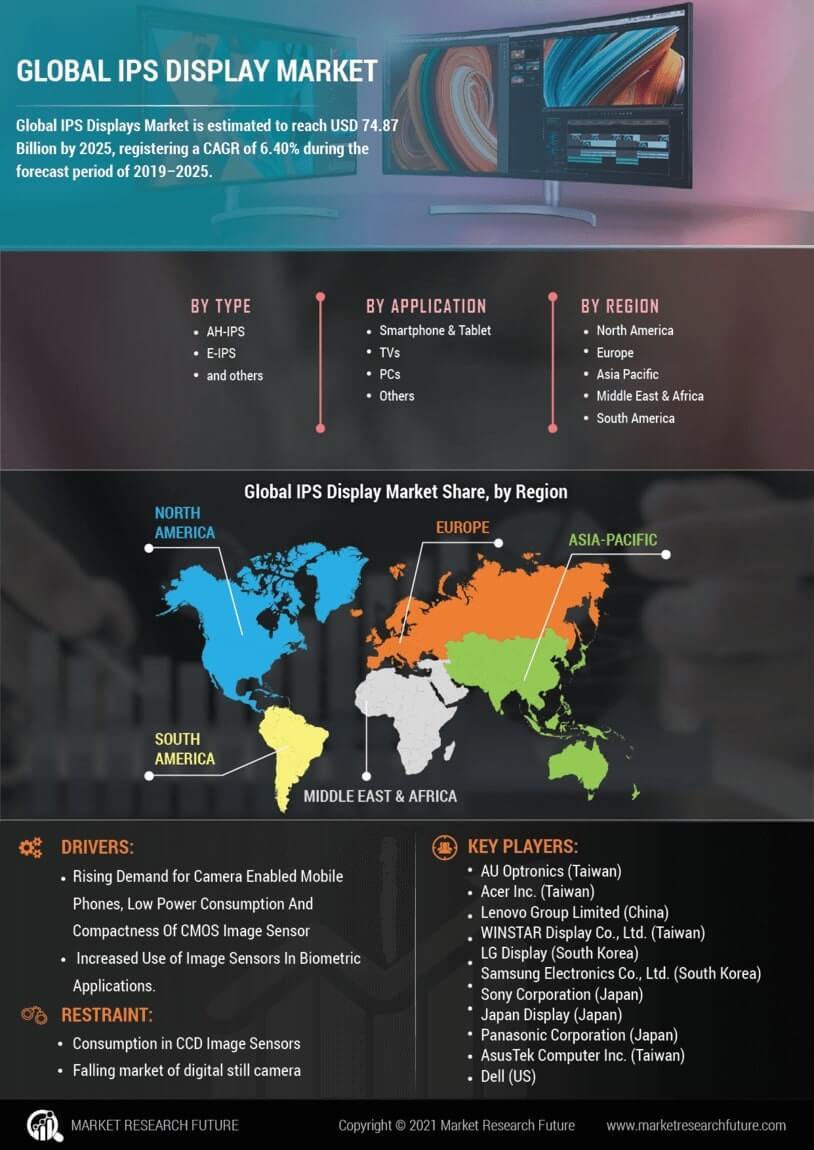 IPS Display Market is estimated to reach USD 74.87 Billion by 2025, registering a CAGR of 6.40% during the forecast period of 2019–2025. In-plane switching (IPS) is a sort of LED display panel technology that is used in conjunction with LCD panels. IPS panel displays are typically used by professionals due to their high cost and various advantages. For example, when compared to various vertical alignment (VA) and twisted nematic (TN) panels, these offer wider viewing angles to the user, provide faster response, and deliver better color/contrast resulting in IPS Display Market Demand and IPS Display Market Growth. These panels were created to address the shortcomings of the TN panel. One of the key advantages of IPS panels is that colors on an IPS monitor do not shift while viewing from a different angle as compared to the TN panels. Manufacturers have been able to build these panels displays in such a way that they can support professional color space technologies thanks to technological advancements; this is a major driver driving the IPS Display Market Trends globally.

One of the primary elements driving the market's IPS Display Market Growth is increased disposable income around the world. IPS displays also help professionals like CAD engineers, professional photographers, graphic designers, and video editors due to their improved contrast, speed, and resolution. LED displays are one of the most widely utilized IPS display technologies in a variety of applications. In comparison to other technologies, it has a bigger IPS Display Industry and IPS Display Market Revenue. The IPS Display Market has grown in recent years, but not in terms of innovation. Miniaturization of the parts required to produce a screen is one of the most recent breakthroughs in the IPS Display Market. IPS screens have become ultra-thin and have grown to enormous sizes thanks to miniaturization, allowing them to be placed on any surface, inside or out. IPS applications have grown in number as a result of technological developments such as improved resolution, increased brightness, product diversity, and the introduction of hardened surface IPSs and tiny IPSs. IPS displays are also commonly used for digital signage applications such as advertising and digital billboards, which helps IPS Display Market Demand and IPS Display Market Outlook stand out.

Because of their high production costs, these screens are seen in mid-range to high-end smartphones. Now more than ever, digital advertising is intelligent, tailored, and relevant. People are spending more time online than ever before, making digital advertising an excellent way to reach them across several devices and platforms. As a result, in recent years, online advertising has grown in popularity. In addition, the internet's widespread availability has driven a surge in digital advertising. Programmatic advertising is gaining traction as well. The use of automated tools and data to make media buying decisions without human intervention is referred to as programmatic advertising. As a result, the demand for displays, which were previously used to advertise items and brands in stores and commercial establishments, has drastically diminished.

In recent years, foldable displays have grown popular in tablets, smartphones, and notebooks. The Flexible display panels are made of flexible substrates that allow them to bend. The flexible substrate can be made of plastic, metal, or flexible glass; plastic and metal panels are light, thin, and robust, and are practically shatterproof. Foldable phones use flexible display technology, which is based on OLED screens. Flexible OLED display panels for smartphones, televisions, and smartwatches are being mass-produced by companies like Samsung and LG. However, from the perspective of end-users, these displays are not exactly flexible; producers bend or curve these display panels and use them in end products.

Due to the presence of many manufacturing businesses in the region that supply IPS display panels in various sizes according to their applications, Asia-Pacific accounted for the greatest market share during the historic forecast period. The market for IPS displays is being driven by expanding urbanization and rising disposable income among customers in the region. Furthermore, the growing population and demand for smartphones and tablets are moving the market forward. Acer Inc., AU Optronics, and others. Lenovo Group Limited, WINSTAR Display Co., Ltd, and LG Display are just a few of the prominent manufacturers in the region that are constantly investing in the development of new IPS display panel technology. Due to the rising population and increasing demand for better picture and color quality, China accounted for the highest share in the area, which is regarded as a driving factor for the market's growth in the region. However, due to shifting consumer preferences for color and resolution, India is expected to be the fastest-growing country-level market throughout the projected period.

The IPS Display Market is fiercely competitive, thanks to the existence of a slew of significant vendors selling their wares both domestically and internationally. The market looks to be moderately fragmented, with prominent competitors employing product innovation and mergers & acquisitions as a strategy. The major businesses continue to innovate and spend in R&D to offer a cost-effective product selection. There have been recent mergers and acquisitions among the major players, a tactic used by businesses to expand their consumer base. The major key players in the IPS Display market are as follows:

The research includes an analytical picture of the IPS display market share, as well as current trends and future projections, to show potential investment areas. The whole market potential is estimated to better identify profitable trends in the IPS display sector.

The paper gives information on major drivers, restrictions, and possibilities with full impact analysis. To measure financial competency, the current IPS display market is quantitatively analyzed. The report demonstrates the purchasing power of buyers and the market share of significant vendors. The study includes market trends as well as key vendor market shares. Several firms in the global body area network market are expanding their operations through new product development, strategic mergers, acquisitions, and partnerships, drawn by the market's growth and latent demand.

1. What are the primary market growth drivers listed in the report?

Mounting disposable income is one of the major market boosters listed in the report. Also, IPS displays can be used in mid-range to high-range smartphones, therefore the rising sales of smartphones all over the world can benefit the market.

2. What are the applications of IPS display mentioned in the report?

The main applications of IPS display are smartphone & tablet, TVs, PCs, and others.

3. What are the types of IPS displays

The types of IPS displays are e-IPS, AH-IPS, and others.

4. Which region was recognized as the most lucrative market in the year 2018?

Asia Pacific was recognized as the most lucrative market in 2018.

5. What efforts are being given by the prominent vendors in the global market?

Many of the prominent vendors are innovating and investing significantly in research and development to offer their customer base an affordable and a more appealing product portfolio. In recent years, the market has noted increasing mergers and acquisitions among the companies, a strategy that helps them solidify their position across the globe.