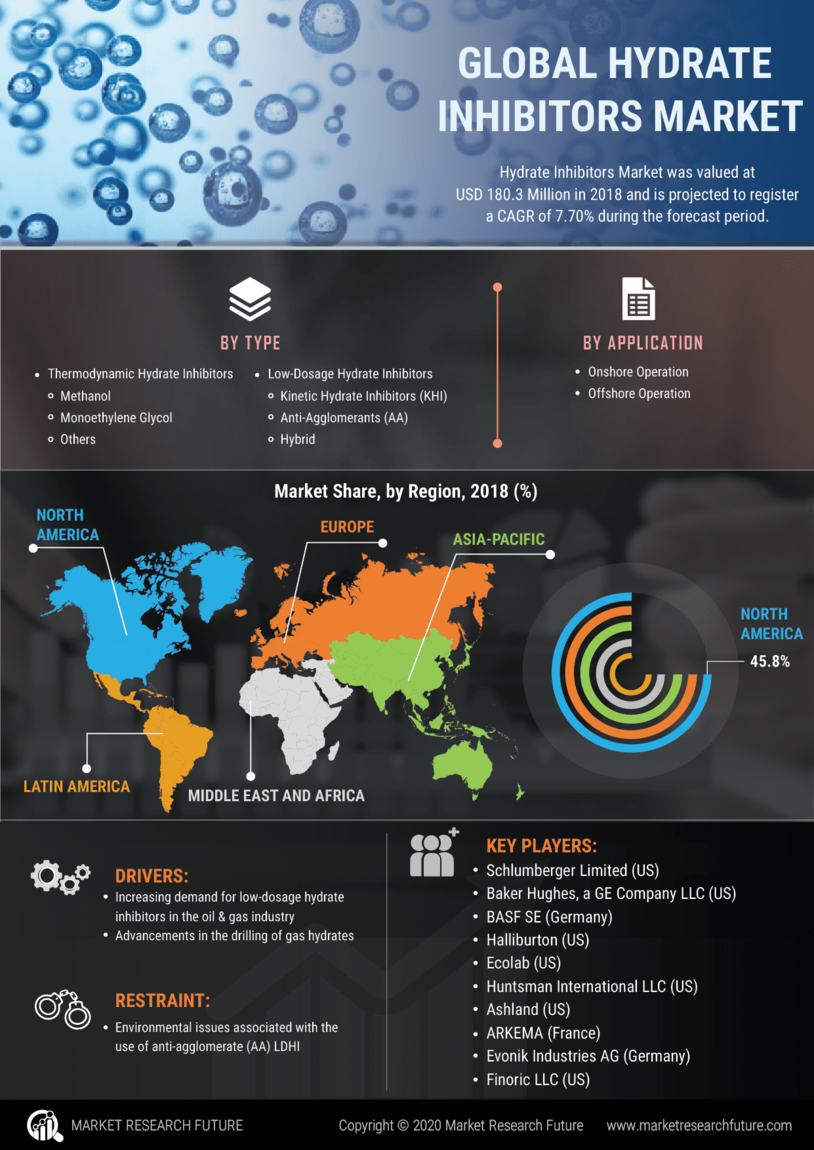 Hydrate Inhibitors Market was valued at USD 285 Million and is projected to register a CAGR of 7% during the forecast period.

Natural gas and crude oil are some of the most valuable industries that are capable of making a lot of money. These industries are running regularly, proving the world with fuel and so every device, machinery, or chemical needed in the process would be in high demand. Hydrate inhibitors are substances that are used during the process of extracting crude oil and natural gas. The hydrate inhibitors Market is expected to grow further shortly as it is of a greater application in industries. They are used to reduce hydrate formation during the extraction process and avoid problems such as blockage and formation of hydrate plug. As such hydrate inhibitors have many applications in many big industries.

The value of the Hydrate Inhibitors Market highly depends on the consumption of natural gas and crude oil and other products produced by other such industries that use hydrate inhibitors to reduce the hydrate formation in the process.

COVID-19 has affected various markets severely while some markets got a boom due to its occurrence. Even during the pandemic, the whole world was using fuel as before. There was a moderate effect of the outbreak of a deadly virus and the imposition of a complete lockdown around the globe. Moreover, the value of hydrate inhibitors depends on the production of crude oil and natural gas. Uses of natural gas and products of crude oil do not affect the hydrate inhibitors market directly as the hydrate inhibitors serve their purpose during the process of production. And demand for fuel is running high in the world.

During the pandemic, people around the globe are using a personal vehicle for moving around more than public transport which again contributes to the higher consumption of fuel.

Drivers: The factors that derive the growth of a market are called drivers. The hydrate inhibitors market is growing at a very good rate and the factors contributing to its growth are:


Opportunities: As hydrate inhibitors have necessary applications in oil production industries and mechanical industries, opportunities for the Hydrate Inhibitors Market can be expected high.


Restraints: The hydrate inhibitors play an important role in big commercial industries such as the production of crude oil and natural gas which makes them a necessary element of the process. However, some restraints of hydrate inhibitors come in the way of the growth of the market.


Challenges: Challenges are always there to make better efforts and produce better results every other try. The biggest challenge for the Hydrate Inhibitors Market is the increasing demand in the near future. Making new strategies to meet the demand could only solve the problem.

Regulations over the hydrate inhibitor market are different as certain rules and regulations are applied at different stages of production and sales. These rules are important to regulate the proper flow of work in the market and so no misuse of the chemicals is made.

Constant developments have been made in the Hydrate inhibitors market as hydrate inhibitors are an important element that is used in big commercial industries. Advancement in its formulations to make its uses and results better has been done and that advancement has derived the growth of the market.


According to India Brand Equity Foundation (IBEF), Oil Industry Development Board (OIDB) has sanctioned US$ 37.04 million for the National Gas Hydrate Program (NGHP) in 2016. Activities like this program are shared between OIDB, ONGC, Oil India, and Indian Oil Corporation for the development of hydrate inhibitors offshore.

The hydrate inhibitor market report covers all the aspects that introduce the market overview and give an understanding of the status of the market. This report covers topics such as market drivers, restraints, market challenges, segment overview, regional analysis, and all other subjects that describe the trends and development of the market.

What is the value and growth rate projected for the hydrate inhibitor market till 2025?

hydrate inhibitor market is expected to grow at the rate of 7.70%.

Which region among all holds the title of the global leading region of the hydrate inhibitor market?

What are the major drivers of the hydrate inhibitor market?